The Grand Duke of Microscopica

I have recently become aware of the phenomenon, apparently of long standing, of various cranks, misfits, wags, and malcontents seceding from their home country and founding their own sovereign nations.

These so-called "micronations" are universally ignored by the parent country, but this hasn't stopped the aforementioned cranks et al. from founding a good many of them.  (See the Wikipedia list, with descriptions, here.)  The commonality across the lot is that the leaders seem to trumpet fairly loudly but then make sure to fly under the radar when it comes to potential unpleasantness.  For example, the Principality of Hutt River (formerly a part of Australia) regularly has its taxes paid to Australia by its founder, Crown Prince Leonard I (formerly Leonard Casley), with the proviso that the tax check is to be considered "a gift from one world leader to another."

I find this whole phenomenon simultaneously charming and perplexing.  Perplexing because (with the exception of the handful who have clearly set the whole thing up as a joke), these people seem to take themselves awfully seriously.  Consider the Principality of Sealand, which consists solely of one abandoned military staging platform in the North Sea.  Take a look at Sealand's webpage (of course it has a webpage).  Reading through that, and the other assorted websites for micronations, leaves me thinking, "Are you people loonies?  Or what?" 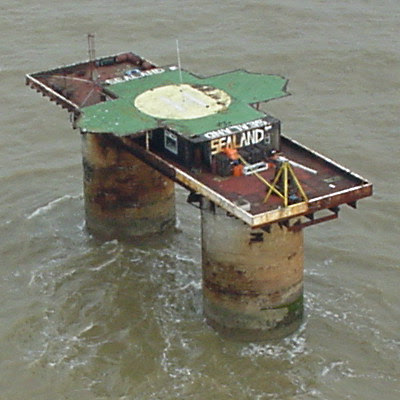 The Principality of Sealand [Image licensed under the Creative Commons Ryan Lackey, Sealand aerial view, CC BY 2.0]
On the other hand, it is somewhat charming, in a twisted, Duchy of Grand Fenwick sort of way.  The majority of the self-proclaimed nobility from micronations seem to be doing no real harm.  Let them issue their own currency, stamps, and legal documents.  Hey, if it gives them a hobby, then why not?  I don't think it's really any crazier than many other hobbies, such as collecting beer bottle caps or doing Civil War battle re-enactments.

And then, the depressive existentialist side of my personality has to pipe up and ask, "Why is this so different from what all countries are doing?"  Countries only exist because a group of people with adequate weaponry have decided to band together, declare that they have the right to draw a line on the ground across which None Shall Pass, and tell everyone what they can and can't do.  The lines are mostly arbitrary, and a good many of the laws seem to be as well.  (Imagine trying to explain to an alien why on the north side of an invisible line on the ground, LGBTQ people can marry, and on the south side, they can't.  I think all you'd get from the alien was mild puzzlement, up until the point where he decides that there really isn't any intelligent life on Earth, and vaporizes you with his laser pistol.)

So then, what's the difference between micronations and regular nations?  There's this thing called "recognition" -- that other countries recognize the existence of a legitimate nation.  So, because the United States is pretending not to notice the Republic of Molossia (a totalitarian dictatorship, formerly part of Nevada), it doesn't exist?  It's a little like a four-year-old covering his eyes and concluding that everyone he can't see is gone.

Of course, recognition isn't everything.  There are also diplomatic ties -- who are you willing to negotiate with?  But that gets a little dicey, too, because there are countries that clearly exist by most people's definition (e.g. Cuba) with whom we have no diplomatic relations.  So, you only exist if (1) we are willing to admit you exist, and (2) we both agree to send people to meet at a five-star hotel to drink hundred-dollar-a-glass wine and discuss how much our people want to cooperate, despite our differences and our occasional desire to annihilate each other?

Sorry for appearing cynical.  But so much of politics seems to me to be high-stakes game playing, not so very far advanced from the Inner Circles and Exclusive Clubs that middle schoolers dream up, with the only difference being that middle schoolers aren't capable of blowing each other up with tactical nuclear weapons.  Yet.

Anyway, my point is that other than scale, there seems to be little to separate the micronations from the ordinary type.  And given the current economic and ecological mess that the United States is sitting in, I'm thinking that maybe I should secede, too.  I will only continue to pay taxes as a Generous Donation Of Aid To My American Friends, and Guinness will be appointed Chief Pooch In Charge Of Tennis Ball Chasing And Strategic Naps.  Cleo will clearly be Court Jester.  I, of course, will now go by the moniker King Gordon I, "the Magnificent," of the Sovereign Kingdom of Perry City.  Carol already thinks she's the queen, so her status won't change much.  It does, of course, open up a serious possibility of a war of succession when I die, because I don't think that Duke Nathan of Houston will easily give up the throne to the heir apparent, Crown Prince Lucas of Fall Creek, given that they didn't get along as toddlers and things have only gone downhill since then.