Sophocles was a classical Greek playwright, whose beautiful and haunting tragedies Oedipus Rex, Antigone, and Oedipus at Colonus are standard fare in college literature classes.  Those three plays are his most famous, but there are four others still read and performed -- Ajax, The Women of Trachis, Electra, and Philoctetes.

Those seven plays are all that is left of the 120 plays he wrote.

Nineteen of Euripides's plays survive, out of nearly a hundred.  Seven of Aeschylus's plays still exist, from an estimated eighty.  Nothing is left of the work of the great scientists Anaxagoras, Eratosthenes, Aristarchus, and Thales except for fragments.

What we have from the classical Greek and Roman world is just what happened to survive, sometimes by design and sometimes by pure accident.  Fires claimed a great many ancient manuscripts, some of which were set deliberately.  The Great Library of Alexandria, which housed huge numbers of these works, endured loss after loss.  A fire set by the troops of Julius Caesar in 48 B.C.E. that was intended to destroy Egyptian ships at the port spread to the rest of the city and burned an estimated forty thousand scrolls in the Library.  Repeated sieges of the city under the Roman Emperors Aurelian and Diocletian three hundred years later destroyed a good percentage of what was left.  The rest of the surviving manuscripts met their end under two onslaughts from organized religion.  The first came in the early fifth century C.E. from the Christian Bishop Cyril, who not only worked to destroy the remnants of the Library, but had one of its leading scholars -- Hypatia -- brutally murdered by a mob.  (Cyril, on the other hand, went on to be canonized.)  The second came after the Muslim takeover of Egypt in the seventh century C.E., when the Caliph Omar ordered all of the remaining scrolls collected and burned for fuel.  Omar famously remarked, "If those books are in agreement with the Quran, we have no need of them; and if they are opposed to the Quran, destroy them."

What we know of pre-Dark-Ages European science and literature is so sparse that "fragmentary" seems a significant understatement.  It's as if we were trying to understand the works of William Shakespeare while having in hand Timon of Athens, Cymbeline, the last twenty pages of Coriolanus, and five randomly chosen sonnets.

There still remains some shred of hope for recovering some of this lost wealth of knowledge, however.  Researchers believe they have found pieces of the second century B.C.E. astronomer Hipparchus's lost manuscript Star Catalogue on a palimpsest -- a piece of parchment that had been erased for reuse.  Because parchment was expensive (it was made from specially tanned lamb or calf skin), used parchment was often scraped to remove the previous writing and then repurposed.  Using multispectral imaging, non-destructive technique for picking up faint traces of ink on manuscripts, a team from the Université Sorbonne and Cambridge University have uncovered what seems to be the beginning of Hipparchus's lost work in the background of the Codex Climaci Rescriptus, a Syriac Greek document from the eleventh century C.E.

You have to wonder what other gems from the ancient world lie hidden on palimpsests. 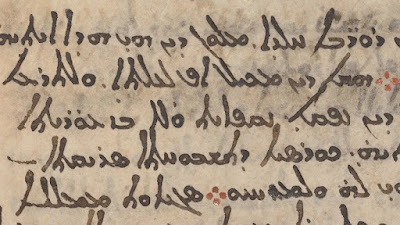 A piece of the document, showing the background writing that appears to be the introduction to Hipparchus's Star Catalogue

How amazing would that be to reclaim some of these windows into the past from manuscripts currently sitting in libraries and museums?  What would we learn about our forebears' history, science, and philosophy?  Until we can invent a time machine and go back to visit the Library of Alexandria -- the pipe-dream of many a scholar -- the best we can do is apply our modern technology to what we have.

And to judge by the recent discoveries, there may be more to find than we ever realized.