The walk of life

There are countless different actions we take every day that we do so automatically we're hardly even aware of how complex they are.

Take, for example, walking.  Walking takes the coordination of dozens of muscles, each of which has to contract and relax in exactly the right sequence to propel us forward and adjust for irregularities of the terrain we're navigating.  To avoid falling, we need to keep our center of gravity over our base of support, which is aided by adjustments in posture and such counterbalancing movements as swinging the arms.  But in order to do that we have to keep track of proprioception -- our sense of where our bodies are -- which is accomplished by a whole array of sense organs, including vision, the tactile sensors in the skin, and the semicircular canals -- the balance organs in the inner ear, which work a little like a carpenter's level.

And all of those -- the sense organs that keep track of what's going on and the muscles that use that information to contract and relax at the right times -- are linked by an astonishingly complex set of nerve relays and circuits coordinated by our brains.

All of that, just to get up and walk across the room.

The reason the topic of locomotion comes up is a paper a couple of weeks ago in Current Biology describing a single-celled protist called Euplotes eurystomus that has fourteen leg-like appendages -- and is able to walk.

The scientists studying Euplotes found that the appendages had thirty-two different configurations, which they called"gait states," and that somehow, the little creature was keeping track of which sequence of gait states allowed for the most efficient walking.  It turned out that the internal scaffolding of the cell, made of hollow threads called microtubules, created cross-links from each appendage to the others.  The amount of tension in the microtubules allows the organism to coordinate the movement of all fourteen appendages.

"The fact that Euplotes' appendages are moving from one state to another in a non-random way means this system is like a rudimentary computer," said Wallace Marshall, of the University of California - San Francisco, who co-authored the paper. 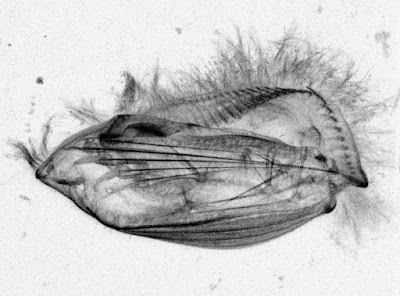 Euplotes eurystomus [Image from Larson & Marshall, UCSF]
All of this puts me in mind of the idea of irreducible complexity -- that there are structures in living organisms that would not work if all the parts hadn't been created all at the same time.  It's a favorite salvo of the young-Earth creationists and proponents of intelligent design.  The battle cry usually goes something like, "One percent of an eye isn't good for anything."  Richard Dawkins does a brilliant takedown of this entire argument in his tour-de-force exposition of the evolutionary model The Blind Watchmaker, in which he demonstrates that "one percent of an eye" -- a simple, light-sensing patch -- is indeed better than nothing, and that once you have that one percent, incremental gains in acuity can lead to the complex eyes now found in the animal kingdom.  (More fascinating still, the ability to sense light is such a powerful evolutionary driver that this process may have occurred, independently, dozens of times in different lineages.  For a wonderful overview of the evolution of eyes, check out this article from 2017 in the journal Nature.)
So locomotion, like vision, isn't irreducibly complex at all.  It's complex, yes; but hardly irreducible, because a single-celled organism is able to use chemical reactions and a network of microtubules to accomplish something very much like walking.  Our ability to coordinate motion has a history going back billions of years, during which time it has evolved into an action so complicated and intricate it's a damn good thing we don't have to keep track of it consciously.
Think about that next time you move your muscles.
****************************************