A hand and a message

One of the most enduring mysteries, both in history and in linguistics, is the Basque people of northeastern Spain.

For many years, it was thought that because they speak Euskara -- a linguistic isolate, certainly not Indo-European and seemingly unrelated to any other known language -- that they were physically unrelated to the rest of Europeans as well.  That's proven to be untrue; their genetics are markedly similar to other western Europeans, including a high prevalence of the R1b-DF27 Y-DNA haplogroup, found throughout Spain and southern France.  While there is some evidence that the Basque people are remnants of a Paleolithic population of western Europe, there's enough similarity with the surrounding population that this question is considered far from settled.

There's no doubt they've been genetically isolated for a long time, though.  One good indicator is their abnormally high frequency of the Rh negative blood type allele.  If you, or one of your parents, is Rh negative, there is a great likelihood that you have ancestry in northern Spain or southwestern France.  (My mom, who was Rh negative, was nearly a hundred percent of French descent, mostly from western France -- I'm quite certain she has some Basque ancestry back there somewhere.)  This has a significant downside; the danger of Rh incompatibility disorder, which occurs when a negative mother conceives a positive fetus (i.e. the father is positive).  When that happens, the mother's immune system can set up a reaction against the baby's blood and destroy it.  It's what killed my sister, Mary Margaret -- when she was born, in 1945, she was premature and severely anemic, and only lived a couple of days.  Between her birth and mine, in 1960, the RhoGAM injection was developed, which suppresses that part of the mother's immune system and prevents the damage.

That injection is why I'm alive today.

In any case, there's no doubt the Basques are a unique people.  The origin of their gene pool, culture, and language are still shrouded in mystery.  But a discovery last year near Pamplona may end up shedding some light on their history.

Called the "Hand of Irulegi," it's a bronze piece thought to be about two thousand years old.  This is cool enough in and of itself, but recent analysis has shown that it has an inscription, seemingly in proto-Basque, the language of the Vascones -- the Iron Age tribe encountered in northeastern Spain by the Romans, and who are thought to be the ancestors of the modern Basques.

It had been thought previously that the Vascones had little in the way of written language -- no traces of it had been found except for occasional one-word inscriptions on coins.  So almost nothing is known about the language they spoke (except, as previously noted, that it was definitely non-Indo European).  The first word in the inscription on the Hand of Irulegi is sorioneku, almost certainly the root word of modern Euskara zorioneko, meaning "luck" or "a good omen." 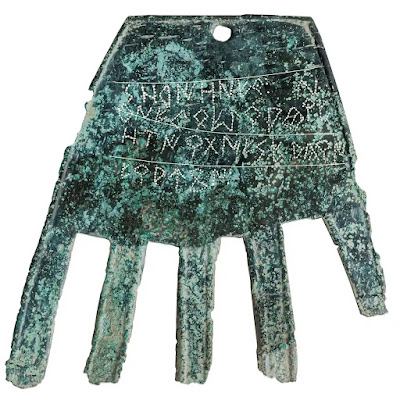 It's worth being cautious, though.  Unfortunately, such claims have been made before -- and have turned out to be worse than false, actually fraudulent.  Two years ago, two archaeologists were fined and given short jail sentences for faking artifacts and claiming that they were evidence of an early Basque written language.  So following the "once burned, twice shy" rule, the archaeologists and linguists studying the Hand of Irulegi are proceeding carefully.

But if it holds up under scrutiny, it will be a pretty remarkable discovery.  The early history and linguistics of the Basque people have been huge unanswered questions before now, and any pieces we can add to the puzzle will help clarify the origins of what is undoubtedly one of the most fascinating cultures in Europe.