I was just thinking yesterday that it'd been a long time since I'd seen a good example of the kind of loony New Age woo-woo I seemed to run into on a daily basis when I first started Skeptophilia twelve years ago.  "Maybe," I thought, "people have moved beyond all that nonsense into a more scientific, skeptical, rational way of looking at the world."

By stating that aloud, I must have tapped into some kind of Quantum Vibration Frequency Resonance Field of Actualization, because while idly perusing TikTok not an hour later, I stumbled upon a post from a guy who is like what would happen if you gave Simon Pegg a hit of acid and then told him to do his best impression of Deepak Chopra.

His name is Matt Cooke, and he calls himself a "manifestation coach."  Lest you think I'm exaggerating in my description, here's a transcript of the post in question:

If you understand the power of the quantum field, you hold in your hands the secret of manifestation.  I'm going to simplify what the quantum field means, and how you can use it as a tool to manifest anything in your life.  So quite simply, you'll hear people say either the quantum field or the unified field.  What that basically is is an invisible field of energy carrying information and frequency that is invisible to our five senses but is all around us in space that we can't see.

People say that, do they?  Not scientists, presumably, just "people."  Do go on.

What people don't realize, though, is that we are also an extension of that field, because we're just energy.  The human body is just a dense form of energy moving at a very slow rate of vibration.  We in fact vibrate in and out of the quantum field eight times every second.

I've been in this business long enough that as soon as he said "eight times every second," I immediately knew where he'd gotten that number from, and it wasn't from a Quantum-Field-O-Meter, or anything.  He's almost certainly referring to a woo favorite, the Schumann resonances, which somehow got wrapped up in mystical goofiness despite the fact that it's actually a very real electromagnetic phenomenon.  It's a resonance between the Earth's surface and the conductive layer of the atmosphere (the ionosphere), which has resulted in a standing wave -- an electromagnetic field pulse that has a fundamental frequency of 7.83 Hertz (i.e. just shy of eight times per second).  It's been nicknamed "the Earth's heartbeat," which is an unfortunate choice of phrase (second only to physicist Leon Lederman's choice of "the God particle" as his nickname for the Higgs boson), because it encourages woo-ish types to see the Schumann resonances as being evidence of a global consciousness or whatnot, when in reality, as a phenomenon it's about as conscious as a pendulum swinging on a string.

But back to Cooke:

The way the field works is that it is outside of three-dimensional reality.  It's something called the fifth dimension.

Presumably not related to the people who sang "This is the Dawning of the Age of Aquarius," although you can see how one might be confused on this point.

The fifth dimension quite simply is beyond time.  Time is infinite.  Meaning that if time's infinite, there are endless infinite opportunities that exist right now.  So anything you desire is there electromagnetically.

This is why people never change.  This is why people continue to attract more of the same stuff into their lives.  How we think and how we feel is how attraction works.  A thought is an intention, a feeling is an emotion.  So if right now you are in lack and hating life, subconsciously you are creating those same thoughts and you're feeling the same way.  You're vibrating in and out eight times a second, the field doesn't respond to what you want, it responds to who you're being.  This is why you hear people say, if you want to manifest you need to become it right now.  If you are seeking something right now in your life, if you change how you think and how you feel, you will broadcast a new electromagnetic signature into the quantum field.  Right?  You'll be drawing back to you a new state of being.  Basically, you'll be reprogramming your vibration.  If you change your vibration, you change your personality, and it's your personality, who you are, that creates your outside world.  Your inside world creates your outside world, and that is how the quantum field works.

Allow me to direct your attention to the Wikipedia article on quantum field theory, wherein you will quickly find that this is not, in fact, how the quantum field works. 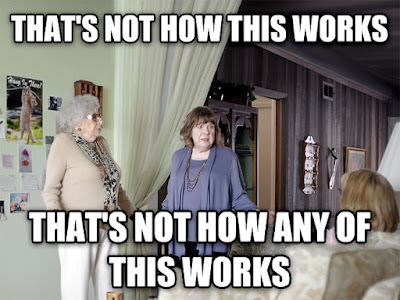 Look, it seems like this guy's heart is in the right place, and that he honestly wants to help people.  And I certainly like his take on how to make the world a better place more than I do the evangelical Christians' approach, which is to alternate between praising the God of Unconditional Love and smiting the absolute shit out of anyone who is not also an evangelical Christian.

What bothers me about people like this is that they're trying to gain credence for their claims by adding a scientific, physics-based spin on them, and end up using technical terms in such a bizarre way that large numbers of people now have no idea whatsoever what those terms actually mean.  And I do mean large numbers; Matt Cooke has over 144,000 followers on TikTok.  And he, of course, is small potatoes compared to the champion purveyor of quantum woo, the aforementioned Deepak Chopra, who is so renowned that someone created a Random Deepak Chopra Quote Generator that produces pearls of arcane wisdom so similar to the real thing that I defy anyone to tell the difference.  (Here was mine for today: "Infinity differentiates into the expansion of brains through the activation of love.")

So, by all means, Mr. Cooke, keep trying to help people live their best lives.  But leave the quantum field to the quantum physicists.  It doesn't help your case, and to anyone who has ever taken a college physics course, it makes you sound like a snake oil salesman.  Thanks bunches.