The human psyche is a fragile thing.

I was going to start that sentence with, "At the risk of being called a snowflake...", but then I decided I don't give a flying rat's ass if anyone does call me a snowflake.  Or "woke."  "Snowflake" has become some kind of jerk code for "someone who cares deeply how others feel," and "woke" for "awareness that others' experience and perceptions are as valid as my own, even if I don't share them," and on that basis I'm happy to accept the appellation of Woke Snowflake.

The fact is, all of us, even Un-Woke Non-Snowflakes, can be hurt.  It's all too easy.  Whether we react to that hurt by crying, retreating, laughing it off, or getting angry, the fact remains that none of us are impervious to what others say and think.  It's why dealing with bullying is so critical, and the correct response is not to tell the victim "toughen up, develop a thicker skin, grow some balls," or whatever, all things I was told repeatedly when I was a child.  Unsurprisingly, none of that sage advice had the slightest effect, other than letting the bullies know that no one was going to do a damn thing about it.  It's amazing the number of people who don't recognize this for what it is, which is a game of "blame the victim."

For what it's worth, the correct response is for someone with appropriate authority to tell the bully, "This stops, and it stops now.  I will be watching you."

It's why when I was asked a while back what were the three most important words you could say to someone other than "I love you," my response was, "You are safe."  I never felt safe when I was a kid.  And if you don't think that leaves a mark on someone that persists into adulthood, you are sadly mistaken.

It's why I was sickened by the revelation this week that British actor Kit Connor, best known for playing the character of Nick Nelson on the lovely coming-of-age series Heartstopper, was being harassed online by "fans" who accused him of "queerbaiting" -- pretending to be queer (or being cagey about it) in order to benefit from the cachet of being associated with the LGBTQ community without committing himself outright.  Connor ignored the accusations for a while, but they became so strident that he got onto Twitter on Halloween and posted: 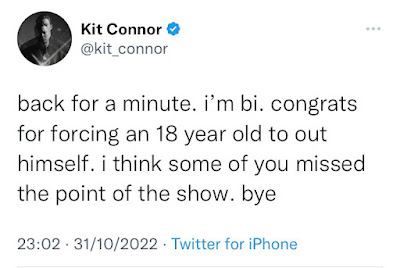 The number of ways this is fucked up leaves me not knowing where to begin.  Apparently part of the firestorm started with photographs of him holding hands with actress Maia Reficco, which adds a whole nasty gloss of "bi people in straight-presenting relationships aren't actually queer" to a situation that is already ugly enough.  I find this infuriating (for obvious reasons); we bisexual people are under no obligation to meet some kind of queerness litmus test set by someone -- anyone -- else.

The deeper problem here, of course, is that nobody should ever push someone to come out before they're ready.  Ever.  This sort of thing happens all too often with actors and musicians, and not just about sexual orientation but about everything.  Fans become desperate to peer into their lives, as if somehow enjoying their skill, talent, and hard work when they perform justifies forgetting that they are real humans who need privacy and have the right to reveal about their personal lives exactly what, when, and how much they choose.  At the far end of this horrible scale is the phenomenon of paparazzi, parasites who are fed by fans' insatiable appetite for lurid details, accurate or not.

The worst part in this particular case is that the lion's share of the accusations of queerbaiting Connor faced came from people who are LGBTQ themselves.  People who should fucking well know better.  People who themselves have undoubtedly faced harassment and discrimination and unfair social pressures, and now have apparently forgotten all that and turned on someone whose only crimes were (1) playing a bisexual character in a television show, and (2) wanting to come out by his own choice and at his own time.

How dare you force someone into this situation.

I can only hope that Kit's trenchant "I think some of you missed the point of the show" drove the message home with these people.  I also hope that the harm done to Kit himself, and potentially to his relationships (whatever those are), doesn't leave a lasting mark.  To the fandom's credit, there was a huge groundswell of people supporting him unconditionally and decrying what had happened, and with luck, that did enough damage control to lessen the pain he endured.

So for heaven's sake, people, start thinking before you speak, and realize that words can do incalculable harm.  Keep in mind that humans are fragile creatures who deserve careful handling.  Always err on the side of compassion.

And if you can't do all that, then at least have the common decency to keep your damn mouth shut.