Sometimes I need to tell y'all about a new discovery not because it's weird or controversial, but simply because it's cool.

I owe my awareness of this one from my twin brudda from anudda mudda, Andrew Butters of the brilliant blog Potato Chip Math (which you should all subscribe to immediately).  Andrew is not only smart and a great writer and funnier than hell, he also knows my capacity for geeking out over anything related to languages, so when he found this, he sent it on to me instantaneously.

It's about the discovery of an ancient ivory comb near Tel Lachish, Israel.  It was a cool enough artifact, dating from about 1,700 B.C.E., but its coolness factor increased by a factor of a thousand when it was discovered that it was inscribed with seventeen tiny letters. 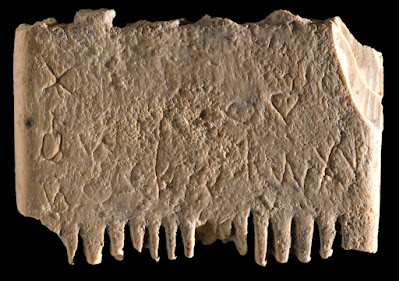 The inscription is in Canaanite, and says: "ytš ḥṭ ḏ lqml śʿ[r w]zqt," which translates roughly to, "may this tusk root out lice of the hair and the beard."  If you're wondering what happened to all the vowels, they're missing because written Canaanite was an abjad -- a writing system wherein vowels are left out unless they occur first in a word.  (Modern abjads include Hebrew and Arabic, both of which are in the same family as Canaanite.  If you're curious about abjads and other writing systems, I did a post about that topic back in January.)

There are a lot of things that are cool about this.  First, it's mildly amusing that one of the earliest inscriptions ever found has to do with getting rid of lice.  Be that as it may, the (much) more awesome piece is that this is the earliest known inscription in the alphabet that would eventually morph into not only Arabic and Hebrew, but Cyrillic (used in several Slavic languages), Greek, and eventually, English.

"This is the first sentence ever found in the Canaanite language in Israel," said archaeologist Yosef Garfinkel, of the Hebrew University of Jerusalem.  "There are Canaanites in Ugarit in Syria, but they write in a different script, not the alphabet that is used still today…  The comb inscription is direct evidence for the use of the alphabet in daily activities some 3,700 years ago.  This is a landmark in the history of the human ability to write."
An amusing postscript is that the next oldest inscriptions ever found in Canaanite were on a 3,500 year old lead tablet found near Mount Ebal in Israel, and said, "Cursed, cursed, cursed—cursed by the God YHW.  You will die cursed.  Cursed you will surely die.  Cursed by YHW—cursed, cursed, cursed."
So that's cheerful.  I probably don't need to mention that "YHW" is a transcription of the Hebrew name for God, usually rendered either "Yahweh" or "Jehovah" in English.  It's a little humbling that the oldest surviving written texts we know of had to do with (1) ill-wishing an enemy, and (2) getting rid of parasites.
Although if you'll look around you at the behavior of people now, you'll probably be struck by the fact that not all that much has changed.
So that's our cool discovery of the day, and thanks to Andrew for bringing it to my attention.  Interesting that the letters I'm typing right at this moment have a history that stretches back over three millennia, back to inscriptions like this one.
I just hope what I'm writing these days is more edifying than "Use this comb to remove lice" and 'You will die cursed."
****************************************