Our minds tend to boggle when numbers get too large or too small.

The same thing happens on the small end.  I remember trying to get my students to grok the difference between the sizes of small things -- say, an amoeba, a virus, a DNA molecule, and an atom.  My analogy for the size of the atom is that if you had as many grains of sand as there are atoms in a typical raindrop, you'd have enough sand to fill a trench a foot deep, a mile wide, stretching from New York City to San Francisco.

It was a good "oh wow" moment, but once again, I'm not sure how much good it did to fight the general trend of our not being able to conceptualize things that are very far outside of the scales we're used to.

The more we find out through science, though, the wider the actual scales of our understanding need to grow.  This is why if you want to have a prayer of getting anywhere in science, you need to understand scientific notation -- a way of notating very large or very small numbers, such as the speed of light, which is 300,000,000 meters per second -- or, as it's put in scientific notation, 3x10^8 meters/sec.  The bigger (or smaller) the numbers get, the more useful scientific notation is; take, for example, the distance to the Andromeda Galaxy, which is 2.4x10^19 kilometers (24 followed by eighteen zeroes).  With something that large, just counting the zeroes to get an idea of what magnitude you're talking about becomes unwieldy. 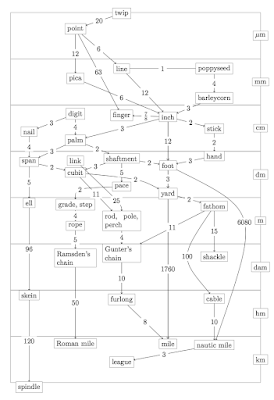 On the other hand, for unwieldy, you can't beat the English units of measurement. This is a chart of the relationships between the ones for length. The rest of them are just as bad. [Image licensed under the Creative Commons Christoph Päper, English length units graph, CC BY 3.0]

The same thing happens on the other end of the scale.  The width of one of your DNA molecules is about two billionths of a meter; in scientific notation, 2x10^-9 meters.  (The negative sign means the decimal point is moved to the left; this is 0.000000002 meters.)

To obviate the need for such large exponents, there are prefixes used to get rid of some of the zeroes.  Some are familiar -- "kilo-" for a thousand, "milli-" for one-thousandth, "micro-" for one millionth, and so on.  This, in fact, is the reason this comes up; we've plunged so deep into the realms of the very large and the very small that the previous ones have proven insufficient, so they've invented four new ones and tacked them onto the outside of the scale.

The funny thing is, even these won't cover all contingencies.  When you get to galactic masses, you're talking about something that would require scientific notation even if you measured it in quettagrams.  And in the realm of the very small, when you get down to where physicists believe even such quantities as length and time are quantized (made up of chunks that can't be subdivided any further), you're still in the negative exponent range.  These Planck units of length and time are, respectively, 1.6x10^-35 meters (1.6x10^-5 quectometers) and 5.4x10^-44 seconds (5.4x10^-14 quectoseconds).

So we're still not out of the woods.  But I don't mind, because "quectosecond" is fun to say.

I'm not sure if this does anything to help the original problem -- that our brains can't really handle very big and very small numbers.  Anything more than a couple of orders of magnitude outside of what we deal with every day, and we boggle.  Which is why I think, science geek that I am, that I'm going to stick with my friend's favorite large unit of mass, which is the "metric shit tonne."

At least I have a pretty good idea of what that means.