Once again I'm sick at heart because of the news of a mass shooting, this time at a prominent LGBTQ+ club in Colorado Springs called Club Q.  At the time of this writing, five people are dead and another twenty-five wounded.  The suspected shooter, Anderson Aldrich, was subdued by two people at the club and is now in custody, currently being treated for minor injuries.

There's a lot to unpack, here.  How Aldrich got a gun, despite a previous arrest for a bomb threat.  Where he picked up the hateful and homophobic ideology that impelled him to do such a thing.  It was just revealed that he's the grandson of California Assemblyman and staunch MAGA Republican Randy Voepel, but whether that will turn out to be relevant to Aldrich's horrific act of violence remains to be seen.

The queer community is, understandably, reeling.  Colorado Springs is soundly conservative, and Club Q was one of the only safe havens they had there.  Social media this morning has been full of tearful, terrified individuals who have once again been reminded of how vulnerable they are, and how much unreasoning and vicious hatred still exists in this country. 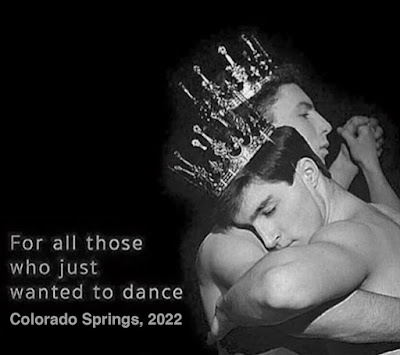 My horror started turning to anger, though, when I saw the tweet yesterday morning from Representative Lauren Boebert, whose district includes Colorado Springs.  "This morning the victims & their families are in my prayers," she wrote.  "This lawless violence needs to end and end quickly."

With all due respect, Representative Boebert, you can take your thoughts and prayers and shove them up your ass.

Boebert has been a strident voice in the anti-LGBTQ+ right wing, accusing the left of "grooming children" for such actions as pressing educators to honor trans youths' pronouns and including LGBTQ+ representation in school library books.  She warned drag queens to "stay away from Colorado's Third District."  Oh, but when her own hateful ideology comes back to her own district in the form of violence, she wants to -- as AOC succinctly put it -- "thoughts-and-prayers her way out of" any responsibility for what happened.

There's a line from the Bible that covers this kind of thing.  It's Hosea 8:7.  "Who sows the wind, reaps the whirlwind."

Neither I, nor any of the other members of the queer community whom I've spoken with, wants anything to do with the thoughts and prayers of people who after today will go back to doing everything they can to harm us.  No, not just harm us; eradicate us, erase every last one of us from the face of the Earth.

Think I'm exaggerating?  Consider monsters like Pastor Dillon Awes of the Steadfast Baptist Church in Watauga, Texas, who a couple of months ago told a cheering congregation that gay people should be lined up against a wall and shot in the head.  Or Pastor Joe Cammilleri, who saw a boy wearing fingernail polish and said to his congregation, "Oh, I just want to break his fingers."  Or far-right commentator Matt Walsh, who has built his career fighting against trans people's right to be who they are, and just last week crowed about once again being allowed to be as horrible as he wants to on Twitter now that Elon Musk has taken over: "We have made huge strides against the trans agenda.  In just a year we’ve recovered many years worth of ground conservatives had previously surrendered.  The liberation of Twitter couldn’t have come at a more opportune time.  Now we can ramp up our efforts even more."

Anyone in public office who honestly wants to stem the tide of violence against queer people can start by speaking out against these ugly spewers of hatred.  Until such time as Representative Boebert and the others like her will stand up and say to them, "This is morally indefensible.  LGBTQ+ people are deserving of the same rights and protections as anyone else.  No one gets to threaten the life, safety, and happiness of any other human being.  Not on my watch," they can sit down and shut the fuck up.

Actions like that of Anderson Aldrich are meant to terrify.  And yes, I've heard a lot of fear in the people I've talked to and those whose posts on social media I've seen this morning.  But not a single one of them has said, "So I'm just going to go back into hiding."  Queer people know all about the devastating effects of shame and fear; it's what kept me in the closet, literally for decades.  Whatever happens, we're not going back there.

Silence validates hatred.  Acquiescence perpetuates the feeling of being less worthy, less valued, less human.  Once we've mourned the victims of the shooting, innocent people who were just there to dance and laugh and socialize and have fun, we will redouble our efforts to make sure nothing like this ever happens again, and you can bet we will fly the rainbow flag more proudly than ever.

You homophobes think we can be bullied and threatened back into silence?  You ain't seen nothin' yet.  Gives a different twist to the line from the Book of Hosea, doesn't it?

Who sows the wind, reaps the whirlwind.