The creation of Loab

Just yesterday I ran into a new internet phenomenon that had me literally shouting at my computer screen, "Will all you people just calm down for a moment?"

What started me yelling at inanimate objects was a story about -- I shit you not -- an "AI-generated demon that is now haunting the internet."  The claim is that an AI art generator -- a program that can produce art based upon various prompts -- had unexpectedly produced a horrifying image of a woman with sunken cheeks and decaying eyes, and that image somehow "became real" and is now showing up all over the place.

The first part is actually true.  A woman named Steph Swanson, of Uppsala, Sweden, who goes by the online handle "Supercomposite," was working with something called a "negative weight prompt."  A negative weight prompt is an AI command to create an image that is as different from the prompt as possible.  So when Swanson was messing around with this idea, she put in a negative weight prompt using "Marlon Brando" as the input.  The result looked like a business logo.

Which is, honestly, pretty different from a photograph of Marlon Brando.

When it got interesting was when she took the business logo image and used it as the input for a negative weight prompt.  In a completely logical world, what you'd expect to get is Marlon Brando.

What she got was this. 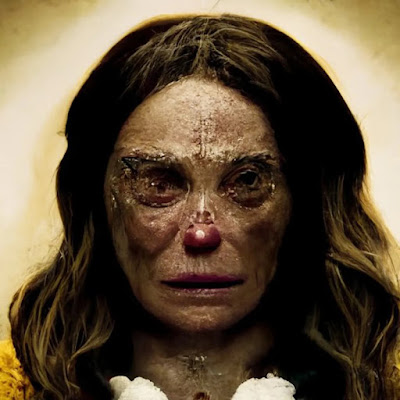 Now, up front, I must admit this image is creepy as fuck.  Swanson herself was pretty shocked, and tried it again -- and kept coming up with similar horrifying images.  One of them had some scrawled writing on it -- "LOAB" -- so the woman in the image started being referred to by that name.
Rationally, it's not all that weird that what came out wasn't a picture of Brando.  It's analogous to what happens with internet translators; they're notorious for failing this kind of input reversal test.  Two possibly apocryphal examples are pretty well known.  The first is when someone put "Out of sight, out of mind" into a translator, sent the output into a second translator to return it to English, and what came out was "invisible insanity."  Even funnier is when they used "The spirit is willing, but the flesh is weak" and got back "the liquor is good but the meat is rotten."
What's going on here, though, is considerably more subtle than simple connotation misunderstandings in an online translator, and even people who understand AI programs (I am very definitely not one of those people) haven't really been able to explain why -(-(Marlon Brando)) gives you the hideous, corpse-like visage of Loab.
But if you know anything about urban legends, conspiracy theories, and so on, you will certainly be able to predict what happened next.
A bunch of people decided that Loab is an actual demon who was haunting the internet, and after Swanson accidentally activated her, she's been popping out in all sorts of unexpected places.  (Loab, not Swanson.)  There's already a mythos growing around her (once again, Loab, not Swanson), with some people eagerly trying to find ways to chat with her and others screeching that she's eeeeeee-villl and wants to destroy your eternal soul.  Some folks are saying Loab is an egregore -- a creature that went from imaginary to real because of the collective "thought energy" of the ones who believe in her, so all those folks messing around with AI generators of various kinds need to stop right now before they create something really really bad and destroy the whole universe.
That was the point when I started yelling at my computer.

I mean, really.  I know there are a lot of superstitious people out there, and magical thinking is still all too common, but haven't we progressed as a society past the point where any sane adult thinks stepping on a crack in the sidewalk really will break your mother's back?  Because that's all this is, with the added trappings of computers and AI.

I'm as curious as the next layperson as to why the algorithm brought up Loab's gruesome face; but I'd be willing to bet a significant amount of money that when the experts study this, they will not find out that it's because there's a real evil demon woman haunting our computers.

On the other hand, if the next time I open my laptop, my desktop background has been changed to an image of a hideous corpse-lady, I'll have to admit I was mistaken.

Assuming I don't scream like a little child and then have a stroke, which is honestly more likely.