The highlight of my trip to Iceland this past August was seeing the newly-erupting volcano of Fagradalsfjall, southwest of the capital city of Reykjavík.

Fagradalsfjall is Icelandic for "mountain of the beautiful valley."  I'm not sure I'd use the word "beautiful," which to me carries connotations of "benevolent."  When we were there, you could feel the eruption before you heard or saw it; the entire floor of the valley was vibrating, a subsonic rumble that I felt in my gut.  Then you hear the roar, a guttural, low-pitched thunderous booming.  Then you smell it -- the characteristic sulfurous, rotten-egg smell of an active volcano.  Then you crest the top of a low hill, and see it for the first time. 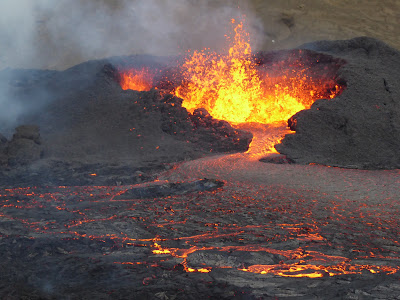 We were close enough that we could feel the warmth radiated from the lava.  Much closer, and the combination of the heat and the sulfur gases would have been overwhelming.  Orange-hot plumes of molten rock exploded out of the fissure and splattered onto the sides of the cinder cone, almost instantly turning to shattered, jagged chunks of black basalt as it cooled and hardened.

It was one of the most spectacular things I've ever witnessed.  In the presence of this kind of power, you truly feel tiny and very, very fragile.

We were really extraordinarily lucky to see what we did; we were there on the 15th of August, and -- for reasons unknown -- the eruption abruptly ceased on the 21st.  Fagradalsfjall is still very much an active volcano, though.  Just last week it started up again, and this cycle looks like it may actually be even more dramatic.

What brings all this up is a paper last week in Nature about some research out of the University of California - Santa Barbara that analyzed the lava from Fagradalsfjall and found that it ran counter to the conventional model of how volcanoes erupt.  The previous understanding was that magma chambers fill gradually, and undergo mixing from convection and the physical shaking from earthquakes; then, when the eruption happens, the chamber drains.  This would result in a relatively uniform chemistry of the rock produced from the beginning of the eruption to the end.

That's not what geologists saw with Fagradalsfjall.

"This is what we see at Mount Kilauea, in Hawaii," said Matthew Jackson, who co-authored the study.  "You'll have eruptions that go on for years, and there will be minor changes over time.  But in Iceland, there was more than a factor of 1,000 higher rates of change for key chemical indicators.  In a month, the Fagradalsfjall eruption showed more compositional variability than the Kilauea eruptions showed in decades.  The total range of chemical compositions that were sampled at this eruption over the course of the first month span the entire range that has ever erupted in southwest Iceland in the last 10,000 years."
Why this happened is uncertain.  It could be that Fagradalsfjall is being fed by blobs of liquid magma rising from much deeper in the mantle, where the chemistry is different; those much hotter blobs then rose to the surface without a lot of mixing, resulting in a dramatic alteration of the rock being produced over the course of the eruption.  This adds a significant complication to interpreting records of past eruptions, not only in Iceland, but with other volcanoes.
"So when I go out to sample an old lava flow, or when I read or write papers in the future," Jackson said, "it'll always be on my mind: This might not be the complete story of the eruption."
It's fascinating that as far as science has come, we still have a lot to work out -- not only out in the far depths of space (as yesterday's post about MoND described) but right beneath our feet on our own home world.  As eminent astrophysicist Neil de Grasse Tyson put it, "You can’t be a scientist if you’re uncomfortable with ignorance, because scientists live at the boundary between what is known and unknown in the cosmos.  This is very different from the way journalists portray us.  So many articles begin, "Scientists now have to go back to the drawing board."  It’s as though we’re sitting in our offices, feet up on our desks—masters of the universe—and suddenly say, "Oops, somebody discovered something!"  No.  We’re always at the drawing board.  If you’re not at the drawing board, you’re not making discoveries."
****************************************