I find it utterly baffling how hard it is for people to look at something that didn't work out like they expected and say, "Well, I guess I was wrong, then."
I mean, on one level, I get it.  I'm no fonder of being wrong than the next guy.  Finding out you're mistaken, especially about something important, can be devastating.  And admitting you're wrong can be nothing short of humiliating.  But even so -- when the facts demand it, we don't really have a choice, do we?
To judge by a great many people, apparently we do, and that choice is "hang on like grim death to what we already believed, and summarily dismiss any evidence to the contrary."
Take, for example, last week's election here in the United States.  Many of us, on both sides of the aisle, were expecting a "red wave" -- that the Republicans would score resounding wins, and end up with decisive majorities in the House, Senate, and gubernatorial races.  Didn't quite work out that way.  The Democratic majority in the Senate looks like it'll be up by at least one, possibly two; at the time of this writing, the control of the House of Representatives has yet to be decided, but any majority (either way) is going to be razor-thin.
My reason for bringing this up in the context of "being wrong" is not the pollsters, nor mere voting citizens like myself.  I have nowhere near the expertise in political science to expect my prognostications about elections would carry any weight at all, and polls have been wrong as often as they're right.  No, what I'm looking at here are the people who predicted the "red wave" would happen -- because God had told them so personally.
Let's start with pastor George Pearsons, who told an interviewer on The Victory Channel that he knew the election wouldn't be "stolen" because he'd gotten the information directly from the Big Guy himself:

This afternoon I'm in the kitchen, and I'm fixing something to eat, and Terry and I are talking about the election, and the different things that are happening.  And for a moment I got quiet, and I heard the voice of the Lord.  And you know what he said?  He said, 'I got this.'...  Father, we thank you.  We have worked together between heaven and Earth.  Two years, praying, standing, believing,  We are, as believers, emboldened, empowered, and standing on our authority in the word of God.  This election will not be stolen.  Corruption, you bow your knee, your name to the name of Jesus [??? sic], and Father we thank you that we've seen in two years, Jesus himself has rolled up his sleeves, and he has worked, and his people have worked with him, in every shape, form, and manner.  So Lord, we thank you that this deal is over.  It's up.  And now we hear your voice: 'I got this.'  And we praise you and honor you for the victory this night for the United States of America.

As the results started coming in, though, the tune changed.  My Pillow guy Mike Lindell, also speaking on The Victory Channel, said he saw it coming, despite what God himself had said to Reverend Pearsons, and that had been announced on the same channel, only hours earlier:

Well, it's kind of what I expected.  They're stealing everything.  Just in Herschel Walker's race alone, over two hundred thousand votes have been injected into his opponent to get to this runoff stage.  They stole the governor's race with Mastriano in Pennsylvania, we've seen an early injection of ninety thousand votes in the computers, and Kari Lake, they're trying to steal her race, too.

Needless to say, there was no "injection" of votes, and the races weren't "stolen."  Walker's in a runoff but is trailing Raphael Warnock, and Mastriano lost fair and square.  But saying that is a bridge too far for people like Lindell.
A couple of days afterward, when it became clear that there had been no "red wave," the christofascists were scrambling around trying to figure out why the divine guidance had turned out to be flat wrong.  No way could they just say, "Maybe God didn't speak to us after all," or "Perhaps hitching our boat to Donald Trump wasn't such a great idea," or (worst of all) "It's time to do some reflection and rethink whether our message of exclusion, ugliness, and hate is in line with Jesus's actual words."  Instead, they cast around for what could possibly have made the election go sideways, and landed on the obvious answer:
It was the demons. 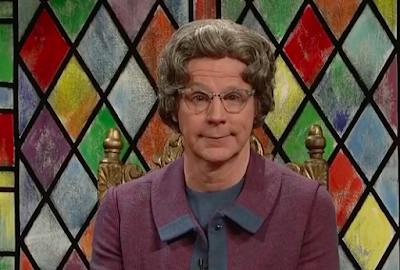 Pastor Shane Vaughn said that of course what God told him wasn't wrong, and of course he wasn't delusional when he claimed to hear God speaking in the first place.  It was just those damn demons:

That's why there was no red wave.  Abortion.  Abortion changed everything.  And even though all the polls showed the economy was the main issue, abortion is a religious issue.  And religion creates more passion than anything in the world...  And there's a religion of demons that loves abortion.  That religion of pro-abortion showed up.  It was bigger than anybody understood because of the passion those demonic powers create in their church of heathens that love to kill babies.  Now that's why there was no red wave.  Abortion.  Had it not been for the abortion issue, I promise you, the whole country would be red today.  What happened in Pennsylvania -- anybody who could vote for that monster, Uncle Fester, proves to me the power of demonic activity in the world today.  That's the only way you could vote for that man.  That's it.  Those demons did show up, and those demons do have power over this Earth.

So if the supernatural voice you supposedly heard telling you something turns out to be wrong, you have to invent a supernatural enemy to explain what happened?
I understand the sunk-cost fallacy; that once you've put a tremendous amount of personal and emotional energy into supporting something or someone, it's a huge effort to reverse course.  But seriously; isn't it time for some reassessment, here?
It puts me in mind of a couple of quotes, the first from Susan B. Anthony: "I distrust those people who know so well what God wants them to do, because I notice it always coincides with their own desires."  And even more to the point, from theologian and writer Timothy Keller: "If your god never disagrees with you, you might just be worshiping an idealized version of yourself."
****************************************