The injection of AI technology into art has opened up a serious can of worms.

I ran into two examples of this in rapid succession a couple of days ago.  The first came to me by way of a friend who is an artist and writer, and is about the Lensa app -- a wildly-popular AI art interface that can take an image of your face, spruce it up a bit (if it needs it -- mine certainly would), and then create digital art of you as a superhero, model, mythological creature, Renaissance painting, or dozens of other reimaginings of you.  Someone I follow on TikTok posted a sequence of Lensa art based on his face -- and I have to say, they were pretty damn cool-looking.

The hitch is where all the imagery Lensa is using comes from.  There are credible allegations that the owners of the app are basically shrugging their shoulders at the question.  Artist Rueben Medina had the following to say about it:

I hate being a party pooper but please stop using Lensa and posting your AI art images from it.  I understand if you don't care about the blatant theft of your data the app is doing, lots of things do that.  What you should care about is this:

The Lensa app uses the Stable Diffusion model to create those AI images.  That model is trained on the Laion database.  That database is full of stolen artwork and sensitive images.  Using Lensa hurts illustrators/photographers in two major ways:

1. This database was built without consent nor compensation.  That means the work is stolen.

2. The proliferation of cheap AI art is culturally devaluing the work of illustrators which is already at rock bottom.

Is there an ethical way to create AI art?  Absolutely.  Databases built on images that artists have opted into and are being compensated for is the first step.  Pretty much none of these AI art apps do that because it would make their business model (Lensa wants $40/yr) unprofitable.

This one hits hard for me because my wife is an artist who shows all over the Northeast, and it has become increasingly difficult for her to sell her pieces at a price that fairly compensates her for her time, skill, and talent -- in part because it's so easy to get mass-produced digital art that gives the impression of high quality at a far lower price.  Carol's work is stunningly original -- you seriously should check out her website -- and while she still has very successful shows, the game is a lot harder than it used to be.

Part of the problem is how good the AI has gotten.  And it's not just visual art that is under attack.  Right after I ran into the Lensa sequence on TikTok and saw Rueben Medina's impassioned plea not to use it, I stumbled across a paper in the journal Computers in Human Behavior describing an AI program that can produce haiku, a stylized seventeen-syllable form originating in Japan that often deals with finding beauty in nature, and evokes the emotions of serenity, peace, wistfulness, and nostalgia.

It is both fascinating and disquieting that the software produced haiku so authentic-sounding that a panel of readers couldn't tell them apart from ones written by humans.

"It was interesting that the evaluators found it challenging to distinguish between the haiku penned by humans and those generated by AI," said Yoshiyuki Ueda, who co-authored the paper, in an interview with Science Daily.  "Our results suggest that the ability of AI in the field of haiku creation has taken a leap forward, entering the realm of collaborating with humans to produce more creative works. Realizing [this] will lead people to re-evaluate their appreciation of AI art."
Yes, but. 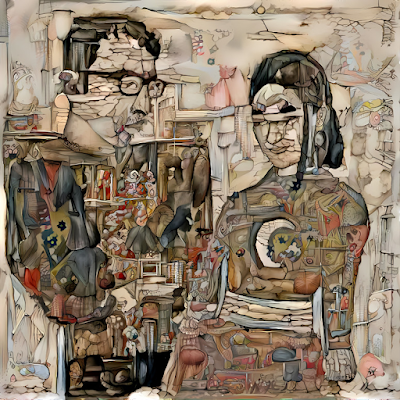 [Image licensed under the Creative Commons Damian Putica, A.I Generated Artwork of a teenage boy and teenage girl, CC BY-SA 4.0]
I am very much of the opinion that the perception of beauty in any art form -- be it visual arts, writing, music, dance, theater, or anything else -- occurs because of the establishment of a link between the producer of the art and the consumer.  (I dealt with this a while back, in a post called "The Creative Relationship," about our unstoppable tendency to read our own experience into what we see and hear.)  But what happens when one side of that relationship is a piece of software?  Does that matter?  As a writer, I find this a troubling prospect, to say the least.  I know we're not nearly there yet; haiku is a simple, highly rule-based form, which novels are clearly not.  (I don't mean haiku is simple to do well, just that the rules governing the form are simple.)  Having an AI write a creditable haiku is bound to be a lot easier than having it write a novel.  But as we've seen so many times before, once we have proof of concept, the rest is just tinkering; the software tends to improve really quickly once it's shown that the capability is there.
As a novelist, I would have a serious concern about being superseded by a story-generating computer that could create novels as well as I can.
The whole thing raises questions not only about the ethics of using human creators' work as a springboard for AI-based mass production, but about what exactly creativity means, and whether it matters who -- or what -- is doing the creating.  I don't have any easy answers; my emotional reaction against the possibility of what my wife and I both do being supplanted by computer-generated content may not mean very much.
But I think all of us -- both creators and consumers -- better think long and hard about these issues, and soon.
****************************************