Although you don't tend to hear much about it, the Ordovician Period was a very peculiar time in Earth's history.

From beginning (485 million years ago) to the end (444 million years ago) it experienced one of the biggest global climatic swings the Earth has ever seen.  In the early Ordovician the climate was a sauna -- an intense greenhouse effect caused the highest temperatures the Paleozoic Era would see, and glacial ice all but vanished.  By the end, the center of the supercontinent of Gondwana was near the South Pole, and glaciers covered much of what is now Africa and South America, resulting in a massive extinction that wiped out an estimated sixty percent of life on Earth.

At this point, life was confined to the oceans.  The first terrestrial plants and fungi wouldn't evolve until something like twenty million years after the beginning of the next period, the Silurian, and land animals only followed after that.  So during the Ordovician, the shift in sea level had an enormous impact -- as the period progressed and more and more ocean water became locked up in the form of on-land glacial ice, much of what had been shallow, temperate seas dried up to form cold, barren deserts.

But during the beginning of the period, life thrived in the warm oceans, giving rise to huge ecosystems based on reef-building corals and sponges.  Just as today, back then coral reefs provided habitats to a tremendously diverse community, and fossil beds like the Fezouata Formation of Morocco give us a glimpse of a strange and wonderful world.

Here's one of the exceptionally well-preserved fossils from Fezouata, a marrellomorph arthropod called Furca mauritanica: 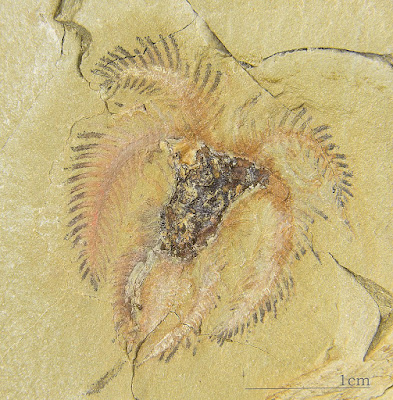 And here's a reconstruction of another one from the same group, the bizarre Mimetaster hexagonalis (the genus name means "mimics a starfish"): 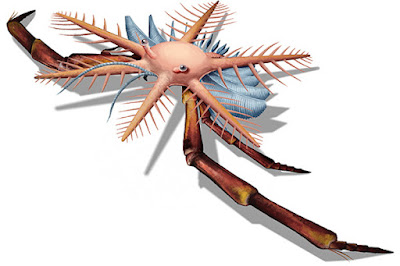 These arthropods, more closely related to trilobites than to any living species, were one of the dominant groups during the temperate early Ordovician, but had vanished almost entirely during the icehouse conditions of the end of the period.

The reason this comes up is because of a paper out of the University of Exeter about further research into the fossils of the Fezouata Formation.  And this study has turned up something phenomenal -- another kind of marrellomorph arthropod related to Furca and Mimetaster that was something on the order of two meters long.

That is one big swimming bug.

I found this a little surprising, above and beyond simply being shocking because it's enormous.  As far as I understand physical chemistry, I would think that the greenhouse conditions of the early Ordovician implied two things: (1) higher carbon dioxide and lower oxygen levels, both in the atmosphere and the oceans; and (2) the warmer temperatures making what oxygen there was less soluble in water.  Both of these would lead to more hypoxic conditions, and -- again, as far as my layperson's understanding goes -- should result in generally smaller body size, especially in arthropods.

Arthropods have a couple of limitations that keep cockroaches from getting big as elephants (despite what you might have seen in any number of bad 1950s horror movies).  First, they aren't built to support a large body mass; a terrestrial insect expanded to enormous size, with its bodily proportions left intact, wouldn't be able to stand up, much less move.  This disadvantage is somewhat offset by living in the water, where buoyancy supports the body's mass.  (Note how much bigger oceanic mammals can get than terrestrial ones do.)

Second, and more apposite to this discussion, arthropods are limited by their rather shoddy respiratory systems.  They don't circulate oxygen using their blood, as we do; oxygen is absorbed passively, through channels called tracheal tubes (in terrestrial arthropods) and feathery gills (in aquatic ones).  Gills do have an edge, efficiency-wise, over tracheal tubes, but are working against water's much lower oxygen concentration (way less than one percent, as compared to air at sea level, which averages around twenty-one percent).  This is why terrestrial animals drown; their lungs are just not efficient enough to extract oxygen from a fluid that has so little of it.

And, as I said before, the likelihood is that the conditions of the early Ordovician would likely have combined to cause a far lower dissolved concentration in the oceans than we have now.

So how did marrellomorphs get so big?

At the moment, we don't know.  But the new study has shown that the early Ordovician seas were even weirder than we'd thought, with arthropods swimming around as long as a fully-grown human is tall.

No idea what those things ate, but if I ever get in a time machine and go back then, I'm sure as hell going to be careful if I go swimming.