New jaws in an old bird

One difficulty in building evolutionary trees of life from fossil evidence is the fact that "simpler" doesn't necessarily mean "older."

It's an understandable enough mistake.  Taken as a whole, from life's first appearance some 3.7 billion years ago until today, there has been an overall increase in complexity.  The problem occurs when you try to apply that overarching trend to individual lineages -- and find that over time, some species have actually become less complex.

A good example is Subphylum Tunicata, less formally known as tunicates or sea squirts.  At a glance, tunicates look a little like sponges (to which they are only very distantly related); simple, sessile filter feeders.  It was only when biologists discovered their larvae that they realized the truth.  Tunicates are much more closely related to vertebrates than they are to simple invertebrates like the sponges and corals they superficially resemble.  The larvae look a bit like tadpoles, but as they develop the sequentially lose structures like the notochord (the flexible rod that supports the dorsal nerve cord; in us, it ends up becoming the discs between our vertebral bones), most of the muscle blocks, and in fact, just about all their internal organs except the ones involved in processing food and reproducing.

As evolutionary biologist Richard Dawkins put it, evolution is "the law of whatever works."  It doesn't always lead to becoming bigger, stronger, faster, and smarter.  If being small, weak, slow, and dumb works well enough to allow a species to have more surviving offspring -- well, they'll do just fine.

The reason this topic comes up is because of a paper in Nature about a re-analysis of a bird fossil found in a Belgian quarry two decades ago.  The comprehensive study found that one of the bones had been misidentified as a shoulder bone, but was actually the pterygoid bone -- part of the bony palate.  And that bone showed that the species it came from, a heron-sized toothed bird Janavis finalidens, had been misplaced on the avian family tree.

And that single rearrangement might restructure the entire genealogy of birds. 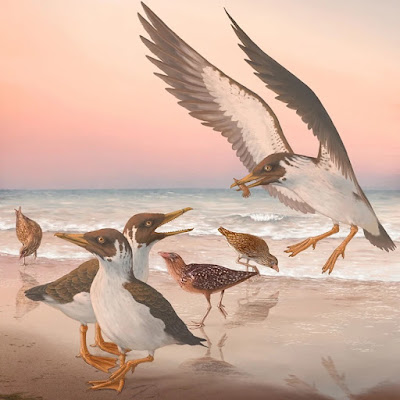 There are two big groups of modern birds; neognaths, which have jaws with free plates allowing the bills to move independently of the skull, and paleognaths, whose jaw bones are fused to the skull.  The paleognaths -- including emus, cassowaries, tinamous, and kiwis -- were thought to be "primitive" in the sense of "more like the ancestral species."  (If you know some Greek, you might have figured this out from the names; paleognath means "old jaw" and neognath means "new jaw.")

But the new analysis of Janavis, a species dating to 67 million years ago -- right before the Chicxulub Meteorite hit and ended the Cretaceous Period and the reign of the dinosaurs -- shows that it was a neognath, at a time prior to the split between the two groups.

Meaning the neognaths might actually have the older body plan.

If this is true -- if the paleognaths evolved from the neognaths, not the other way around -- the puzzle is why.  The flexible beaks of neognaths seems to be better tools than the fused jaws of the paleognaths.  This, though, brings us back to our original point, which is that evolution doesn't necessarily drive species toward complexity.  It also highlights the fact that if a structure works well enough not to provide an actual survival or reproductive disadvantage, it won't be actively selected against.  A good example, all too familiar to the males in the audience, is the structure of the male reproductive organs -- with the urethra passing through the prostate gland (leading to unfortunate results for many of us as we age), and the testicles outside the abdominal cavity, right at the perfect height to sustain an impact from a knee, the corner of a table, or the head of a large and enthusiastic dog.  (If this latter example seems oddly specific, I can assure you there's a galumphing galoot of a pit bull currently asleep on my couch who is the reason it came to mind.)

Anyhow, it looks like we might have to rethink the whole "paleognath" and "neognath" thing.  Makes you wonder what else on the family tree of life might need some jiggering.