I've always been in awe of cryptographers.

I've read a bit about the work British computer scientist and mathematician Alan Turing did during World War II regarding breaking the "unbreakable" Enigma code used by the Germans -- a code that relied on a machine whose settings were changed daily.  And while I can follow a description of how Turing and his colleagues did what they did, I can't in my wildest dreams imagine I could do anything like that myself.

I had the same sense of awe when I read Margalit Fox's fantastic book The Riddle of the Labyrinth, which was about the work of linguists Alice Kober and Michael Ventris in successfully translating the Linear B script of Crete -- a writing system for which not only did they not initially know what the symbol-to-sound correspondence was, they didn't know if the symbols represented single sounds, syllables, or entire words -- nor what language the script represented!  (Turned out it was Mycenaean Greek.)

I don't know about you, but I'm nowhere near smart enough to do something like that.

Despite my sense that such endeavors are way outside of my wheelhouse, I've always been fascinated by people who do undertake such tasks.  Which is why I was so interested in a link a friend of mine sent me about the breaking of a code that had stumped cryptographers for centuries -- the one used by King Charles V of Spain back in the sixteenth century. 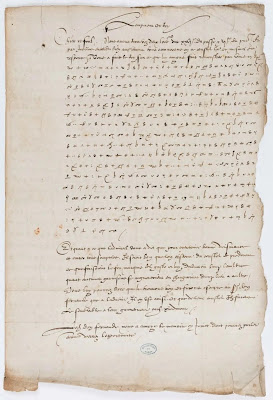 Charles was a bit paranoid, so his creation of a hitherto unbreakable code is definitely in character.  When the letter was written, in 1547, he was in a weak position -- he'd signed the Treaty of Crépy tentatively ending aggression with the French, but his ally King Henry VIII of England had just died and was succeeded by his son, the sickly King Edward VI.  Charles felt vulnerable...
... and in fact, when the letter was finally decrypted, it was found that it was about his fears of an assassination plot.
As it turned out, the fears were unfounded, and he went on to rule Spain and the Holy Roman Empire for another eleven years, finally dying of malaria at age 58.

His code remained unbroken until recently, however.  But the team of Cécile Pierrot-Inria and Camille Desenclos finally was able to decipher it, thanks to a lucky find -- another letter between Charles and his ambassador to France, Jean de St. Mauris, which had a partial key scribbled in the margin.  That hint included the vital information that nine of the symbols were meaningless, only thrown in to make it more difficult to break.  (Which worked.) 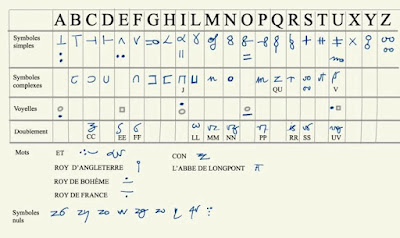 Even with the partial solution in hand, it was still a massive task.  As you can see from their solution, most of the consonants can be represented by two different symbols, and double letters are represented by yet another different (single) symbol.  There are single symbols that stand for specific people.

But even with those difficulties, Pierrot-Inria and Desenclos managed to break the code.

All of this gives hope to linguists and cryptographers working on the remaining (long) list of writing systems that haven't been deciphered yet.  (Wikipedia has a list of scripts that are still not translated -- take a look, you'll be amazed at how many there are.)  I'm glad there are people still working on these puzzles.  Even if I don't have the brainpower to contribute to the effort, I'm in awe that there are researchers who are allowing us to read writing systems that before were a closed book.