Ever heard of gomphotheres?

They're a group of prehistoric megafauna related to modern elephants with some pretty wacky-looking dental adornments.  There was Cuvieronius: 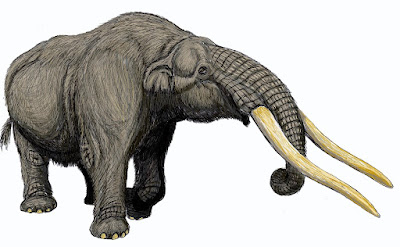 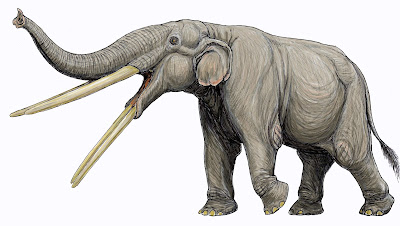 And strangest of all, Platybelodon: 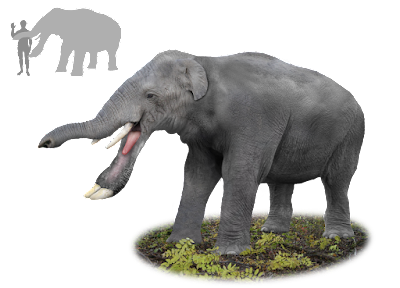 Illustrating that it's a good thing I'm not in charge of assigning scientific names, because I'd'a named this one Derpodon bucktoothii.

In any case, these behemoths were once widespread across North America and Europe, but gradually died out during the Pliocene Epoch (5.3 to 2.6 million years ago), with the last species persisting a little way into the next epoch, the Pleistocene.  Probably for the best, actually.  I have a hard time keeping rabbits and woodchucks out of my vegetable garden, I'd just give up if I had to fend off these things as well.

Where it gets even more interesting is that these animals, like (literally) millions of others, had coevolved with other life forms.  Coevolution -- when the adaptations of one species effect the adaptations of an unrelated species -- can take two forms.  First, there's an evolutionary arms race, where a predator/prey relationship pushes both species to evolve (such as cheetahs and antelopes, where the fastest cheetahs catch the slowest antelopes, selecting both for greater speed).  The other is mutualism, where each of the two helps the other, like flowers that have adapted to specific pollinators, sometimes resulting in such dependence that neither species can survive without the other.

It's this latter type that happened with the gomphotheres.  They were major seed dispersers -- eating fruits of trees and shrubs, then defecating out the seeds (unscathed) after digesting the pulp.  Many of these plants still exist in North America and Europe, and all are united by having large, tough-skinned fruits, usually with hard or unpalatable seeds, and some sort of thorns or spikes on the branches to deter smaller animals from eating them.

There's only one problem -- as I mentioned earlier, all the gomphotheres have been extinct for millions of years.

So that leaves a bunch of plants without an efficient way of dispersing their seeds.  And we're not talking about exotic and unfamiliar plants, here.  If you look up evolutionary anachronisms, you'll see lots of names you recognize, including:

Some of these, like cacao, Osage orange, and Kentucky coffee tree, have only prospered and/or expanded their range because humans intervened.  The last-mentioned, for example, was found only in a highly fragmented, restricted range in the south central United States when it was first cultivated by botanists and found to be a decent ornamental tree.  In the wild, the big, leathery pods -- like the fruit of a lot of these species -- simply fall to the ground when ripe and rot, the seeds nearly all failing to germinate.  Now it's planted throughout the eastern half of the United States, although given its poor germination rate even with help, the species will probably never be common.

Unless the elephants come back somehow.

This all illustrates a point I've made before -- the biosphere is a complex interwoven tapestry.  While change is inevitable -- and the extinction of the gomphotheres isn't the fault of humanity but (likely) the changing climate -- it behooves us to keep in mind that nothing on the Earth exists in isolation.  You can't pull out one thread without making the entire thing start to come unraveled.  And too many threads pulled out, the entire tapestry falls apart.

I can only hope we learn from what we've found out about the ebbs and flows of prehistory.  While we can't halt change, we need to do a far better job of protecting what we have.

Lest we go the way of the gomphotheres.