A lens into the past

The third of C. S. Lewis's Space Trilogy, That Hideous Strength, is not without its serious flaws (itself an interesting topic and perhaps something I'll look at another time), but is a riveting adventure story even so, with twists, turns, near misses, and a finale where (literally) the world of the story comes crashing down on the characters.

Central to the tale is the famous character of Merlin, the master magician from the Arthurian legends, who has been in a charmèd sleep after his dalliance with the sorceress Nimué (also known as Ninienne or Vivienne, depending on which version you read).  Lewis's story, set in immediately post-World-War-II Britain, involves two different groups, one good and one deeply evil, who are both trying to reawaken Merlin and harness his powers for their own purposes.  They both have figured out that the sorcerer's not-so-final resting place is a souterrain, or underground chamber, beside a well on the grounds of the (fictitious) Bracton College, and each is racing to get there first.

Lewis's placement of the venerable Merlin in a souterrain is justified; Iron Age Celtic settlements were riddled with them.  Their purpose is unknown.  They may have been used for storage, for ritual purposes, as a hiding place when they were attacked (all too common in that violent time), all three, or perhaps something else entirely.  Excavating souterrains is understandably fascinating to archaeologists, who hope to learn something of the history of the ancient Britons, who left virtually no written records (and very few surviving artifacts of any kind).

It's also backbreaking and dangerous work.  In the intervening centuries, cave-ins and erosion from groundwater have choked most souterrains with debris that has to be cautiously excavated and removed (hopefully not triggering further ceiling collapse in the process).  So people interested in the history of the Celts -- and other cultures who tunneled under their settlements -- will be excited to find out that a team from London-based AOC Archaeology has figured out a way to see into some Scottish souterrains -- without anyone going inside.

Using a Leica BLK360 laser scanner, they were able to create a 3-D computerized image of Cracknie souterrain, in Borgie Forest (north-central Scotland), a curving tunnel which is thirteen meters long and was built around two thousand years ago.

"Souterrains are still an enigma," said Matt Ritchie, resident archaeologist at Forestry and Land Scotland, who contributed to the project.  "Perhaps they were for storage, such as grain in sealed pots or dairy products like cheese.  Perhaps they were for security, keeping valuables safe, or slaves or hostages secure.  Or perhaps they were for ceremonial purposes, for household rituals, like a medieval shrine or private chapel...  [Cracknie souterrain] is one of the most important scheduled monuments on Scotland's national forests and land...  To do the equivalent of what we did with a theodolite [a precision optical instrument often used to map out caves], you would be there a long time."
Here's the map the laser scanner created: 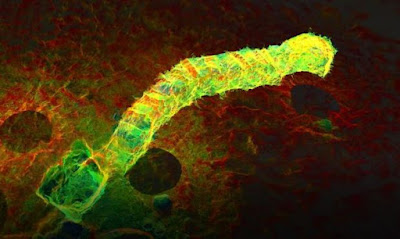 This is only the beginning, of course; once you have proof-of-concept, the technology is bound to improve.  Soon, it will likely be possible to get a detailed image of the interior of a rubble-choked cavern where humans haven't set foot for millennia -- without moving a single pebble.
I, for one, can't wait to see what they find.  I'm one-quarter of Scottish descent, and have always felt a particular fascination for the history, language, music, and culture of the Celts.  It would be amazing to have a laser-powered lens into their past -- and a better idea of how my distant ancestors lived thousands of years ago.
And if they do end up finding Merlin, I'm all for waking him up.  This world could use a good dose of Elder Magic.
****************************************