A twist in the fabric

All of us learned about gravity in elementary school, often starting with the anecdote about Isaac Newton seeing a falling apple and wondering why it was pulled toward the Earth.  What's weirdest about the phenomenon, though, is that while we can characterize gravitational force mathematically to just about any precision you want, explaining why it works is not nearly so easy.  Einstein, in his General Theory of Relativity, visualized it as a warping of space -- that anything with mass literally pulls on the spacetime fabric, in much the way that a heavy weight depresses the surface of a trampoline.  Picture rolling a small ball toward the weight on the trampoline; the ball will speed up, but it's not because the weight is somehow magically pulling on the ball.  It's because the ball is following the contours of a warped space.
Move that two-dimensional model up by one dimension, and you have an idea of how gravity operates.
Even Einstein, though, couldn't figure out how to make his gravitational model work in the realm of the very small.  Trying to unite the theory of gravity with the theories of quantum mechanics has, so far, proven impossible.  That combo -- called a "Grand Unified Theory" -- has defied the best minds in the field.  In fact, just last month an experiment in Italy failed to find predicted violations of Pauli's Exclusion Principle which would have supported some of the leading contenders for a unified model, most notably string theory.
So it's back to the drawing board.  And despite astrophysicist Neil deGrasse Tyson's statement that "scientists are always at the drawing board," this has got to be frustrating -- and raises question of whether a unified theory of gravity and quantum physics is even possible.
Meanwhile, a bit like the apocryphal bumblebee who by the principles of aerodynamics can't fly but doesn't know this so goes ahead and flies anyhow, gravity continues to warp space all around us even though we can't really explain it.  Just as well, because otherwise we'd obey Newton's First Law of Motion and go flying off the Earth at our current rate of speed in a direction tangent to its surface, until we encountered a fixed object, which in my case would be the wall of my house.
And out in space, gravity keeps twisting the fabric of spacetime, resulting in some pretty amazing structures.  In fact, this is why the topic comes up; just last week, there were two studies looking at the effects of extreme gravity on astronomical objects, both of which will make you glad we live here on a paltry little planet with a relatively small ability to warp space.
The first, out of the University of Washington, looked at the anomalous -- if beautiful -- shape of the Butterfly Nebula, the remnants of a star that exhausted its fuel and jettisoned the entire out of surface into a pair of mirror-image cones. 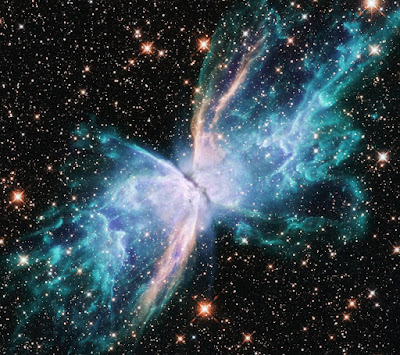 [Image is licensed under the Creative Commons Hubble ESA, NGC 6302 (50033189356), CC BY 2.0]
What apparently happened is that the star which blew up had a companion star, and the gravitational pull of that companion funneled the debris into the beautiful, gossamer "wings" the nebula shows today.  But even that hypothesis hasn't been enough to account for the nebula's odd shape.
"The Butterfly Nebula is extreme for the mass, speed and complexity of its ejections from its central star, whose temperature is more than two hundred times hotter than the Sun yet is just slightly larger than the Earth," said Bruce Balick, who led the team studying the nebula.  "I've been comparing Hubble images for years and I've never seen anything quite like it...  At this point, [all we have are] hypotheses.  What this shows us is that we don't fully understand the full range of shaping processes at work when planetary nebulae form.  The next step is to image the nebular center using the James Webb Space Telescope, since infrared light from the star can penetrate through the dust."
The second study, from NASA and the Goddard Space Flight Center, looked at a different way that a star can end its life.  It used data from the Hubble Space Telescope to look at a star in the galaxy ESO-583-G004, three hundred million light years away, and found evidence of a black hole that was in the process of swallowing a nearby star -- pulling it into a torus, or donut, shape.  It's unknown if the ill-fated star was already a companion to the black hole, or if it got gravitationally captured, but either way the outcome was the same.
I.e., not good.
The star was "tidally disrupted" -- for that, read "ripped to shreds" -- and the stellar material swung into an "accretion disk" as big as the Solar System.  "We saw this early enough that we could observe it at these very intense black hole accretion stages," said Peter Maksym, of the Harvard Center for Astrophysics, who co-authored the study.   "We saw the accretion rate drop as it turned to a trickle over time...  We're looking somewhere on the edge of that donut.  We're seeing a stellar wind from the black hole sweeping over the surface that's being projected towards us at speeds of twenty million miles per hour (three percent the speed of light).  We really are still getting our heads around the event.  You shred the star and then it's got this material that's making its way into the black hole.  And so you've got models where you think you know what is going on, and then you've got what you actually see.  This is an exciting place for scientists to be: right at the interface of the known and the unknown."
Right, in fact, at Tyson's "drawing board."
It's a thrilling time for scientists; so much is explained, but every question that's answered raises ten more questions.  The hydra-headed nature of science is just how it goes, though.  And even if some of the big questions do eventually get answered -- whether, for example, there's a quantum theory of gravity -- I don't think we'll be reaching the edges of what's knowable for a very long time.
****************************************