The woo-woo world is currently running about making excited little bleating noises because of a recent set of odd occurrences in Utah that are being widely labeled as "mysterious and unexplainable."

What's most amusing about this is that after calling them "unexplainable" they go ahead and explain them, although considering the content of some of the "explanations," using that word may be stretching the definition to the breaking point.  What's happened is that hikers in the foothills near Salt Lake City have stumbled across about a dozen antennas anchored to the ground, and at least a couple of them were connected to solar panels or locked battery boxes.  When local officials find the devices they remove them, but thus far no one has identified the person(s) responsible for installing them, nor determined what purpose they're intended to serve.

That lack of knowledge, of course, opens the door for people who follow up "no one knows what they're for" with "therefore I will proceed to tell you exactly what they're for."  So far, I've seen the following:

Okay, will all you people just calm down for a moment?

So far, the only plausible explanation I've seen came from Salt Lake City Recreational Trails Manager Tyler Fonarow, who said the antennas might be "related to cryptocurrency and relaying networks and being able to make money off that."  Not only does that make at least some degree of sense, but he's the one who's in charge of removing the antennas when they're found, so he's actually seen the things, unlike virtually all of the people who think they're alien weather manipulation devices or whatnot. 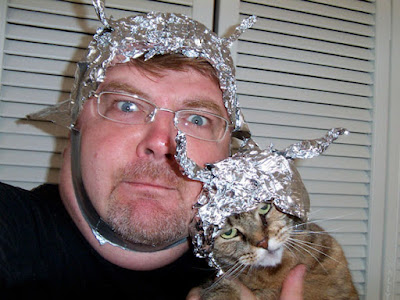 Local officials are understandably perturbed at some person or persons using public land to install antennas, and would like it to stop regardless what purpose they're for.  "We just don't leave things on public lands anymore," Fonarow said.  "You have to ask for permission...  We want to stop it now before it becomes a dumping ground for dozens and dozens more antennas."

What I'd like to see stop is people taking a scanty handful of actual hard facts and then running right off the cliff with them.  Whatever the antennas turn out to be, I'd wager cold cash that the explanation won't be one of the ones in the bulleted list.  Which, of course, will discourage the woo-woos not at all.  They'll just hang their heads and shuffle their feet in embarrassment for about five minutes, then suddenly forget all about it and rush off bleating toward the next "mysterious and unexplainable" occurrences, apparently having learned nothing from the fact that they've been wrong the previous 1,284,926 times this has happened.

And the woo-woos call the rest of us "sheeple."

Anyhow, that's the latest from the conspiracy theorists.  Antennas in Utah.  Now, keep in mind that if I'm scoffing, it's probably only because the Bad Guys have activated the 5G microchip in my brain, and it's making me broadcast misinformation.  You know how that goes.