A loyal reader of Skeptophilia asked me, rather offhand, if I'd heard of "British Israelism."  I hadn't, and he went on to explain that it's the idea that the British (and therefore Americans of British ancestry) are the descendants of the Ten Lost Tribes of Israel.
As soon as I heard that last bit, I said, "Uh-oh."  I did a piece a while back about the fact that there are so many groups claiming to be the descendants of the Ten Lost Tribes that calling them "lost" is something of a misnomer.  In fact, if you do any reading on the topic, you'll come away with the impression that you can't throw a rock without hitting a Ten Lost Tribesman. 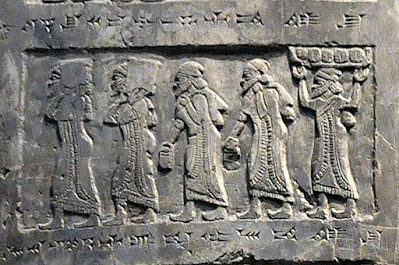 Delegation of the Northern Kingdom of Israel bringing gifts to Assyrian King Shalmaneser III [Image licensed under the Creative Commons Osama Shukir Muhammed Amin FRCP(Glasg), Black Obelisk side 4 Jewish delegation, CC BY-SA 4.0]
But even so, the British Israelists are in a class by themselves, given how thoroughly fleshed-out their ideas are.  I mean, the ideas are horseshit, but it's amazingly detailed horseshit.  Here are a few of their chief tenets:
Well, the first thing that comes to mind about all of this is that the Israelists have broken a cardinal rule, to wit, "don't fuck with a linguist."  None of their supposed etymologies are even within hailing distance of the truth.  Just looking at the "Tribe of Dan" ones -- of which none have anything to do with the Tribe of Dan -- let's start with Dundee and Dunkirk, which both contain the Celtic word dun meaning "fort" (as do Dunblane, Duncannon, Dunearn, Dunfermline, and dozens of others).  London comes from the Latin Londinium (which was probably a latinization of a Celtic place name).  Danube comes from the Celtic Danu (the same gods referenced in the Tuatha Dé Danann, but the fact that they were right about that one thing brings to mind my dad's remark that "even a stopped clock is right twice a day").  Denmark comes from a Germanic tribe called the Dani.  Finally, Macedonia comes from the ancient Greek μακεδνόι, which means "tall people."
Put a different way, linguistics is not some kind of bastard child of free association and the Game of Telephone.
The bottom line is, it's mighty odd if the English are direct descendants of the Israelites, there is not a shred of evidence -- anthropological, genetic, linguistic, or archeological -- of that connection.  What the Israelists have is an amalgam of quasi-evidence (mostly in the form of folk legends and mythology), mixed well with misinterpretations and outright falsehoods.  Despite all that -- to my astonishment -- it still has its fervent adherents, including the leaders of the Church of God International and the members of the Christian Identity movement.
Where it gets uglier, though, is that the Israelists, especially after the idea took hold in the United States, devolved into sickening levels of antisemitism.  This initially puzzled me, because you'd think that any group so gung-ho about the Israelites would be equally chummy with the Jews, but no.  The leading proponents of the idea have taken great pains to distance themselves from modern-day Jews, whom they consider "usurpers" and "imposters."  Some go so far as to believe that modern Jews aren't the descendants of the Israelites at all, but come either from Adam having sex with the demonic Lilith, or the Serpent having sex with Eve, or possibly both.  Anthropologist Michael Phillips, commenting on this bizarre doctrine, said that the belief allowed an adherent to "maintain his anti-Semitism and at the same time revere a Bible cleansed of its Jewish taint."
All of which illustrates something we've seen here before, which is that bigoted assholes will latch on to any gossamer scrap of evidence they can find to support their abhorrent ideas, and failing that, will make some up.
Anyhow, to the reader who sent me the link, thanks for sending me down a several-hours-long rabbit hole that left me thinking if the Daleks ever invade the Earth, I might just tell 'em, "Exterminate away, little buddies, there's no intelligent life down here anyhow."  Every time I think I've plumbed the absolute depth of stupidity, I find that someone has found the bottom and started to dig.
****************************************