Here in the twenty-first century, it's easy to deride the ancients for their belief that the Earth was the center of the cosmos, and everything revolved around it.
After all, that's certainly what it looks like.  We still talk about the Sun "rising" and "setting" -- even though we know the Earth orbits the Sun, the terms are a convenient way to describe our experience.  (Well, to be absolutely accurate, the Earth and the Sun both orbit their common center of gravity, but the Sun is so much more massive that to say the Earth orbits the Sun is substantially accurate.)
Even after Copernicus showed that the heliocentric model is correct, it still left us to explain the apparent motion of the stars.  As we gradually learned more, we found that we are far from the center of the universe; we orbit a rather ordinary star in the outer reaches of a rather ordinary galaxy.  It still boggles my mind that they figured this last part out.  Not only are we at the periphery of the Milky Way, and therefore seeing it edge-on, a lot of the bright central bits are obscured by dust.  But even so, we've now amassed enough data to understand that the Milky Way is a barred spiral galaxy, and even to map out its main features. 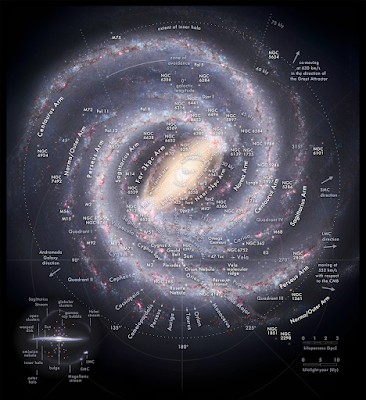 If ever there was an image you need to study in detail, this is it.  Take a look at the original, close up.  The Solar System is in the Orion Arm, directly down from the center of the galaxy.  The thing that blew me away is the circle marked "Naked Eye Limit" -- literally every star you have ever seen without the use of a telescope is in that little circle.  [Image licensed under the Creative Commons Pablo Carlos Budassi, Milky way map, CC BY-SA 4.0]
And if you want to feel even smaller, the Milky Way is just one of a hundred thousand galaxies in the Laniakea Supercluster, which stretches over a distance of 520 million light years.  And weirdest of all, the entire supercluster's center of gravity is at a point called "the Great Attractor," but we can't see what's there because it's on the other side of the Milky Way's center.  If there's actually something there holding the entire Laniakea Supercluster together, it's currently hidden, and will be for another hundred million years -- at which point the Solar System will have made a half-revolution around the Milky Way and will be able to see what, if anything, is out there.
The reason this topic comes up is a recent survey by the Hubble Space Telescope that found good evidence that there are stars -- and therefore probably associated planetary systems -- out there in the space between the galaxies.  It picked up "intracluster light," a faint glow produced by these unaffiliated stars.  What was fascinating and unexpected is that when you look at progressively more distant regions of space -- and thus, back further in time -- the amount of that ghostly glow doesn't change, which implies that earlier models attributing these orphan stars to the chaos resulting from galactic mergers or close side-swipes can't be true.  It looks like there have always been stars floating out there between galaxies.
Think about what it'd be like to live on a planet around one of those.  Remember the circle on the map marked "naked eye limit?"  Within the naked eye limit of a planet around one of those orphans, there would be nothing.  The skies would be pitch black... until the telescope was invented.  And then, what a surprise they'd get!  (If they'd even think of inventing the telescope -- why would you, when it appears that there's nothing up there to see?)
"We don't exactly know what made [the orphan stars] homeless," said astrophysicist James Jee of Yonsei University, who co-authored the study.  "Current theories cannot explain our results, but somehow they were produced in large quantities in the early universe.  In their early formative years, galaxies might have been pretty small and they bled stars pretty easily because of a weaker gravitational grasp."
More data should come in from the newly-deployed James Webb Space Telescope, and that may clarify this fascinating conundrum.
The ancients found it unsettling that we might not be at the center of the universe, and later that the universe is astonishingly larger than they ever dreamed.  Me, I find it reassuring.  My own little petty day-to-day concerns and worries seem like nothing at all on the scale of the Laniakea Supercluster.  Looking up on the next clear night, remember that little circle marked "naked eye limit" -- and think about what there is up in the night sky that you're not seeing.
Including the ghostly light of millions of orphan stars, lost in the deeps of interstellar space.
****************************************