Making pottery is a complicated enterprise.

I say this from some degree of personal experience.  About ten years ago, on the urging of my artist wife, I took a class to learn how to throw pottery.  For those of you who have no experience with this particular avocation, I'm not talking about hurling plates against the wall, which, of course, you wouldn't need to take a class for.  "Throwing," in pottery parlance, is the process of using a spinning pottery wheel to shape symmetrical vessels out of clay.  Some people still use old-fashioned "kick wheels" -- where the axle of the wheelhead attaches to a heavy stone disk set in motion with the feet, and the momentum of the disk keeps the wheel spinning (for a while, at least).  Fortunately -- because learning to use a kick wheel takes a whole different level of coordination -- I learned to throw on an electric wheel, the speed of which is controlled by a foot pedal a little like the accelerator of a car.

Which is hard enough.  The first pieces I made looked like they were created by a kindergartner, or perhaps an unusually talented chimp.  I'm not very artistic, and improvement was slow, but I've gradually gotten to the point where I can turn out a decent-looking piece of pottery. 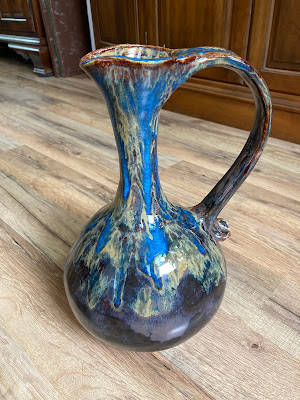 One of my better efforts

My first pottery teacher told us, "Never get attached to a piece until it's cool, in your hands, after the final firing."  It's good advice.  There are a million things that can go wrong.  After the piece is thrown, it still needs to be trimmed (removing excess clay at the bottom and finishing the shaping), have any modifications added (such as the spout and handle on the pitcher in the photograph).  Then it needs to dry -- without cracking.  (Cracks usually happen because the piece dried too fast or else unevenly, often when it has thicker walls at the bottom -- a common amateur mistake.)  Then it has to be "bisque fired," converting the raw clay to ceramic, usually at a temperature of about 1000 C.  Then it's cooled, and (most often) coated with a glaze to make it both attractive and water-tight, and re-fired at a higher temperature (depending on the clay and glaze used, between 1200 and 1400 C).  At every stage, the piece can crack, warp, or sag.  The glaze can malfunction in innumerable ways, including forming blisters or pock marks, pulling away from the clay (crawling), splintering as it cools (shivering), or even adhering to the clay and then shrinking and triggering spiral cracks (dunting).

Or, as happens all too often, you can just take the piece out and think, "why did I glaze it this way?  This looks like crap."

But every once in a while, all the stars align, and you get a piece that's really nice. 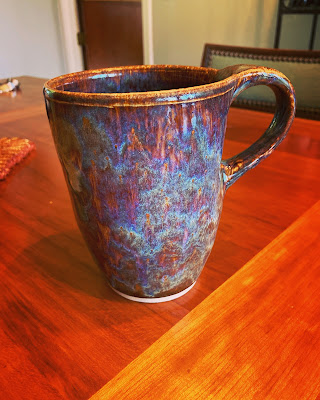 The reason all this comes up is a new study in Nature Human Behavior that looked at two interesting things: first, how far back the tradition of pottery-making goes; and second, once it arose, how quickly it spread.  The earliest pots known come from about 16,000 years ago in China and Japan, but after that it very quickly spread amongst the hunter-gatherer societies, and by 10,000 years ago it was found throughout the Near East and Europe.  (Pottery-making in Africa and the Americas is thought to have had an independent origin, but showed up around the same time.)

Human history has been shaped by global dispersals of technologies, although understanding of what enabled these processes is limited. Here, we explore the behavioural mechanisms that led to the emergence of pottery among hunter-gatherer communities in Europe during the mid-Holocene.  Through radiocarbon dating, we propose this dispersal occurred at a far faster rate than previously thought.  Chemical characterization of organic residues shows that European hunter-gatherer pottery had a function structured around regional culinary practices rather than environmental factors.  Analysis of the forms, decoration and technological choices suggests that knowledge of pottery spread through a process of cultural transmission.  We demonstrate a correlation between the physical properties of pots and how they were used, reflecting social traditions inherited by successive generations of hunter-gatherers.  Taken together the evidence supports kinship-driven, super-regional communication networks that existed long before other major innovations such as agriculture, writing, urbanism or metallurgy.

What blows me away about all this is that -- as I said earlier -- pottery-making ain't easy, and that goes double if you don't have modern technology to help.  First, you have to find a source of usable clay, which is by itself not simple.  Clays, depending on their chemical composition, fuse and turn into ceramic at different temperatures; an iron-rich earthenware, such as the clays used by the amazing potter Lucy Martinez, of the San Ildefonso Pueblo community, fire to a much lower temperature than kaolin-rich fine-grained clay of the type used in the classic Jingdezhen porcelains.  Fire a piece made from earthenware clay to the temperature used for porcelain, and it will simply melt into a puddle all over your kiln shelf.

Then there's learning which materials to use as glazes.  Our ancestors didn't have the refined glazes in plastic bottles that I use; they had to learn which naturally-occurring minerals would melt and coat the surface.  Not only did they have to concern themselves with coverage and water-tightness, they had to learn -- the hard way -- about safety.  Many of the prettiest glazes contain such dangerous heavy metals as cobalt, barium, and lead, and using vessels with those glazes for cooking or serving food could be downright dangerous.  (Now, chemists have done extensive testing on glazes to determine whether they're "food safe;" lead and barium have been almost entirely eliminated, and cobalt formulated so it stays put in the glazed surface and doesn't leach into your bowl of soup.  Fortunately for potters, because cobalt is an essential ingredient for just about all beautiful blue glazes.)

So what's amazing is that our ancestors learned all this by trial-and-error.  No wonder that after that -- as the researchers found -- the technology spread like wildfire.  Everyone would want to learn something that useful.

It's cool that in these days of mass production there are still people who want to learn this ancient skill.  Maybe today, with our electric wheels and factory-processed clays and bottled, tested glazes, we've got it easy compared to our forebears, but we are still using the same skills of shaping and refining and decorating that were developed ten thousand years ago.  When I get on the wheel to make a serving bowl or a coffee mug or a pitcher, I'm working in a medium that links me, in an unbroken line, back to nomadic hunter-gatherers who discovered that with little more than natural materials, a hot enough fire, and a pair of strong hands, you could make something that would last for millennia.