Mark Twain quipped, "Clothes make the man.  Naked people have little or no influence on society."

Given the fact that most of us are clothed most of the time, it's easy to lose sight of how odd it is.  We're one of the only species that covers our bodies -- the only others I can think of offhand are hermit crabs and caddisfly larvae.  In the climate where I live, of course, a lot of it is necessity.  For nine months of the year, we get temperatures that would be pretty uncomfortable if we weren't dressed warmly; for six of those months, if I ran around naked I'd risk freezing off body parts I still occasionally have a use for.

Even when it's warm, though, just about all of us wear some kind of body covering, for the sake of adornment, propriety, or (usually) both.  It's a custom in just about every culture on Earth.

But how long has this been going on?  Its ubiquity speaks to its antiquity; something shared by almost everyone is probably either highly important, or else very old.  (Once again, probably both.)  When we picture our distant ancestors, we usually think of them in furs and skins: 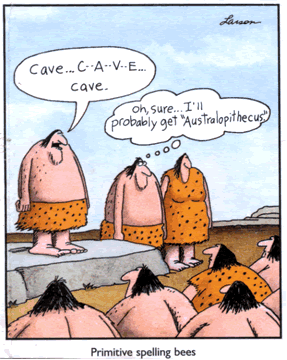 Some new research on fossils in Germany suggests it might be a lot longer ago than we realized -- perhaps as much as 300,000 years.

Archaeologists studying bones of cave bears (Ursus speleus) near the town of Schöningen found knife marks on the phalanges, metacarpals, and metatarsals -- the bones of the paws.  When butchering an animal for meat, the paws are usually ignored; there is little meat there, so the effort just isn't worth it.  The archaeologists studying the site claim that this is evidence that the men and women who cut up the unfortunate bears whose remains are at the site were after something else -- fur.

"The study is significant because we know relatively little about how humans in the deep past were protecting themselves from the elements," said Ivo Verheijen of the University of Tübingen, co-author of the study, which appeared two weeks ago in The Journal of Human Evolution.  "From this early time period, there is only a handful of sites that show evidence of bear skinning, with Schöningen providing the most complete picture.  We found the cutmarks on elements of the hands/feet where very little meat or fat is present on the bones, which argues against the cutmarks originating from the butchering of the animal.  On the contrary, in these locations, the skin is much closer to the bones, which makes marking the bone inevitable when skinning an animal."
The skins could have been used as clothing, but also might have been bedding.  The earliest evidence of sewing -- eyed needles -- comes from about 45,000 years ago.
So the discovery in Germany doesn't cinch down our ancestors from 300,000 years ago as being clothes-wearers, but it does mean they were aware of the use of animal pelts for something.  And given how cold it was back then, it'd be surprising that they didn't go pretty quickly from "This is comfy to sleep on" to "I could stay a hell of a lot warmer if I draped this around myself."
One thing I've always wondered is how we've become the only animals that have any sense of modesty about certain body parts, which (after all) we all have in some fashion or another.  It's one of those things that seems perfectly reasonable until you start thinking about it.  Customs do vary from place to place, of course; when we were in Denmark in summer, we saw women sunbathing topless, and nobody batted an eyelash.  In America, that'd cause some serious freakouts, and probably arrests for indecent exposure, even though guys can run around shirtless all they want.  And as far as the parts farther down, just about all cultures have a taboo against exposing those.
It's odd.
In any case, wherever our sense of modesty comes from, it seems to be very, very old.  And given that behaviors don't fossilize, it's likely that we'll never know the full story.  But it looks like Gary Larson's visions of cave men and women wearing pelts might not be all that far off.
Although I doubt seriously whether they held spelling bees.
****************************************