The fingerprints of a slaughter

During the reign of Augustus Caesar, the Roman leadership felt very close to all-powerful.
They had enjoyed unbridled expansion into what is now France and Spain, the Near East, and North Africa.  The Roman legions were well-trained, disciplined, and powerful, led by ruthless men chosen because of their knowledge of strategy.  When they launched campaigns northward, against the Germanic tribes who lived in what is now Austria, Germany, Denmark, and the Netherlands, it seemed like it was only a matter of time before just about all of Europe came under Roman sway.
That all came to a screeching halt in the year 9 C.E.
I'd heard about the overwhelming defeat of the 17th, 18th, and 19th Legions near the village of Kalkriese, Germany in my college history classes, but I got a much better perspective on it last year when I read the wonderful book The Battle that Stopped Rome: Emperor Augustus, Arminius, and the Slaughter of the Legions in the Teutoberg Forest by Peter S. Wells.  The general gist is as follows.
Arminius (known in German as Armin or Hermann, but most historians use his Latin appellation of Arminius) was a chieftain of the Cherusci, a Germanic tribe who lived in northwestern Germany.  Arminius had been sent to Rome by his father, Segimerus (Sigimer), after the latter had agreed to become a vassal of the Roman Empire.  Many of the Cherusci resented this deeply -- Arminius amongst them.  But while he was in Rome, he played along, and learned a great deal about Roman military strategy, and eventually achieved Roman citizenship.
By trusting him, the Romans had sown the seeds of their own defeat.
Upon Segimerus's death, Arminius returned home to take up the chieftainship.  At the same time, the three legions that were charged with maintaining the peace in Germany were taken over by a brutal man named Publius Quinctilius Varus, whose harshness raised a great deal of ire amongst the Germanic people -- both those who were enemies and those who were nominally friendly.  Arminius became Varus's trusted advisor -- and used his knowledge to forge secret alliances with a number of other groups in the area.
The plans came together in autumn of the year 9 C.E.  The weather was turning bad, and Varus wanted to get his legions back to Rome before it became too difficult to travel.  What is especially ironic is that Arminius's uncle, Segestes, warned Varus the night before they decamped that Arminius was a traitor -- but Varus dismissed the warning as nothing more than a family feud and personal animosity at Arminius's popularity.
Arminius's training in strategy paid off.  He chose his site beautifully.  In the wooded hills near the modern town of Osnabrück, they entered a forest that was bounded by overgrown, thicketed hillsides on one side and a bog on the other.  This necessitated that they spread out -- by the time they were into Teutoberg Forest the legions were a long, straggling line over fifteen kilometers in length, hemmed in on both sides, with no easy place to mobilize defense and nowhere to run.
That's when Arminius sprang his trap.
All three of the legions were completely destroyed.  Varus himself survived, but the following day committed suicide in humiliation.  Total Roman losses in the debacle are estimated at between fifteen and twenty thousand.  A handful of men escaped -- or were allowed to escape -- to bring the news back to Augustus, who reportedly shouted, "Quinctili Vare, legiones redde!"  ("Quinctilius Varus, give me back my legions!")  It's said that Augustus never really recovered from the shock of the defeat; it certainly put an end to any serious attempt to recapture German territory, and the Rhine River became the boundary between the Roman Empire and the uncontested lands of the Germanic tribes for decades.  Augustus himself died almost exactly five years later, disappointed to the end at how his campaign for European domination had come to a crashing halt. 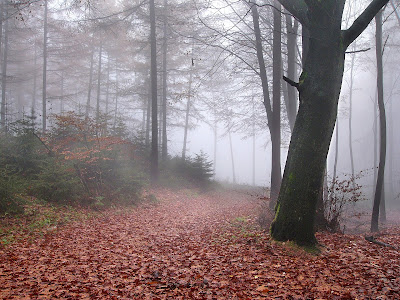 The Teutoberg Forest today [Image licensed under the Creative Commons Nikater, Hermannsweg02, CC BY-SA 4.0]
A lot of Roman artifacts have been found near Kalkriese -- significantly, very few Germanic ones -- but it's difficult to date metal with any kind of precision.  But a recent study of some of the artifacts by a team from the German Mining Museum Bochum, Leibniz Research Museum for Geo-Resources, and the Varus Battle Museum has developed a technique that suggests a way to identify the provenance of metal goods, and has pinpointed the artifacts from Kalkriese as coming from the 17th, 18th, and 19th Legions.
Thus, relics of the famous Battle of Teutoberg Forest.
Each Roman legion came with its own set of metalworkers, and each of them created their tools using a slightly different recipe for making bronze and brass.  Using a mass spectrometer, the researchers were able to pinpoint the subtle fingerprint of each legion's spearpoints, knives, shield fittings, armor, and jewelry, and from comparing metal objects known to come from the three "lost legions," they identified the articles from Kalkriese as remnants of one of the most famous battles ever fought.
"In this way, we can allocate a legion-specific metallurgical fingerprint, for which we know the camp locations at which they were stationed," said Annika Diekmann, one of the co-authors of the study.  "We find that the finds from Dangstetten [where the 19th Legion was stationed prior to their destruction in the battle] and Kalkriese show significant similarities.  The finds that come from legion sites whose legions did not perish in the battle, differ significantly from the finds from Kalkriese."

It's fascinating that we now have a way of identifying archaeological artifacts that are non-organic, where such techniques as carbon dating don't work.  What is now a quiet, peaceful forest was once the site of unimaginable bloodshed, in a battle that altered the course of history.  Looking at these objects brings home the impact of this victory on the Germans; Arminius is still considered a national hero, and the imperial ambitions of Rome were changed forever.
****************************************