The attack of the sky jellyfish

After recent posts about the state of education in the United States, the role of religion in politics, and the validity of non-Western approaches to medicine, it's high time we turn our eyes to more serious and pressing topics, namely:  giant invisible sky monsters terrorizing Japan.

Enter Brent Swancer, writer for the site Cryptomundo.  Cryptomundo is not only one of the world's leading sources for breaking news regarding creatures that probably don't exist, it is also one of the only places where you can buy a Sasqwatch, which is a wristwatch with a band shaped like a huge, hairy foot, and has a Bigfoot on the dial whose arms move to tell you the time.  I must point out at this juncture that my birthday is coming up soon, and I don't currently own a Sasqwatch.  So if you're looking for ideas, you might want to take that into consideration.

Be that as it may, Swancer has written an exposé regarding recent events in Japan, and it makes quite a story.  His article (which you can read in its entirety here) describes the upswing in weird events following the Japanese tsunami.  These include "strange flying anomalies" of various shapes.  Swancer looks first at the idea that these might be alien spacecraft, but then dismisses that notion; just because you see something odd in the sky, he says, you shouldn't jump to the conclusion that they're aliens.  No, you should jump to an entirely different conclusion: that they're giant flying monsters.

Wait, you may be saying; why, if there are giant flying monsters up there in the air, don't we see them more often?  Well, first, they fly so high that they usually can't be seen from the ground.  Second, they can "adjust their density from almost immaterial and invisible to more solid, depending on as yet unknown factors."  As proof, he then shows a series of photographs, some of which are oddly-shaped clouds, and the rest of which even I, with my limited technical expertise, could create from a photograph of the sky given five minutes of playing around with the "Distort" function on PhotoShop.  Here is an example: 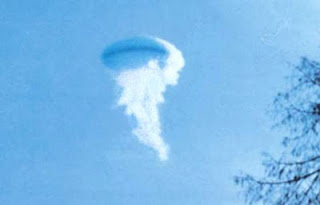 He says this is, quote, "Some sort of sky jellyfish."

Swancer then speculates that the Japanese earthquake and tsunami caused a "release of highly-charged particles" that may have disrupted the navigation systems used by the giant atmospheric creatures, causing them to become confused and making them fly at lower altitudes, or possibly making them forget to turn on their cloaking devices.

You might be asking yourself, how do we know these creatures exist?  Well, Swancer says, we don't.  This is "all speculation," he states, but goes on to say that there are lots of other things that biologists have discovered that are so strange that we wouldn't have believed them without evidence, so if this is so strange that we don't believe it, it must be true, as well.  As further proof, he concludes with a final image: 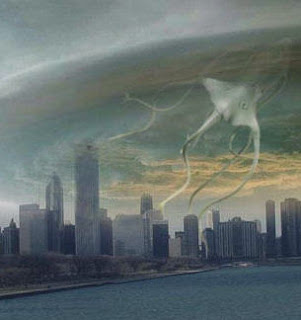 Which, after a small amount of research, I was able to identify as a "Dogora Cloud Beast" from a Pokémon card (see the original card design here).

So, in any case, I think we can conclude from this that we are reasonably safe, for the time being, from having our hometowns attacked by giant flying squid.  Watch out for the enormous sky jellyfish, however.  I hear those things pack a nasty sting.
Posted by Gordon Bonnet at 4:52 AM