Beasts in the east

For any of my readers who happen to live in Russia, you should consider attending the International Yeti Festival that is occurring this week in Tashtagol.

The whole thing is being organized by Igor Burtsev, who runs the "Yeti Institute" at Kemerovo State University.  I didn't know that some universities had departments of yetiology, did you?  Seems like they wouldn't have much to do, given that the object of their study has never left behind any actual evidence other than a few footprints and some fuzzy film footage.  But somehow, Burtsev is being taken seriously enough that investigators from six countries are gathering to share their evidence at the International Centre for Hominology in Tashtagol.  Maybe he garners a little extra credibility because he looks a great deal like Papa Lenin: 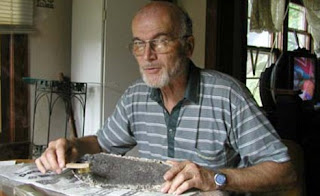 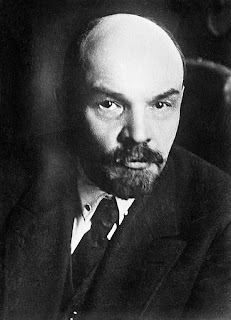 Be that as it may, Burtsev is understandably excited, because he claims that his home of Kemerovo is a hotbed of Yeti activity.  He believes that there's a tribe of thirty or so Yetis in the area.  (What do you call a group of Yetis?  A shriek of Yetis?  A lope of Yetis?  A squatch of Yetis?)  They are, Burtsev says, the surviving remnants of the Neanderthals, and are notorious for sneaking onto people's farms and stealing sheep and chickens.

This isn't the only recent attempt to track down the Russian answer to Bigfoot.  A couple of months ago, Russian heavyweight boxer Nikolai Valuyev led a much-publicized expedition into the wilds of central Russia.  After stomping around the place for several days with a camera crew, all they found as evidence were "some broken branches" and "a few enormous footprints."  Valuyev wasn't discouraged by the fact that he didn't find the Yeti, however; he's still sure they're out there.

At this point, perhaps I should show you a photograph of Valuyev. 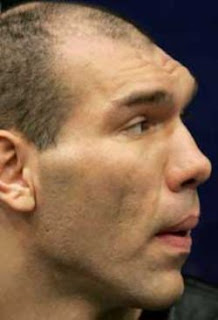 He may have a somewhat personal reason for wanting to find the Yetis, if you get my drift.  The guy is seven-foot-two, and his nickname is "The Beast from the East."

In any case, the Yeti Conference should prove interesting.  It is, the news release said, the first conference of its kind since 1958, and will result in sharing all sorts of secret documents from the Cold War.  Me, I thought the Soviets had better things to do during the Cold War than amass information on Yetis, but what do I know?  The more time they spent wandering around looking for "enormous footprints," the less time they had to spy on us.

Anyhow, here's another thing that I'd definitely attend, if I could -- along with the ghosthunting classes in England and the workshop where you learn how to be a shapeshifter in Costa Rica.  So much to do, so little time.
Posted by Gordon Bonnet at 2:38 AM