It's been another busy week here at Worldwide Wacko Watch.

First, we have news that the Church of Scientology spent years investigating the creators of South Park.

You may remember that about five years ago, South Park made headlines with an episode called "Trapped in the Closet," which featured noted Scientologists Tom Cruise and John Travolta, and ridiculed Scientology in general.  Cruise responded, predictably, by having a tantrum, but this time he didn't assault Oprah; he just announced that he wouldn't help publicize Mission Impossible III, as Comedy Central and Paramount are both owned by the same parent company, Viacom.  Paramount executives basically shrugged and said, "Okay," and Mission Impossible III went on to net nearly $12.48, so it probably wouldn't have mattered if Cruise had helped publicize it or not.

In any case, you'd think that in any normal situation, this would have all blown over and been forgotten, but your mistake would be applying the word "normal" to the Scientologists.  They began to secretly look into South Park creators Matt Stone and Trey Parker, trying to dig up dirt about them so as to discredit them.  Marty Rathbun, former Church of Scientology executive and current critic, has made records public that state that the Scientologists were even going through Stone and Parker's trash looking for evidence that they were using drugs or otherwise engaged in illicit behavior.

My general feeling is, anything that keeps the Scientologists busy rummaging through trash is probably in everyone's best interest.

And in case my commentary on this situation induces any Scientologists to look through my trash, allow me to just say up front that what appear to be bags of used kitty litter are, in fact, just bags of used kitty litter, and there is NO ILLICIT DRUG EVIDENCE IN THERE.  No, sir.  Don't even bother going through them, because you won't find anything incriminating.

And the same goes for the blobs of old coffee grounds.


Then, we have a video clip from Brazil that claims to have captured what appears to be an alien taking a piss behind a tree.

Or at least that's what it looks like to my untrained eye.  Let's take a look at a still from the video: 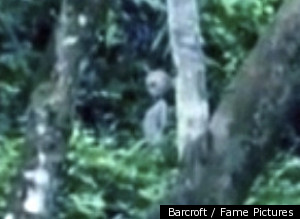 The video, which you can view here, is described by Mike Cohen of All News Web (which bills itself as "the world's only intergalactic news network") as being "highly compelling footage that will be hard to discredit."  This didn't stop Marc Dantonio, of the Mutual UFO Network, from noting that the head of the alien appears to wobble when the wind blows, in the fashion of one of those bobble-head dolls that truckers like to put on their dashboards.

Myself, though, I still like the "alien taking a piss" theory.  After all, I doubt there are many rest stops in interstellar space, so you can't blame the little guy.  When you gotta go, you gotta go.


Next, we have news from the Kemerovo region of Russia that the hunt for the Yeti has been unsuccessful.

You may recall a Skeptophilia post a few weeks ago about an expedition into the wilds of Siberia, looking for the Asian cousin of America's Bigfoot.  The whole thing was the brainchild of Russian Yetiologist Igor Burtsev, who organized a Yeti Conference for researchers from all over the world, and then led an expedition to go see the sites where Yetis had allegedly been spotted.  These included a cave and a "Bigfoot nest."  And, right on schedule, the team found gigantic footprints, broken branches, and bits of hair.  Case closed!  The Yeti is real!

Well, maybe not.  Dr. Jeff Meldrum, an American researcher who went to the conference, isn't buying it.  He said the whole thing went a little too easily to be convincing -- it had the air of something staged.  The hair has yet to be analyzed, and the footprints, Meldrum said, "show depth and line characteristics that are consistent with fakes."  As for the "nest," Meldrum became suspicious of it when he noticed that the "bent and twisted saplings" had actually been notched with saws.

Another curiosity is that the alleged Yeti footprints are only from right feet, as if the Yeti that produced them had been engaged in a game of hopscotch.

So, I guess we have to place this one in the "probably not" column.  Too bad.  Because it would have lent critical credence to our next story, to wit:


A brief report has come in from comically-named High Knob, Virginia, where a fellow named Tyler Bounds allegedly struck a Bigfoot with his car Sunday night at around 2 AM.  We're unsure how much to credit this story, however, as (1) there was no blood or hair on the car, and (2) Bounds is an associate of Matt Moneymaker, of Animal Planet's "Finding Bigfoot," which made history as the only paranormal television show that jumped the shark faster than Monster Quest.  So we'll just state for the record that in the dark, an oak tree can look a lot like a Bigfoot, and move on.


In the Obituaries Section, we regret to inform you of the passing of Malcolm Dent, 67.  Dent was a boyhood pal of legendary Led Zeppelin rocker Jimmy Page, and was the curator of Boleskine House in the Scottish Highlands during the twenty years Page owned it.  Boleskine House is famous as having been the occult headquarters of Aleister Crowley, famed Satanist and self-styled "wickedest man on earth."

Crowley, who died in 1947, was infamous during his lifetime for holding rituals of black magic at Boleskine.  He belonged to the occult organization called "The Hermetic Order of the Golden Dawn," but founded a couple of others, Ordo Templi Orientis and Thelema, when it became apparent that one organization wouldn't provide him with nearly enough people of either gender to have sex with.  Boleskine House became known as a center of depravity and amoral behavior, so you can kind of understand Page's interest in owning the place.


So, that's the news here at Worldwide Wacko Watch.  We keep Watch on the Wackos, so we can bring the stories straight to your doorstep.  As usual -- All the News That's Fit to Guffaw At.
Posted by Gordon Bonnet at 3:11 AM