It will hardly merit mention to regular readers of this blog that, given an odd circumstance, I will look first for a rational, scientific explanation.  Although my field is biology, I know enough of the basics of the other sciences to have a good shot at coming up with a plausible explanation for most of what I see -- or, failing that, at least to recognize when a proposed explanation doesn't make sense.

Which brings me to the strange case of the standing brooms.

Apparently over the last few months, there have been multiple reports of brooms staying standing up after being set on end, sometimes for hours.  People report that they were resistant to falling over even if bumped or pushed, and several folks stated that it felt like a "strange force" was keeping the brooms upright. 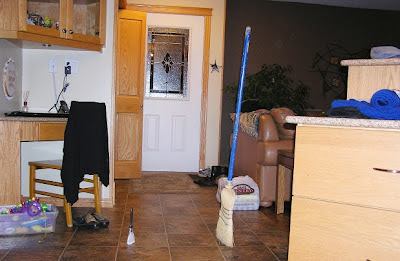 Naturally, once this sort of thing starts to be reported, we have a veritable explosion of silly explanations.  Here is a sampling of ones I saw on various websites:
Reading the impassioned exponents of each of those so-called explanations made me want to weep softly and bang my head on my computer keyboard, but I decided to man up and see if I could find anyone who had a more sensible approach.  I found this wonderful site ("Common Sense Conspiracy: We Filter the Bullshit So You Don't Have To!"), which attributes the phenomenon to simple physics -- almost any object will stand upright if it has a flat surface of some kind, and you can get the object's center of gravity to stay over its base of support.  Voilà -- a standing broom!

Of course, woo-woos never give up that easily.  Or sometimes at all.  The "comments" section was filled with rants about how no, it wasn't simple physics, because the broom would only stand up on second Tuesdays when the Moon was full and the appropriate words were chanted.  It can't just be a simple explanation!  It can't!

It is a mystery to me why so many people don't find the world as it is sufficiently wonderful and weird -- they feel like they have to make stuff up, push natural phenomena into supernatural molds, turn everything into some kind of paranormal mystery.  Isn't what actual, reputable scientists are currently discovering -- especially in fields like quantum mechanics, cosmology, neurology, and nanotechnology -- awe-inspiring enough?  Why do you need to muddy the whole situation by making stuff up, or coming up with loony explanations for what you see?

Now, mind you, I'm not saying that there aren't things that haven't been explained yet.  There are plenty, and good science is always pushing the envelope of what's known.  But I am confident that any real phenomenon is ultimately going to be explainable by science, because that's what science does.  It may seem supernatural now, but that's just because we don't yet comprehend what's going on.  As Robert Heinlein said, "Magic is science we don't understand yet."

But the brooms, alas, aren't even that; it's just simple mechanics at work.  No need to invoke solar flares or planets in retrograde.  I'm glad, actually; the whole thing brought up memories of Fantasia, which I'd really rather not think about.  That movie scared the hell out of me when I was a kid.
Posted by Gordon Bonnet at 2:36 AM