Well.  And I thought that the only thing we had to worry about, sun-wise, was the appearance of a Massive Unknown Object that was tethered to the sun and slowly draining it of energy.  As the responses of six regular readers of Skeptophilia to yesterday's post show: a lot I know.

Besides the game of cosmic tetherball currently involving our home star, we also have another thing to fret about, which is a giant triangular coronal hole.  Well, not the coronal hole itself, which is a purely natural phenomenon, but the reactions of thousands of woo-woos who, upon seeing the photographs, immediately started running around making terrified little bleating noises.  I mean, people seriously need to calm down, or someone's gonna get hurt.

First, let's take a look at a photograph of the phenomenon, once again courtesy of NASA: 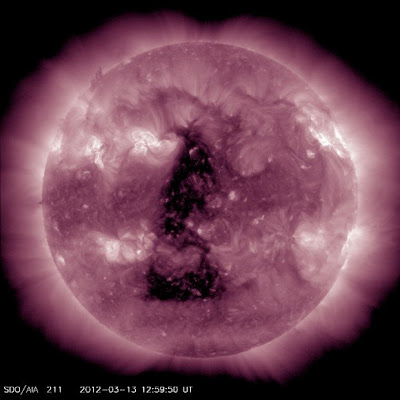 Okay.  So, even I have to admit, it's kind of creepy-looking.  But, I assure you, it's harmless -- all it is is a place where the sun's magnetic field has shifted, changing the speed and direction of the solar wind.  A solar storm, so to speak.  It could cause brighter-than-average auroral displays, but here on Earth, that's about it as far as impacts.
Tell that to the woo-woos.  Here is a sampling of comments on posts, blogs, and websites regarding the phenomenon, which I replicate here verbatim:

"Could the pyramid be a sign of the new world order that's about to be achieved? You know.. like what's on the dollar.  The triangle.. the novos ordo seclorum.  (New world order).  HMMMMMM?"

"The first thing I noticed is that the configuration is the same as Orion's Belt.  That's significant."

"The SUN WARMS... the SUN WARNS!!!  The heavenly signs are up there for those that have EYES TO SEE!!!"

"The sun is crystallizing, or something.  It's turning into a merkabah."  (I had to look up what a "merkabah" was.  It's god's chariot, such as was seen in the visions of Ezekiel, an event that goes on record as the world's first known bad acid trip.)

"What's the possibility that all celestial bodies have this shape as their inner core, as opposed to the round core commonly considered?  If this was true, couldn't it account for the importance of this shape to every ancienct [sic] civilization so far discovered?  The properties attributed to this shape alone is remarkable, and, possibly applicable, if considered.  Think of it.  This shape creates energy.  It is said to effect force fields.  Think of the spin of round bodies.  The attributes of this triangular core might contribute to a cascade of complimentary forces that would keep a body upright and spinning.  Not knowing science to any degree, I still can't figure the magnetic pole parts, or, what happens in a pole reversal, yet, the properties of triangular bodies containing an infinite number of it's [sic] own kind, including those additional shapes formed by them, seems to make this idea worthy of a few moments of consideration, even if unusual, or, to mainstream thinking, implausible.  Well, that's what I posit, when I look at that anomoly [sic].  What is causing it to show itself is quite another matter. That I have no clue about...except to say that the energy that the Sun has been ejecting lately probably needs to build back up."


Oh, really?  You posit that, do you?  Even though you don't "know science to any degree?"  It never fails to amaze me that people who have no understanding of science whatsoever still think they have valuable contributions to make in the field just based on their "feelings."

But then, there's one last comment I saw that I just have to throw in:


So, there you have it, folks.  A coronal hole leading to a massive outpouring of foolishness.  I know that correlation doesn't equal causation, but I think here we might have a pretty good case.
Posted by Gordon Bonnet at 2:27 AM