The monolith on Phobos, and why the aliens are avoiding us

In Stanley Kubrick's seminal science fiction movie 2001: A Space Odyssey, Earth astronauts discover a monolith on the Moon that turns out to be a signal transmitter to a super-powerful race of aliens.  Uncovering it alerts the aliens that we have become sufficiently advanced that we have made it into space -- letting them know that we had achieved a high enough technological level that we were ready to take the next step, which turned out to be spending twenty minutes watching psychedelic colored lights and the main character's eye blinking.

Well, according to a new claim, based upon NASA photographs, Kubrick's vision may have been prophetic -- he just got the location of the monolith wrong.

Take a look at this photograph of the surface of Phobos, one of the two moons of Mars: 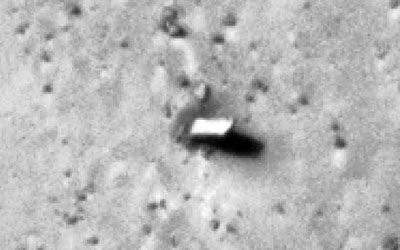 The stick-in-the-mud, dry-as-dust scientists at NASA say this is just a tall, vaguely rectangular boulder.  This ignores the truth, which is that it is a structure placed there by a highly advanced alien species, of unknown motives, so we should proceed with caution.  After all, three separate probes have all disappeared on or near Mars -- the 1988 Phobos-2 spacecraft, the 1999 Mars Climate Orbiter, and Beagle-2 in 2003.

Oh, and also: Phobos is hollow, and is actually a spacecraft launched in 1876 that is peopled by aliens whose job is to monitor what we're up to here on Earth.

By this time, you're probably wondering who dreamed all of this up.  It will come as no surprise to hear that this is the brainchild of: Richard C. Hoagland.

Yes, Hoagland again, he of the Face on Mars, the faking of the Moon landing, hyperdimensional super-energy inside the dormant volcano Mauna Loa, the crop circles on Saturn, NASA being a thinly-disguised cult that worships the Egyptian god Osiris, and the idea that the universe is being controlled by a Giant Radioactive Bunny from the Andromeda Galaxy.  Okay, I made the last one up, but it would be hard to tell, frankly, because a lot of Hoagland's ideas leave me thinking that where most people have a brain, he has a half pound of Malt-o-Meal.

So, anyway, given Hoagland's track record I'm voting for the "big boulder" hypothesis regarding the Monolith on Phobos, boring as that may be.  But this isn't the only news from the skies -- we also should mention the claim last week, by Russian astronomer Sergey Smirnov, that the aliens aren't landing on Earth and making contact because they think we're "childish idiots."

"They don’t really like the way we are polluting our planet," Smirnov told reporters.  "Obviously, they warned all the space inhabitants to avoid contacts with the Earth, because our civilization is dangerous and all the secrets they might reveal to us will be used for constructing a new super bomb or poison."

So, basically, we're sort of the interstellar version of the creepy guy on the subway who hasn't bathed in weeks and looks like he might mug you if you get too close.

Anyhow, that's our news from the world of space research.  And maybe Smirnov's right; perhaps the take-home message is that it really would be better if we just stuck around on Earth until we learned how to clean up our act, both literally and figuratively.  This goes double if Hoagland is right about what's on Phobos.  After all, look at all the trouble the guys in 2001 got into when they started investigating the monolith.  Their computer went bonkers, a bunch of them died, and one of them got turned into an Enormous Floating Space Baby.  And lord knows, we wouldn't want that to happen.
Posted by Gordon Bonnet at 2:47 AM