New from the "Okay, Really, You Actually Believe That?" department: a gigantic UFO is moored next to the sun, and is sucking energy from it in the fashion of a leech.

At least, that's the claim of a guy who seems to have spent too much time in the sun himself, who based his conclusions on the following photograph from NASA: 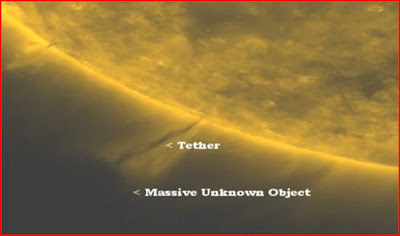 There are apparently two theories currently going around to explain what the Massive Unknown Object is trying to accomplish by this.  (1)  It is a benevolent Massive Unknown Object, which is siphoning off energy from the sun to prevent a solar flare from deep fat frying the entire Earth.  The siphoning is keeping us at just the right temperature, and is responsible for the abnormally warm weather much of the United States is currently experiencing.  (2)  It is a malevolent Massive Unknown Object, which is draining the sun of energy, the ultimate result of which will be that the sun will fade out and the entire Earth will become a frozen wasteland, sort of like Hoth in The Empire Strikes Back, but without any weird goat-things to ride around on and periodically disembowel to stay warm.

All of this has had the effect of making me want to shout at my computer, "Don't you understand the definition of the word 'unknown?'  It means you don't know!"  Of course, woo-woos never let a little thing like a complete lack of facts stop them, and there have been thus far a variety of videos that have showed up on YouTube, seemingly mostly made by people who really ought to be medicated, as well as impassioned posts on woo-woo websites imploring us to For God's Sake Do Something.  One of them urged NASA to try to contact the Massive Unknown Object and demand to determine its intent; another one, evidently posted by someone from the Woo-Woo Auxiliary Unit of the NRA, suggested shooting at it; and a third tied it to the upcoming Mayan apocalypse, which I suppose was inevitable.

But by far my favorite comment was one posted on a website that put up the photograph with an all-call for explanations from anyone who wanted to weigh in.  "Jesus H. Christ on a raft!" the poster wrote.  "A GIANT SPACESHIP is SUCKING ENERGY out of the SUN and people are UNSURE whether this is good or bad?  Wake up and smell the cold, dead planet!  People, people, people!  It's time to sell out and see if we can negotiate to at least keep Australia!  Madagascar!  South Central LA! Something!"

Oh, you silly folks!  It's gotten so I can't tell when you're joking!  So I'm just going to assume you are!  And hope that none of you know where I live!

Anyhow, that's the latest storm of controversy stirred up by the folks at NASA.  I'm sure that in a day or two, some guy at NASA will make a public statement to calm everyone down, assuring us that the Massive Unknown Object is actually a sensor artifact, which will have the result of making all of the woo-woos howl even louder that it's a conspiracy and a coverup and that we're all gonna die.  At least until they all stampede off, mooing wildly, toward the next blurry photograph that seems to show something that's actually not there.  In the meantime, I'm going to enjoy the amazingly warm weather the northeast is currently basking in.  Whether or not it's due to the energy-siphoning work of a giant alien spacecraft, it's pretty nice.
Posted by Gordon Bonnet at 2:33 AM