We're having an apocalypse. Again.

I remember reading some years ago, although I've forgotten the source, about a theory that connects the degree to which people engage in apocalyptic thinking with how godawful the conditions are at the time.  The author pointed to the decades following the Black Death in Europe, and 250 years later the misery that attended the Thirty Years' War, as spawning a resurgence of focus on the End Times -- and, interestingly, an increased persecution of individuals perceived as collaborating with the agents of evil.  It's almost as if people said, "Wow, this is some awful stuff we're going through right now, wouldn't it be nice if the powers-that-be would just press 'Reset'?  But until then, let's amuse ourselves by burning some witches."

I have been mystified recently by how much attention has been given to end-of-the-world scenarios, and not just by the religious.  Besides the Christian Rapture crowd, led by such luminaries of critical thinking as Harold Camping and Ronald Weinland, there has been the Mayan Apocalypse crowd, the Planet Nibiru crowd, and (to bring it into the realm of the marginally plausible) the Death Asteroids crowd.  And what has struck me, each time, is how enthusiastic everyone seems to be about these various scenarios.  You very much get the impression that these folks really would love nothing more than to see a giant rock turn downtown Baltimore into a humongous crater.

Which, I suppose, is why new and different proposals for bringing down Civilization As We Know It keep cropping up.  I ran into a new one just yesterday (described here), in which a Russian scientist, Alexey Dmitriev, goes into his own personal take on how we're all gonna die.

We are (Dmitriev says) about to run smack into an "interstellar energy cloud" that will propel us into "2,000 years of light."  This sounds good until you read a little more, and find out that Dmitriev blames the leading edge of this cloud for massive animal die-offs, hurricanes and tornadoes, climate change, and solar coronal mass ejections.  He includes this map to illustrate what's happening: 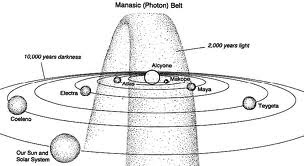 So, anyway, I'm looking at the diagram, and I'm thinking, "I see where we supposedly are, but who are all of those other folks... Electra, Celaeno, Alcyone, and so on?"  And then I thought, "Wait, those names are familiar..."  And finally I figured it out.  Those are the names of the Seven Sisters from Greek mythology -- the Pleiades.

Interestingly, the article I linked above doesn't mention anything about the Pleiades -- it goes on and on about how NASA is covering the whole thing up so as not to cause mass panic, but never explains that the map is showing the solar system orbiting around one of the Pleiades.  This is probably because, given that the Sun does not, in fact, orbit around the Pleiades, anyone who knows even a smattering of astronomy would then look at the article and say, "This is complete horse waste."

Interestingly, the article gives a link to a NASA press release (here), and only quotes one line:  "The solar system is passing through an interstellar cloud that physics says should not exist."  This, of course, makes it sound mysterious and scary.  The article doesn't mention, however, that in the very next paragraph of the NASA story, the author states that information from Voyager gave physicists the information they needed to figure it out -- and in any case, the cloud is a "wispy mix of hydrogen and helium" that is being held in place, far outside Pluto's orbit, by a bubble of stable magnetic field.  So, as usual, the apocalyptic woo-woos quoted just enough actual science that, taken out of context, it sounded scary.

What is more interesting, however, how... cheery the author sounds about the prospect of worldwide cataclysm:  "...this strange nebulous cloud of energy (will cause) the sun to become more excited than ever before... fueling the sun to erupt into one final burst of energy that could not only destroy everything we know about our society, but also herald in a new wave of consciousness as a new generation of highly advanced and technologically minded people attempt to put the pieces back together and the infrastructure sends humanity back to a level of technology comparable to the turn of the 19th century."

Doesn't this sound the same as what the Rapture folks and the Mayan apocalypse folks are saying?  "Okay, it'll be rough for a time, but don't worry, everything will be amazingly wonderful afterwards!"  You have to wonder why this kind of thinking is so popular these days -- everyone and his dog seems to be coming up with a new and improved version of how modern civilization is going to collapse.  And I started to wonder: "Is it because things are kind of cruddy now?"  I mean, we don't have anything as catastrophic as the Black Death to try to recover from, come to terms with, and explain; but there are hundreds of more ordinary bad things -- economic woes, wars, terrorism, unemployment, hate crimes...  It did cross my mind to speculate that some of this neoapocalypticism (to coin a new, and almost unpronounceable, word) might be fueled by people looking around them and thinking, "This is dreadful.  Maybe we should just start over."

I also wonder if it might be fuel to the fire of the hypermoralistic wingnuts who are currently trying to promote government intrusion into women's rights and every facet of human sexuality, despite that it is these same folks who chant the mantra of "small government" with no apparent awareness of a break in the logical chain.  To listen to Rick Santorum, contraception, gay marriage, and pornography are going to lead directly to the fall of the United States; and if you look at folks like Brent Bozell (not directly!  Wear protective eyewear!), you'd come away with the impression that movies with scenes showing people having sex are going to destroy the moral fabric of the entire society.

It's the same thing, isn't it?  The world is facing some pretty serious problems; day-to-day life can be kind of depressing; and we have a sudden resurgence of apocalyptic thinking and persecution of people on the basis of morals and beliefs.  In so many ways, we haven't progressed much with comparison to our ancestors from the 14th century -- a thought that is not all that reassuring.
Posted by Gordon Bonnet at 2:56 AM