Fans of the claim that a plesiosaur left over from the Cretaceous Period lives in Scotland's Loch Ness just got a shot in the arm from recent sonar images.

Tour boat skipper Marcus Atkinson was out in Loch Ness' Urquhart Bay when he saw a sensor blip show up on his sonar fish finder.  The object, which was five feet wide and about thirty feet long, was down at a depth of about 75 feet, and seemed to be following the boat.  Here's the image in question: 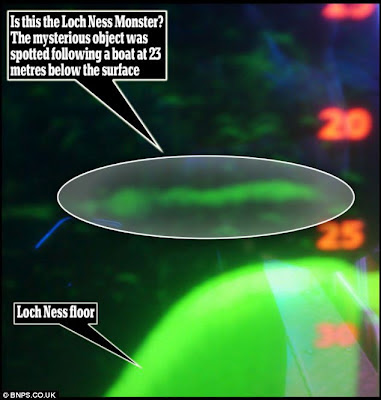 "I was dropping customers at Urquhart Castle and then got my boat out of the way of the other tour companies," Atkinson told reporters.  "I moved out into the water and looked at the sonar and saw this image had appeared.  The device takes a reading of the depth and what is below the boat every quarter of a second and gradually builds up a picture, so it covered a time of about five minutes.  The object got bigger and bigger and I thought 'bloody hell' and took a picture with my mobile phone.  There is nothing that big in the Loch. I was in shock as it looked like a big serpent, it’s amazing. You can’t fake a sonar image.  I have never seen anything returned like this on the fish finder.  It is a bizarre shape to me. I have shown it to other experienced skippers and none of us know what it was.  I have seen a lot of pictures in 21 years of being here but this is the clearest image yet. Undoubtedly, there is something in the loch."

The image was the winner of the Best Nessie Sighting of the Year Award.

Okay, now what's a skeptic to think about this?

First, I've always put Nessie down a bit on the plausibility list -- below, for example, Sasquatch -- because there's a good scientific argument against its existence, to wit: the claim that a plesiosaur survived in Scotland for the last 65 million years ignores the fact that between then and now, Scotland has more than once been underneath a great big glacier.  The last one receded only 10,000 years ago, and is thought to be the origin of the lake itself.  If you think that an enormous aquatic dinosaur made it through the various Ice Ages, you have to be able to explain how it either (1) somehow escaped being turned into a Plesiosaur Popsicle despite being buried under hundreds of feet of ice, or (2) got into Loch Ness after the ice receded, at a time when the sea level was a great deal lower than it is now and it was an even longer trip over land from the nearest large body of water.  Additionally, Loch Ness is what is called an oligotrophic lake -- it is very low in dissolved nutrients, and therefore is largely devoid of life.  There are simply not enough fish in Loch Ness to support a breeding population of thirty-foot-long aquatic dinosaurs.  None of these objections is usually addressed by Nessie aficionados.

But presupposing that there is some explanation for all of this that I'm missing, what did Marcus Atkinson see on his fish finder?  I have to admit that if I'd been in his shoes, "bloody hell" would probably have been only the first, and mildest, exclamation I would have said, and I would have gotten my boat out of the water so fast that it probably would still be embedded in the nearest beach.  Be that as it may, the image does deserve an explanation.

The unfortunate thing, of course, is that Atkinson was alone on his boat when it happened.  I'm trying to be open-minded here and refrain from commenting on (1) the fact that this is pretty convenient, given the controversial nature of his claim, not to mention (2) the fact that the fame he's now getting for having taken this image are now significantly higher than he could have expected to get as a humble tour boat operator, and (3) the fact that it's the beginning of tourist season in the Scottish Highlands, and (4) the fact that there's a new tourist attraction opening this year called "Cruise Loch Ness," designed as monster-hunting trips, run by... none other than Marcus Atkinson.

Okay, so maybe I didn't try all that hard to refrain from commenting upon those things.

And, of course, there's the problem that there's another plausible explanation of the image.  Dr. Simon Boxall, of the National Oceanographic Centre at Southampton, told reporters that it is incorrect to think of sonar images as analogous to a standard photograph:  "The picture is built up slowly as the boat moves," Boxall explained.  "So it’s not a snapshot, and thus the image is not an image of a single object unless it is very still."

So is Atkinson's image a fake?  No, Boxall says, but it also isn't a plesiosaur.

"The image shows a bloom of algae and zooplankton that would exist on what would be a thermocline.  Zooplankton live off this algae and reflect sound signals from echo sounders and fish finders very well.  They will appear as a linear 'blob' on the screen, just like this.  This is a monster made of millions of tiny animals and plants and represents the bulk of life in the Loch."

So sorry, Nessie fans, but it looks like if this is the Best Nessie Sighting of the Year, it's pretty lame.

Now, understand that if it did turn out that there was a plesiosaur in Scotland, I would be thrilled.  I was one of those kids who loved prehistoric animals, and I've never really gotten over it.  But I just think that the evidence, sadly, is mostly in the "nope" column.  Too bad, because even if you're a microbiologist, you have to admit that it is a proven scientific fact that dinosaurs are cooler than zooplankton.
Posted by Gordon Bonnet at 2:34 AM