All I need is the air that I breathe

I think my most common thought, while reading a lot of woo-woo writing, is "Learn some damn science before you pretend you know what you're talking about."

Okay, I know that sounds pretty arrogant of me, as if I always know what I'm talking about.  I don't; I make mistakes as often as the next guy.  But one thing I do try to do is research what I'm writing about, find out what science and experimentation have shown, before I launch off into thin air.

I use the "thin air" metaphor deliberately because of a website discovered by a student of mine, a frequent Skeptophilia contributor with a sharp eye for searching out nonsense.  And this time, she found a doozy.  The title of this website, "CO2 and Oxygen in Evolution of Air on Earth and Health," by itself caused some puzzled eyebrow-raising, but nothing like the actual content -- because its author, Artour Rakhimov, seems to be in serious need of basic training in human physiology.

The gist of this website is that all of the medical problems you've ever experienced were caused by having too much oxygen, and too little carbon dioxide, in your tissues.  Yes, you read that right.  Furthermore, we "hyperoxygenate" during times of high activity because we evolved during a time when there was less oxygen in the air, and we had to breathe harder.  Now, hyperventilation is killing us:


Appearance of the first vertebrates (about 550 millions years ago) and the development of prototypes of human lungs took place when air was made up of only about 1% O2, while having much higher percentage of CO2 (Maina, 1998), likely over 7%. Normal air today has many times more O2  (about 20%) and only a fraction of the CO2 (0.03%). However, our cells now still live in the air that existed hundred millions years ago: “But the cells of animals and humans need about 7 % CO2 and only 2% O2 in the surrounding environment. This is the way how our cells live: cells of the heart, brain, and kidneys” (Buteyko, 1977).

Yup.  We still live in "hundred million year old air."  That's why my knees hurt and I have sinus problems.

Anyhow, there we were, millions of years ago, happily consuming our "main nutrient" -- yes, this is what he calls carbon dioxide -- when along came plants to mess everything up:


However, the main parameter of our environment, our air, had dramatic change during later stages of our evolution due to advance of green life that transforms CO2 into O2 during photosynthesis.  We can see that air had dramatic change during evolution. It now has too much oxygen and almost no CO2. Hence, the chief parameter of our environment (we can survive for days or weeks with no water or food, but only for minutes with no air) became abnormal in its composition. It is only existence of our lungs that protected us from extinction. Nature could not anticipate this cardinal change in air, but it did provide us with the means for survival.

No, apparently he doesn't know that photosynthesis predated aerobic respiration as an evolved metabolic pathway.  How exactly our ancestors could have evolved to use oxygen before there were photosynthesizing organisms there to produce oxygen, I have no idea.  Nor do I know how they survived.  I have this strangely amusing image of dinosaurs crashing about in a completely plant-free ecosystem, gasping for breath, and cursing the fact that they'd appeared too soon. 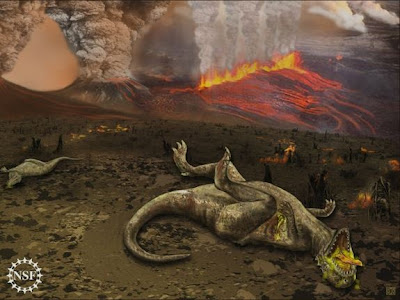 Could there be any truth to this?  The answer is "no."  Raising carbon dioxide levels in your blood is called "respiratory acidosis" (carbon dioxide in solution in your blood plasma creates a weak acid, carbonic acid, dropping the blood pH).  This, in turn, is the signal to your brainstem to speed up your breathing rate.  Put simply: carbon dioxide levels, via their effects on your blood pH, are how your body keeps track of how fast you need to breathe.  Slowing down your breathing, or rebreathing exhaled air, will just make you feel uncomfortable, and stimulate the unpleasant sensation that you need to breathe faster.

Don't believe me?  Check out sources here and here -- the latter source stating that humans start showing signs of hypercapnia (carbon dioxide toxicity) at an inhaled air concentration of 3%, and that at 7% -- the level recommended as healthy by Artour Rakhimov -- you will experience "labored breathing, headaches, tinnitus, as well as impaired vision... You are likely to become confused in a few minutes, followed by unconsciousness."

Rakhimov himself seems pretty confused on the topic.  Maybe he's been breathing too much carbon dioxide.

See why I yelled at my computer several times while reading all of this?  Of course, Rakhimov couldn't hear me, and it wasn't because of the tinnitus.  But still, I find the whole thing immensely frustrating, especially given the fact that this is hardly the only idiotic pseudo-medical idea out there -- in fact, I've got another one planned for Monday, to the effect that the problem isn't the air, it's the water.

It's got too little hydrogen in it.  Two hydrogens to one oxygen just isn't enough.

I can barely wait.
Posted by Gordon Bonnet at 5:03 AM