I've commented before how the advent of the internet has changed information transfer -- both in good ways (such as the availability of databases for quick fact-checking) and bad (such as offering a rapid, and virtually unstoppable, conduit for bullshit).  What I want to look at today is the way that the internet has changed how we view ideas and innovation -- again, in good ways and bad.

In the past, informal groups of like-minded individuals generally coalesced in some kind of formal setting -- a school, a church, a community center.  Now, there are places like Reddit where people, most of whom have never met, come together to discuss everything from gaming to world news.   This is all to the good, of course; I check several "subreddits" daily, including the ones that specialize in stories on science and skepticism.

The problem is, of course, like-minded people are... like-minded.  Groups form that seem to have the sole purpose of reinforcing the opinions that the members already had.  (And for every group, there's an equal and opposite group.  Check out "Conspiracy" and "Conspiratard" for a pair of good examples.)

Reddit isn't the only place this happens.  The same devolution into self-reinforcing silliness can even infect groups that started with the best of intents.  Take "Kickstarter," for example.

Kickstarter started out as a way for people with great ideas in any field, but who lacked the funds to see them realized, to get small donations from large numbers of people.  From their front page, the organizers of Kickstarter say,

Kickstarter is a new way to fund creative projects.

We’re a home for everything from films, games, and music to art, design, and technology. Kickstarter is full of projects, big and small, that are brought to life through the direct support of people like you. Since our launch in 2009, more than 3.9 million people have pledged over $577 million, funding more than 39,000 creative projects. Thousands of creative projects are raising funds on Kickstarter right now.

There's no doubt it's a groundbreaking idea.   CNN called Kickstarter "paradigm-shifting" -- which is certainly apt.  But the problem is that once you've opened up the gates to anyone, you've opened up the gates to... anyone.  The field starts widening to include people who are, to put not too fine a point on it, wingnuts.  Take the Kickstarter proposal by Peter Fred, for example, that has as its aim making an anti-gravity device:


The gravity theory that I am trying to promote has the fundamental hypothesis that gravitational phenomena is the result of transferred momentum produced by "stopped wind" a term which will be described. We already know a lot about momentum and the dynamics of wind.  Thus the fundamental idea of my theory is further interpretable in terms of familiar physics.

Of course, there's the obligatory declaration that everything we think we know about physics is wrong:


This lesson from the past seems to be lost on today's scientists who seem once again to be championing an unphysical idea that is supported by widespread observation.   The unthinking acceptance of the observationally supported "strange" and mysterious  idea that mass can warp space or that it can attract other mass has resulted in a preposterous universe where 95% of it is little understood.   This situation does not call for hordes of experimenters spending billions keeping the ancient basic mysterious hypothesis in place.  What it calls for is a lone self-financed theorists working for years the attic trying to come up with an idea that would replace the idea mass can attract other mass or warp space.

He then goes on to explain what he believes to be the real mechanism causing the pull of gravity, which is that cool air is "attracted to" warm air, causing lift.  To illustrate this, he uses the following diagram, which apparently comes from a middle school Earth Science text, with some added clumsy application of Photoshop:

Note that he has simply blurred out the return arrows, showing the complete movement of air in the convection cell -- so that it looks like some mysterious force is making the cool air over the ocean move toward the warm air on land.  (For those of you who haven't had any atmospheric science, what's actually happening is that the warm air is rising because of a change in density, and the cool air from the ocean is being pulled in to replace it; the reverse happens at high altitudes, creating an "overturning" of air between the land and the ocean.)

So, what's my problem with this?  A crank has a silly idea.  Big deal.

Well, the big deal is that it was launched two weeks ago and he's already raised almost $500, presumably donated by people whose training in physics ended in sixth grade.  As with the Conspiracy subreddit, wingnuts attract other wingnuts.  Now, I know that he's unlikely to reach his goal ($15,000), and by the policy of Kickstarter, if the goal isn't reached no one loses their money.  But my worry is twofold: first, dumb ideas gain credibility by appearing here; and second, Kickstarter itself loses credibility by hosting them.

Maybe I should temper this, however, with the admission that the same kind of altered approach has changed the publishing industry -- and has allowed me to e-publish my own fiction (note the handsome lineup of book covers on the right of your screen, ready for your Kindle or Nook).  And while this change has, in some sense, opened the floodgates to people publishing garbage, it has offered an entrée to talented writers who became frustrated with the gatekeeping aspect of the old agent/publishing editor route.  And there's a Darwinian aspect to all this; lousy novels can't compete with good ones, and get lost in the morass of self-published manuscripts after having sold copies only to the writer's significant other, parents, and best friend.  Likewise, ideas such as the aforementioned antigravity device simply don't get enough money to launch.

So maybe the fact that the bad ideas on Kickstarter won't get funded is its saving grace.  I have to admit that there have been some cool projects that have succeeded; consider the 3-D Pen (you should definitely watch the video on this one), the workout shirt that changes color to show your muscle activity, and, of course the Cthulhu knitted ski mask: 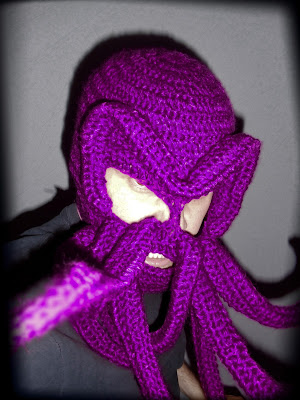 So there you are.  Look around at some of the Kickstarter projects -- there are some really interesting ones.  Whatever else you might say about it, Kickstarter is a unique approach to funding innovation, just as e-publishing is to writing, and Reddit is to the formation of intellectual communities.  And if each of those things comes with a downside, what doesn't?  It's just another feature of our technological evolution, an outcome of human intelligence that never fails to fascinate and surprise me.
Posted by Gordon Bonnet at 3:07 AM