So, in our last installment of Learning About Chemistry From People Whose Last Science Class Was In The Seventh Grade, we found out that breathing air causes all of the diseases known to man.  Today we will hear about how drinking water is slowly killing us all.

Man, with all of the air we breathe and water we drink, it's a surprise that the human race isn't extinct by now.

This latest sermon from the Church of Wingnuttery ties into the whole anti-fluoridation movement.  You probably are aware of the controversy surrounding fluoridation of water to prevent tooth decay; despite multiple peer-reviewed studies that have shown that this is safe and effective (read two of them here and here), there are people who think that fluoridation is basically the government's way of slowly murdering us all.  (Of course the government wants to kill all of its citizens.  Don't make me use the word "sheeple" in your general direction.)  Further, because of the presence of fluoride minerals in soils and bedrock, fresh water is naturally fluoridated, with a concentration averaging around 0.2 ppm.  Seawater has concentrations ten times higher than that, and aquatic animals seem to be able to tolerate it just fine.

So, fluoride is pretty safe, in low doses, and will save you the cost and trauma of multiple trips to the dentist.  But don't take my word for it.  Don't take the scientists' word for it, either.  No, instead, you should trust the likes of "April," who wrote an article for the website Starseed411 called "How Does Your Drinking Water Affect You?" that should be inscribed forever in the annals of Making Shit Up.

April starts out with a chemistry lesson:


We have all known all our lives that our drinkng [sic] water supply is H20, 2 parts hydrogen and 1 part oxygen. There is an old book called Natural Philosophy by: G.P. Quakenbos, A.M., entered according to act of Congress in the year 1859, by G.P. Quakenbos, the Clerk Office of The District Court of The United States, for the Southern District of New York. This book states that towards the end of the 18th century water was found to be a compound substance made up of a combination of oxygen and hydrogen, combined in the proportion of 1 to 8. Meaning 1 part oxygen and 8 parts hydrogen. H80.

I knew it!  I knew there was something wrong with my well water!  It just isn't hydrogen-y enough.

So, anyway, if water is supposed to be eight parts hydrogen to one part oxygen, how did it end up as familiar old H2O?

The answer, of course, is fluoridation:


Fluoride was infused into the water to destroy and remove 6 parts hydrogen. Our water supply affects us by hardening our pineal gland, by age 12 the pineal gland is calicified [sic], and by adulthood it is atrophied.

That nasty old fluoride!  Stealing away 75% of the hydrogen from our water, and hoarding it all for itself!  And making our pineal glands go all... crusty.  Terrifying!  But what effects does this have, and what can we do about it?


The pineal gland (third eye) is the seed of our soul and our connection to the spiritual, physical world, and higher frequencies. This gland is our power source. The pineal gland is like a built in wireless transmitter. when the pineal gland becomes awaken, learning abilitys are heightened; enhanced creativity; intuition; triggered psychic abilities, and experience bliss. Fluoride in the drinking water seals these capabilitys [sic]. You can awaken your pineal gland through eliminating bad sugars, processed foods, and fluoride from your body.

Well, that explains why I've experienced so little bliss lately.

Now, lest you think that "April" is just one aberrant wacko, take a look at the highly scientific editorial "Water is Poison" (gist: fluoride rots your bones, destroys your immune system, and is being used by the government for purposes of "eugenics"), not to mention "Fluoride: The Lunatic Drug" (which reads like a compendium of anti-scientific craziness ranking right up there with the best of David Icke).  The upshot: fluoride doesn't prevent cavities.  It causes cancer, osteoporosis, Alzheimer's disease, and kidney problems, not to mention making you "stupid, docile, and subservient."

In any case, let's clear a few things up.  Fluoride, in the miniscule doses you'd get from either naturally or artificially fluoridated water, is completely harmless, and has little other effect than strengthening your tooth enamel.  This has been repeatedly demonstrated to the satisfaction of panels of scientists trained in human physiology.  Of course it's poisonous in large doses; so are a great many other things, including caffeine, aspirin, and table salt.  If you don't understand how this works, there's this thing called a dose-response curve that you might want to investigate that will hopefully clarify the point.

Also, it bears mention that if fluoride is as horrible as these people claim, there should be a fairly strong correlation between living in a community that fluoridates its water and terrible health.  So, take a look at this map, from the National Center for Health Statistics: 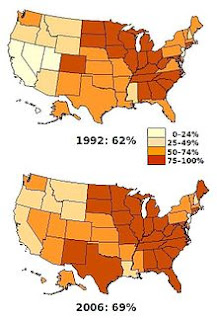 Percentage of communities, state-by-state, that fluoridate their water

So, from this map, we should expect the greatest number of sane and healthy people should be in states like New Hampshire, and that the citizens of New Mexico should be... worried.  But take a look at this map of cancer incidence, from the Center for Disease Control:

Do the words "no correlation" mean anything to you?  And none of the other diseases the anti-fluoridation crowd wants to attribute to fluoride in the water -- Alzheimer's, osteoporosis, type-2 diabetes, and kidney failure -- show any greater degree of correlation.

Unfortunately, I wasn't able to find maps showing the incidence of being "stupid, docile, and subservient."  Maybe the Center for Disease Control isn't putting that data out there because it's too damning, I don't know.

Anyhow, that's about all I have time for today.  It's amazing to me that there are people who swallow this stuff (figuratively speaking; I hear that anti-science nonsense is toxic in high doses!).  But judging by the controversy that erupts every time a community puts fluoridation up to the vote, apparently there are a great many people who aren't swayed by research, and instead are convinced by alarmist rhetoric.  I suppose I can't do much about that, but I do hope that they have their dental insurance paid up.
Posted by Gordon Bonnet at 3:01 AM