There is something going in on North Carolina right now that I bet a lot of you haven't heard about.  It's gotten barely any press coverage, which is weird, because if it doesn't scare the absolute hell out of you, you're not thinking hard enough.

A bill, filed by two Republican lawmakers from Rowan County on Monday (and backed by nine others), had as its intent to supersede the United States Constitution with respect to the establishment of a "state religion."  The bill was written by Representatives Carl Ford (R-China Grove) and Harry Warren (R-Salisbury), and says, in part,

Backers claim that the bill is in response to President Obama's moves to establish universal health care and to alter gun laws, and they characterize it as fighting "federal tyranny."

Now, before you start writing letters, allow me to mention that this bill died yesterday afternoon in committee.  But the fact that it got as far as it did is like a dash of cold water down my back.  And if you think that this is a feint, or a political move intended just to "send a message," consider what Michael Bitzer, a professor of political science at Catawba College in Salisbury, had to say about the bill: "[I]t is attempting to appease to a certain base of supporters here in Rowan County, but also probably throughout the state, that believe very firmly in the needs for religious liberty."

Now wait, Dr. Bitzer, let me get this straight: allowing North Carolina to establish an official state religion, and thus compel prayers in schools, prayers before governmental functions, and (presumably) state control over what can and cannot be taught in science classrooms, is a move toward religious liberty?  Can I just take a moment to remind you of what theocracies are actually like? 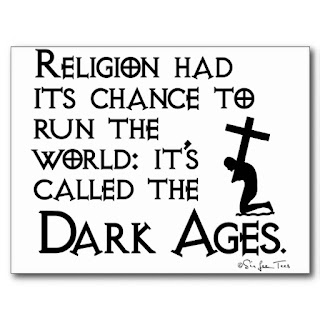 Because a move toward a Christian theocracy is what this is, of course.  No one in his or her right mind believes that all religions in North Carolina will be given equal respect.  This is just the old "America is a Christian nation" thing, rebranded as some kind of fight against the power of the federal government.  Take a look, for example, at the billboard campaign that has begun, in support of this move: 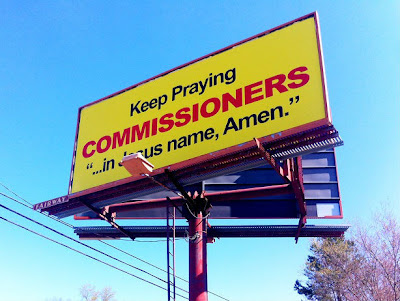 Many local churches have been vocal in their support of the bill, and vow to continue the fight now that this iteration of it will not be voted on.  "It's very exciting," minister Bill Godair of Cornerstone Church in Salisbury told WBTV on Wednesday.  "I was thrilled about it...  I know this money could have been given to the poor and I feel like we do so much and I feel like we elected these men, the fact that they're standing together unified, all five of them, I just feel like that we have to stand with them."

I find the whole thing profoundly frightening.  In this time, when there are large, organized, well-funded private groups that have as their official goal mandating the infiltration of religion into every aspect of our lives -- determining what we can do with our own bodies, how we have to teach our children, what we can and cannot say in public -- that this sort of thing is now being considered by government officials is horrifying.

And for those of my readers who are yourselves Christian, I hope you have the sense to recognize why this would be a terrible move.  Because, after all, it's not like Christianity is one thing; it is a diverse system of belief, a term that encompasses everything from the liberal, bible-as-metaphor approach of the Unitarian Universalists to the hard-as-nails biblical fundamentalism of the Pentecostals.  (Notwithstanding the fact that some of these sects say about the others that they are "not true Christians.")  So, if there's to be a state religion, which one?  If you take just that parts they all agree on, there won't be much left.  One of them has to be chosen as the actual state religion -- which should rightly terrify members of the others.

In any case, keep an eye on North Carolina, and other states in the "Bible Belt."  This fight isn't over yet.  And for those atheists, rationalists, agnostics, and freethinkers who somehow survive down there -- speak up.  Now.

Before it's too late.
Posted by Gordon Bonnet at 4:25 AM