My wife and I just got back from a trip to Boston -- my first visit to that fascinating and historical city.  And as part of our visit, we got to participate in a ghost tour.

"Before I buy tickets for this," she said last week, her finger poised on the "Enter" button on her laptop keyboard, "you have to promise me one thing."

So I reluctantly agreed, she bought the tickets, and Monday evening, we dutifully showed up in the chilly, windy evening in front of Faneuil Hall.  There we met our guide, Jim, who represented Boston Ghost Tours -- and also a "real" ghosthunting group, RTS Paranormal Investigations, of Wrentham, Massachusetts.

I decided right away that I wouldn't blow my cover and announce my status as a doubter.  I played along, even generating some naive-appearing enthusiasm at the beginning of the tour as Jim told us that Boston was one of the "most haunted cities in North America."  It was kind of a heady experience, being a spy, although the fact that Jim was dressed in Revolutionary War garb kept reminding me of what happened to Nathan Hale.

The first thing Jim told us was that there was no guarantee that we'd see a ghost.  Ghosts, he said, were notoriously unpredictable and uncooperative.  "After all," he told us, "ghost hunting isn't like whale watching."  Which, technically, is correct, because whales exist.  But I didn't mention that.

So off we went.  Our first stop was the site of the Boston Massacre, which we observed from the warmth of the glassed-in foyer of Bank of America.  We were told that bunches of people had seen the ghost of Crispus Attucks, one of the first victims of the Revolutionary War, and that the likely reason Attucks had appeared in the early years of the 21st century (he apparently hadn't been seen before then, and hasn't been seen in the last couple of years) was that they were renovating the area.  Ghosts, apparently, don't like renovations, which I can sympathize with.  We just finished remodeling our bathroom, and it was a nuisance.  Why ghosts care, I don't know, but apparently they do, and Crispus Attucks dealt with his frustration by dying over and over in front of the Old State House.  I guess everyone handles stress in his own way.

After that, we went to the Old South Church, where we heard about a British soldier who shot at a ghostly priest and then got flogged for discharging his weapon without orders.  After this rather cautionary tale, we went to the Omni Parker Hotel, "the most haunted building in Massachusetts."

We went up to the second floor, which seemed to mostly be comprised of meeting rooms and was empty unless you counted the three-dozen-odd middle school students, all in eye-damaging yellow t-shirts, who were touring the place.  So the ambiance wasn't exactly what it could have been.  We waited until the teenagers had departed and the airborne hormone levels had returned to normal to view the main attraction -- the "Charles Dickens mirror," a gilt-framed mirror in which many people have seen ghostly reflections.  Some have even taken photographs of it, only to find that there's the ghostly image of a man in the picture -- a man who hadn't been there when the photo was taken.  So, naturally, my wife had to give it a try herself: 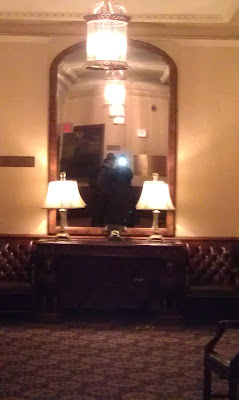 And lo and behold, if you look carefully, you can see -- to the left of her (you can't see her face as it's being obscured by the camera flash) -- the figure of a ghostly man wearing a brimmed hat, staring into the mirror!

So we didn't see a ghost in the mirror, and believe me, I tried.  I stared into that thing like a madman, but all I saw was my own rather questionable face.

Afterwards, we went out into a large open space on the second floor, and Jim regaled us with tales of "Room 303," which "some of the hotel staff deny even exists."  They apparently tell people it's a broom closet.  But then he told us that it still gets rented out, which seems odd, for a broom closet, but what do I know about hotel administration?  In any case, Jim said we couldn't go up to room 303, but if we did -- man, there is one malevolent spirit there.  It grabs people's ankles while they're sleeping, and one time slapped one of the hotel staff across the face.  But even though we couldn't visit room 303, as a consolation prize we would get to see if there were any ghosts about -- using equipment, and everything.

So Jim got out a flashlight and an electromagnetic field detector (he said that an electronic stud finder, or even a compass, would also work).  He turned the flashlight on, and handed the EMF detector to a teenage girl who was on the tour and told her to ask any ghosts who were present to show themselves by turning off the flashlight or making the detector light up.

Giggling nervously, the girl did as Jim requested.  Silence fell in the group, as we looked around us at the opulent carpeting, the old woodwork, the empty halls receding into shadow.  And then... suddenly...

... nothing happened.  And after a while, nothing continued to happen.  There was one momentary tiny blip on the EMF detector, which Jim said was probably caused by the building's WiFi.  "Always look for the rational explanation first," he said, which seemed like good advice to me.  In fact, my rational explanation for no results is that there's nothing there, but Jim disagreed, apparently, and asked a couple of other members of the group to request that the ghosts make themselves known.

Which they did.  But the ghosts weren't cooperating that night, so we reluctantly packed it in, and Jim walked us all out of the hotel and back to the MTA subway station.

Anyhow, all in all, it was an entertaining evening, and I encourage any of you who are visiting Boston to check it out (you can make reservations at the link I posted above).  Maybe you'll have better luck than I did.  You'd almost have to, actually, given that I didn't see a damn thing and nearly froze to death on the outdoor part of the tour.  But I have to say that Jim is quite a storyteller, and even if I'm not the most receptive of audiences, I did enjoy myself and hardly rolled my eyes at all.

Well, a little, but I tried to keep it to a minimum.  You never know how ghosts are going to react to being laughed at.  For example, I suspect that the one in room 303 would not be amused, and however much I'd like to see a ghost, I think I'd prefer not to get slapped in the face by one.

Posted by Gordon Bonnet at 4:37 AM