Well, the targeted ad software has done it again.

It's my own fault, really.  I shoulda known that having two posts in a row about aliens was a bad idea.  On the other hand, it'd be nice if the software that chooses ads for my blog would give the same weight to words like "bullshit," "nonsense," "foolishness," and "wingnut" as it does to "aliens," "UFOs," "psychics," and "ghosts."

In any case, almost as soon as I hit "Publish" on the second post, I began to get reports from friends who are regular readers, informing me of a couple of ads that keep popping up that are... interesting.

The first one is entitled "16 Powerful Extraterrestrials Message to Humanity," which tells us that having a conversation with an alien is easy:


What if it was possible to have a conversation with a highly advanced, benevolent extraterrestrial being? What kind of wisdom would this entity have for humanity?

Extraterrestrials do not need to land on your front lawn to share their wisdom. There are other, more subtle, yet far more effective ways to convey their very important messages.

Its been happening for quite some time. We invite you to open your mind…

My general feeling is that these folks' minds are so open that their brains fell out, but maybe I'm just not highly advanced enough to understand all this.

So, what if I was to open up my consciousness to aliens?  What would I learn?  Here's a sampler:


Many of these should resonate with you, here are a few:

• Consciousness creates matter.
• Each individual creates his or her own reality through thoughts, beliefs and expectations.
• There is no death. Consciousness exists forever.
• We all are one, from the same divine source.
• We are spiritual beings but have chosen to exist as physical humans.
• In this life there are no victims, only opportunities to evolve.
• We can control reality through the powers of the Universal Mind.
• Our spiritual purpose is to choose from selfishness or altruism.
• Souls reincarnate to eventually experience God-realization.
• Feelings & Intuition are more important as a source of guidance than intellect.
• We are here to remember what we already know.
• Physical reality is an illusion.
• Light cannot exist without the dark. One cannot understand one thing unless he or she understands its opposite.
• God is self-experiential, in that it is the nature of the Universe to experience itself.
• God is not fear-inducing or vengeful, only our parental projections onto God are.
• The very best way to maximize your evolution while on this planet is through regular meditation.

The extraterrestrials messages are amazing! It feels like I already naturally knew some of these.

Consciousness creates matter, and physical reality is an illusion, eh?  Let me just throw a rock at your head and see if you still believe that afterwards.

And the whole thing about "evolution" just torques the hell out of me.  Can we get one thing straight, here?  Thinking you are in contact with an alien isn't evolution, it's a symptom of a mild mental illness.

But if my obviously poorly-evolved reality doesn't convince you, you can buy what they're selling (of course they're selling something) -- "Equi-Sync Brain Wave Meditation Software."  Starting at only $58.  Heckuva deal.


The second ad was a promo for an upcoming film release for something called Sirius.  I didn't know about it, so I did some research, and found this.  It turns out that the premise of the film -- which alleges to be a documentary, i.e., true -- goes something like this:

UFOs have been in contact with humans throughout history.  The military knows all about this, and is trying to stop us from finding out about it because the aliens have promised us an unlimited source of free energy, and that would be bad for the military.  For some reason.  There's a baby alien that has been discovered, that looks like this: 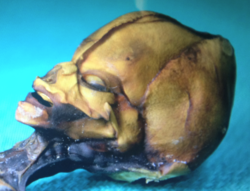 Its DNA has been analyzed, and it has been shown to be extraterrestrial in origin.

Now, you'd think that'd be enough.  But no, there's more:

The director of the film, Amardeep Kaleka, made it public that he was raising funds for his show along with Steven Greer, of the UFO Disclosure Project -- and shortly after, Kaleka's father was killed in the Sikh Temple shooting near Milwaukee.  Was the government trying to shut Kaleka up by killing one of his family members?

In a word: no.  The killer, Michael Page, was a white supremacist.  End of story.  As far as the other claims: according to some skeptics who've looked at the photographs, the "baby alien" is almost certainly a mummified baby spider monkey; given that we have no alien DNA to compare it to, the assertion that a certain sample of DNA is "extraterrestrial in origin" is ridiculous; and there's no such thing as "free energy," as the Second Law of Thermodynamics is strictly enforced in most jurisdictions.

But of course, I predict that this won't affect the movie's success one little bit.  I predict that people will love Sirius, with the result that more "baby alien" websites will pop up everywhere, and I'll be hearing about it for the next ten years.

Anyhow, that's all I've got for today.  I encourage you to keep your eyes on the ads on my blog -- in my estimation, they've missed the target far more often than they've hit it.  Maybe one day they'll improve the software, and I'll start getting ads for books by Richard Dawkins and Neil deGrasse Tyson videos.  Now that I could "open my mind" to.
Posted by Gordon Bonnet at 4:30 AM