One of the most frustrating types of woo-woo belief is the kind that is, by definition, out of the reach of any sort of experimental testing.  It's a rare thing; most odd, unsupported claims are at least theoretically accessible to controlled scientific investigation.  Psychics, mediums, dowsing, aura manipulation, homeopathy, astrology, cryptozoology... all of those have been the subjects of scrutiny by actual scientists using the lens of experimentation (and all, by the way, have failed thus far to generate any results that would be convincing to a skeptic).

But a claim that is inherently untestable isn't common, and that's including if you throw in religious belief.  I mean, even the creation and "great flood" stories from Christian myth can be analyzed on the basis of evidence.  So it takes a special talent at woo-woo thinking to devise something that you couldn't test experimentally even if you wanted to.

I ran into a good example of this yesterday on a website sent by one of my loyal readers, a page on the website School of Awakening entitled, "What Is Tachyon?"  At first, it would seem that they're just using the word "tachyon" to mean the same old tired "life force energy frequencies" you see on so many woo-woo websites:


Tachyon is the energy of existence, without it there is no life on earth. Tachyons are sub atomic particles, which travel faster than the speed of light. Scientists refer to this as Zero Point Energy.

Tachyon is also known as universal or source energy, or cosmic consciousness. Tachyon has a negative entropic effect, which means it brings order out of chaos. It is constantly regenerating and harmonising by transforming chaotic, energetic structures into new levels of order.

Interesting that they start out, as so many woo-woos do, by borrowing a term from theoretical physics.  The word tachyon was coined in 1967 by physicist Gerald Feinberg to describe a hypothetical particle that travels always faster than light and therefore breaks the laws of causality (i.e., if it existed, you could use it to send signals into your own past).  Most scientists consider the tachyon only an interesting fiction -- no evidence for its existence has ever been found, and there are a great many compelling arguments against it.

But that doesn't stop the School of Awakening people:


The more stagnation or blockages we have, the weaker our energetic system, and the less we are able to regenerate. The result is entropy (premature ageing [sic]). Tachyon can boost the energetic system by regenerating and reversing ageing through its negative entropic qualities.

Well, that sounds awfully nice!  I'm 52 and no great fan of aging, frankly.

Then they tell you about some "tachyonized" products they're selling that can bring "tachyons" into the water and food you consume, or right directly into your body:


Tachyonization™ is the process of transforming normal products into Tachyon antennae. These products are then used in a treatment, for instance: Tachyon cells (small, flat, triangular shaped, coloured glass) are attached to painful points in the body and Tachyon Life Crystal (TLC) bars (fist sized chunks of clear crystal which are used to sweep the body from head to feet)... You don’t have to be ill to have a Tachyon treatment or to benefit from using Tachyonized™ products. As Tachyon increases the life-force and youthfulness in cells of the body, Tachyon CD-shaped disks can be used to vitalise food or water. Placed on the fuse box they can neutralise electromagnetic frequency (EMF).

This, then, causes changes in an energetic system that everything in the universe can detect and interact with... except for humans (presumably because we're just kind of dumb):


All energy systems, except humans, are connected vertically with the Source and HIS/HER inexhaustible flow of universal life force energy, maintaining what we call the energetic continuum...  This structure we find with all life forms as a basic energetic matrix, which keeps our entire universe interconnected.

And we're given a list of positive results that will occur from all of this hocus-pocus:

Now, so far, how is this different from any other woo-woo nonsense out there?  Wouldn't this still fall into the realm of the testable?  The answer is no, and here's the really clever bit that sets them apart from your run-of-the-mill purveyor of pseudoscience:


A human system naturally goes through cycles of order and chaos on its path of evolution. When it is unable to adapt to more stress in its life the crisis comes to a peak. This is called a Bifurcation point.

At this point the body will either go into chaos (begin manifesting an illness which may have been latent for years), or it will move to better health. Using Tachyon will speed the energetic blockage to a bifurcation point and transform the problem, which may bring insights or understanding of the underlying cause.

See what they did, there?  You're supposed to buy all of the "tachyonized" crystals and disks and everything, because they (1) emit a particle that is inherently impossible to detect, which interacts with (2) an energy system in your body that is inherently impossible to detect, and that will result in (3) any physical conditions you have either getting better or worse depending on which path you needed to take at the "Bifurcation Point."

Oh, but by all means, you should buy the crystals and disks and all.  They have case studies.  They have testimonials.  All you have to do, apparently, is believe, and you can return to Kansas any time you want. 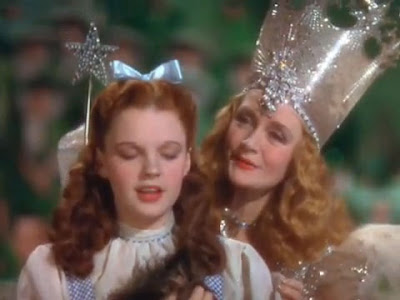 Of course, what bugs me here is that there are people with legitimate medical conditions who are being suckered by hucksters like this, and who aren't going to get the treatments they need because they would rather waste their money  being "tachyonized."  And in some sense, the people who are convinced by these snake oil salesmen are gullible enough that they have no one to blame but themselves if they get fooled.

But part of me still gets angry.  Getting rich off of people who don't understand how science works, who are swayed by big words and subtle pretzel logic, just isn't nice.  I know that there is no way to stop them; they've been too clever at crafting their argument so that it is experimentally irrefutable.  Staying with The Wizard of Oz theme,some days it'd just be nice if there was a skeptic's version to the Flying Monkeys, that could just... take care of things for me. 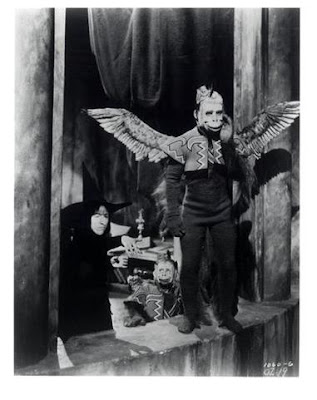 But I suppose, honestly, that that isn't nice, either.

The only answer, as always, is in getting people to understand how science works.  So, toward that end, I'd better wrap this up and go off to eat my un-tachyonized breakfast, and take my slower-than-the-speed-of-light car to school, where I can hopefully do my part in immunizing my students against falling for this sort of unscientific bullshit.
Posted by Gordon Bonnet at 3:16 AM