Yesterday I looked at a possible "alt-med" treatment modality that may actually work -- "Intranasal Light Therapy."  Today, I want to look at another odd claim, and one that also seems to have some sound research to back it up: the idea that some dogs are able to sense when people near them are about to have a seizure.

I have a personal connection to this one, because our neurotic border collie, Doolin, has a strange ability to recognize when my wife is going to get a migraine.  Now, Doolin's behavior is peculiar at the best of times, but in the hours before a migraine strikes, she becomes even weirder -- following Carol around, staring at her mournfully, and whenever she comes to a complete stop, Doolin presses herself up against Carol's leg.  Once the migraine hits -- which it invariably does -- Doolin won't leave her side until it abates. 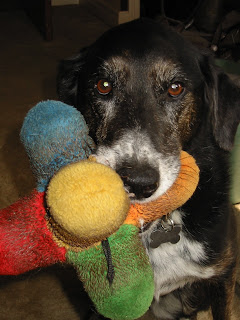 Doolin, the Migraine Dog, with one of her diagnostic instruments

Now, I know that one anecdotal report doesn't prove anything, especially that "dog behavioral weirdness" is hardly a quantifiable dependent variable.  But there have been peer-reviewed studies done (read two of them here and here) that indicate that some dogs are able to detect seizures before they begin, and potentially give their owners advance warning.

Here's the thing, though.  Once there are claims like this, the woo-woos get involved, and you get all sorts of wacky explanations flying around.  Here are a few that I saw, after perusing woo-woo sites as long as I could stand to:
So.  Yeah.  Predictably, I think all of the above are unadulterated horse waste.  But assuming that there is something going on, here -- and it very much appears that it is -- what are the dogs picking up on?

It's pretty well established that dogs can be trained to detect when a diabetic's blood sugar is too high, and the likely cue is that high blood sugar triggers ketoacidosis -- and results in chemicals being expelled via the breath that the dog could detect by smell.  While it's unlikely that seizures (or migraines) result in a chemical in the blood, and therefore in the sweat or breath, that a dog could sense, it's a possibility.  On the other hand, it's been suggested that dogs may simply be picking up on changes in mannerisms that occur prior to the onset of the seizure.  Dog behavior, and particularly their sensitivity to human expressions, has been studied extensively, and it's not too far a stretch to think that changes in a patient's demeanor prior to a seizure might be detected by a dog who knew the person well, resulting in changes to the dog's behavior that the owner might be able to learn to recognize.

Whatever is going on here, however, it's a pretty cool phenomenon.  I know that I feel more at ease knowing the Doolin the Migraine Dog is on the job.  On the other hand, most of what she spends the rest of her time doing is pacing around the house, looking guilty, sneaking onto the recliner when no one's looking, and bossing around our other dog, Grendel, so I'm not sure that her migraine-detection skills are quite enough to put her in the "useful" column just yet.
Posted by Gordon Bonnet at 4:20 AM