Yesterday, we saw an example of how woo-woos will embrace a warm fuzzy fiction in order to escape the hard work of learning science.  While I think this is a shame, and that said woo-woos are losing out on the thrill of actually understanding the universe, I have some sympathy for the desire to have the universe be like you would like it to be (not to mention the mental indolence that prevents you from sticking with the actual science until you understand it).

Unfortunately, however, there is a darker side to such things.  Sometimes the woo-woos lie outright.

I ran into an especially sad example of this yesterday, and it has to do with a bizarre claim by the "spiritual ascension" crowd.  These folks have taken a wafer-thin understanding of genetics and evolution, and onto this they have duct-taped all sorts of goofy ideas -- aliens, channeling, ESP, and a quasi-Buddhist "progress toward enlightenment."  Out of it has come a completely wacky amalgam that basically claims that some kind of "life force" is driving us to evolve into "higher beings," and that part of this "spiritual ascension" will involve activating parts of our DNA that are currently switched off.  Many of the proponents of this idiotic idea believe that we'll be able to tell the "ascended masters" from the rest of us slobs because they will have three, four, or even (in some versions) 1,024 strands per DNA instead of the standard-issue two.  (I.e., their DNA will not be composed of double helices -- it will be triple, quadruple, or 1,024-uple helices.)

Now, so far, this is just in the same realm as yesterday's post, wherein an alt-med wingnut claimed to be in psychic touch with alien whales -- weird but essentially harmless.  But this one took a turn toward the Dark Side of Woo-Woo with the claim by some of them to have discovered a child who is the first person who has this triple-stranded DNA, and thus represents the first step toward "ascension."

His name is Alfie Clamp, and he lives in Nuneaton, Warwickshire, England.  Listen to what Greg Giles, of the site Ascension Earth, had to say about this child in his post "First Child Officially Diagnosed With Three DNA Strands":


As we as a species approach the culmination of our ascension in 2012, our outdated 2 strand 'Double Helix' DNA must experience an upgrade. What has long been considered 'junk DNA' by the scientific community must now be reevaluated as the human species experiences an incredibly rapid advancement of our evolution. All throughout the existence of the human species on this planet, thee has never been gradual shift in our evolution, instead there have been a series of massive leaps. One of the more recent leaps in our evolution could never be explained by science, hence a name for this mystery was implemented instead, resulting in this phenomena being referred to as the 'missing link'. Human DNA is now evolving from a mere two strands (which are responsible for lower dimensional traits such as survival and pro creation), to three, four, and even twelve strands of DNA fully activated. A human with two strands of DNA activated is plugged into a 3rd dimensional reality which we have experienced here on earth. When a third strand is activated, a human can experience the fourth dimensional reality, and after activation of a fourth strand of DNA, the fifth dimensional reality can be experienced, which is precisely where we are headed in 2012. These third and fourth strands of DNA have remained dormant within the DNA structure, and are being activated throughout our planet by energies currently bathing our world. It is believed forerunners in our ascension process, known as Indigo Children have been born with three and four strands of DNA fully activated. The scientific community, which has shown strong skepticism towards new DNA theories, must now reevaluate their position as a two year old British boy named Alfie Clamp has become the first person in the world to be officially diagnosed with a third strand of DNA located in his seventh chromosome.

We are then treated to a picture of what this supposedly looks like: 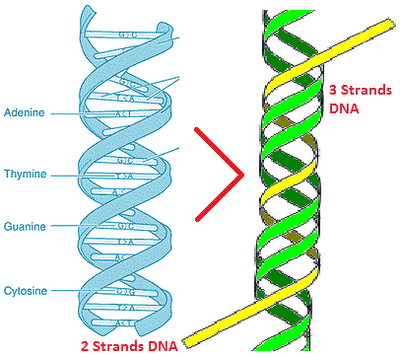 Esoteric Online went even further, in their post "Scientists: Our DNA is Mutating As We Speak!  We Are Developing Twelve Strands!"


I was amazed to read that the modern medical industry finally released to the press that the 'first human with 3 DNA strands' had been born. Of course, the case of little Alfie is the first one to be officially acknowledge by the medical community, but not the only one existent.

In fact, I've read years ago that independent doctors were already working with children who developed the third DNA strand. But are they different than the average human? I am absolutely delighted to inform you that they are very special and in fact all humans are mutating to a superior species, as we speak...

The changes are not known publicly, because the scientific community feels it would frighten the population. However, people are changing at the cellular level. I am working with three children right now who have three DNA helixes. Most people know and feel this. Many religions have talked about the change and know it will come about in different ways. We know it is a positive mutation even though physically, mentally, and emotionally it can be misunderstood and frightening...  These are children who can move objects across the room just by concentrating on them, or they can fill glasses of water just by looking at them. They're telepathic. You would almost think by knowing these children that they are half angelic or superhuman, but they're not. I think they are what we are growing into during the next few decades...  We are being changed physically from carbon-based beings with 2 strands of DNA into crystalline beings with 1,024 strands of DNA (eventually, in time), because only crystalline substances can exist on higher dimensional levels. But the immediate changes are from 2 to 3 DNA strands, and later into 12.

My first thought was that these people are merely deluded individuals who believe that the X-Men movies are historical documentaries, but when I started looking into it, I realized something more insidious was going on here:

They weren't delusional, they were lying.

I found what appears to be the original public-media article on Alfie Clamp's condition (here).  It was published in April of 2011.  In it, it says that Alfie doesn't have a third strand of DNA -- i.e., triple helical DNA -- he has a third arm on his seventh chromosome, which is not the same thing at all.  His chromosomes, like yours, are tightly-wound bundles of double-helical DNA.  His having an extra arm on a chromosome is basically an odd form of duplication, which is a chromosomal mutation in which genetic material appears three times in the genome (instead of the normal two).  Duplications, like all chromosomal abnormalities, are devastating to the individual (in fact, most never survive to be born).  And poor little Alfie Clamp, far from being a "superior species" that is "half angelic or superhuman," has had medical issues since the day of his birth.  He nearly died when he was only a few days old, his eyes didn't fully develop until three months after he was born, and he was a year and a half old before he was strong enough to roll over unassisted.  He is two now, and still requires daily medications just to help him digest his food.

The original story was intended to be inspirational -- the devotion of a pair of loving parents to a little boy whose physical condition was profoundly impaired, and whose problems are likely to be incurable.  And it was inspiring... until the woo-woos got a hold of it, and twisted it to buoy up their ridiculous concept of reality.  They are coldly, callously capitalizing on the tragic story of Alfie Clamp for one reason and one reason only -- they don't have any facts to back up their views, so they have to lie about a sick child's plight in order to gain credibility in the eyes of their gullible followers.


Is it any wonder therefore, that there is a great deal of anxiety and fear being felt because these changes are already in progress, even though most people are not conscious of it. Also, the changes to our physiological makeup are currently speeding up and there are MANY TEMPORARY PHYSICAL SYMPTOMS that are occurring in our bodies as a consequence of this...  Some of these symptoms are being felt by a great many people. Many are rushing off in panic to their doctor, chiropractor, herbalist, etc. and are usually told that there is nothing wrong with them. And this is the truth. For all these symptoms are just temporary and simply indicate that these physiological changes are occurring.... You aren't dying, you're just changing!

Somehow, I doubt Alfie's doctors, or his parents, would agree with this.

It's bad enough when woo-woos try to twist reality to fit their mythology, and then hoodwink others.  It's worse when they use their warped worldview to bilk the public out of their hard-earned money.

Worst of all, though, is twisting the story of a little boy's pain, and his parents' commitment, into "proof" for a false claim about the universe.  That they would sink to this level shows that what needs to ascend isn't the number of strands we have in our DNA, but the morality with which we treat the truth and our fellow humans.
Posted by Gordon Bonnet at 2:56 AM