The alien genetic code, and the hazards of overconclusion

One type of scientific error I find my students frequently make is "overconclusion."  This is when you take data that supports a specific conclusion, and draw from it a far more general conclusion than is warranted.  As a simple example, if you have found that marigolds produce more flowers when given a high-nitrogen fertilizer, it is an overconclusion to claim that all plants will react that way.

Woo-woos, I find, are especially prone to this -- many "alternative medicine" therapies are good examples.  Acupuncture is reported by a friend of yours to have had success in reducing his pain from an injury, so you conclude that it must be good for everyone, regardless of the source of the pain, and also useful in treating everything from angina to warts.  Lycopene, an antioxidant found in tomatoes, is reported in some studies to reduce the incidence of cancer, so all antioxidants are cancer preventatives -- or cancer cures.  And so on.

The problem gets worse when the original data comes from a realm that hardly anyone really understands.  And I found an excellent example of that just yesterday, in a pair of articles -- one which uses an abstruse method on an unfamiliar data set to support a rather wild conclusion, and a second one that takes that conclusion and runs right off the cliff with it.

The first one, which was published on April Fool's Day but appears to be legitimate, is called "Is An Alien Message Embedded in Our Genetic Code?"  It describes the research of two Kazakh geneticists, Vladimir I. shCherbak and Maxim A. Makukov, who claim to have found in the human genome a "mathematical and semantic signal" that indicates the storage of non-functionally-based (i.e. not evolutionarily derived) information in our DNA.  "Simple arrangements of the code reveal an ensemble of arithmetical and ideographical patterns of symbolic language," they wrote in the journal Icarus.  "Accurate and systematic, these underlying patterns appear as a product of precision logic and nontrivial computing."  This, they conclude, is because we are the product of panspermia -- our genetic code originated elsewhere in the universe, and this is the signature of the alien species that seeded our DNA here.

My first thought: wasn't that the whole idea behind the Star Trek: The Next Generation episode "The Chase?" 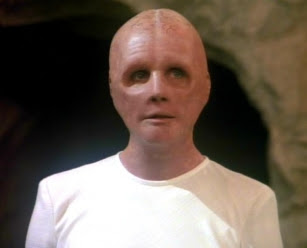 Definitely one of the best episodes -- but I was under the impression that the entire series was fiction, weren't you?

Now, other than that, I am drastically unqualified to comment upon whether the scientists have really stumbled upon something astonishing.  This is despite my training in evolutionary genetics -- which, you would think, would be enough.  In order to determine if shCherbak and Makukov have actually found evidence of life's extraterrestrial origins, you have to be able to show, mathematically, that an apparent encoded signal is meaningful.  This is decidedly non-trivial.  As I've commented before, given a sufficiently long string of characters, you can always pull a meaningful pattern out as long as you mess about with it long enough and are willing to change the rules as you go (see my post on the alleged "Bible Code" here).  And three billion base pairs is a helluva long string.

So, the bottom line is: unless you are an expert in information theory and mathematics, you are unqualified to comment upon whether shCherbak and Makukov are on to something, or whether they have made the same mistake as the one made by the yo-yos who said that the bible predicted the 9/11 attacks.  But that, of course, hasn't stopped anyone from commenting, especially the UFO and alien crowd, once they finished having multiple orgasms over the idea that terrestrial life might come from the stars.

So, here's where the overconclusion comes in, starting with an article in News.Com.Au entitled, "WE ARE STAR PEOPLE: Scientific Proof We Were Created By Aliens."  And from them we find out that the Kazakh scientists didn't just show that terrestrial life might have a signature in its DNA that indicates its alien origins, they showed that humans specifically were created by a superintelligent alien race:


Scientists from Kazakhstan believe that human DNA was encoded with an extraterrestrial signal by an ancient alien civilisation...  In a nutshell, we're living, breathing vessels for some kind of alien message which is more easily used to detect extra terrestrial life than via radio transmission...   So if we are just vessels for alien communication, exactly what kind of secret message are we carrying in our DNA?  And if we were the creation of aliens, who created them?

Premature questions to ask, don't you think, given that the mathematicians haven't yet weighed in on whether shCherbak and Makumov are correct?  And if they're correct, what it actually means?  Man, I just can't wait to see what Diane Tessman and Dirk VanderPloeg are gonna do when they find out about this.

So, that's it for today.  It'll be interesting to see whether anyone sits down with this data and goes through the hard work of checking the paper's conclusion.  If I were a betting man, I'd be putting my money on a statistical analysis of the "message" showing that it is very likely to be random -- i.e., not a message at all, but an artifact of the algorithm they used.  As appealing as the idea in "The Chase" was, I always thought that it was more of a justification by the writers of Star Trek as to why all of the aliens, who had evolved on other worlds Where No One Had Gone Before, just looked like humans with rubber alien noses and strange accents.  If their idea pans out, it would be pretty earthshattering -- but even then, we'll have to figure out what the message actually means, both literally and figuratively.

Or, as Gul Ocett said in "The Chase," "As far as we know, it might just be a recipe for biscuits."
Posted by Gordon Bonnet at 2:47 AM