Three hundred years ago, a lot of the medicines that were used to treat human conditions were identified using the "Doctrine of Signatures."  The idea was, if something -- especially a part of a plant -- looked like a human body part, it must be useful for treating diseases of that part.  It also gave a lot of plants their names; most of the plants that have names that end in "wort" (from the Old English wyrt meaning "herb") come from this idea, and it's why we have plants like lungwort, spleenwort, liverwort, ribwort, bladderwort, navelwort, and nipplewort.  And, for the record, I didn't make any of these up.  It's also why a lot of plants have scientific names that come from human body parts, such as the orchid.  Orchis is Greek for "testicle."

I didn't make that up, either.

I should probably mention at this juncture that a lot of the patients who were treated using the Doctrine of Signatures died.  It did lead to the discovery of some plants that did have important therapeutic use -- such as digitalis -- but more often than not, the various worts are useless, and some are actually toxic.  So it's a good thing for those doctors that they lived before the concept of "malpractice lawsuit" was invented.

The problem is, some purveyors of "natural medicines" are still using the same sort of argument today, and people are still falling for it.  Take the whole "pine pollen extract" thing that has been making the rounds lately.  Given that pollen is the male spore of a plant, and produces the sperm cells, guess what they say it's used for?  Yup!  Got it in one!


Raw pine pollen is the richest seedbed of testosterone derived from plants; since it is the male sperm of pine trees, it fosters plush growth in all living creatures, from trees and plants, to animals, to humans. Some experts claim that pine pollen is an ingredient in certain pharmaceuticals designed to treat low testosterone levels in both men and women.  [Source]

I'm not sure if I want to experience "plush growth," myself.  The whole thing reminds me way too much of the Moss Guy from the movie Creepshow. 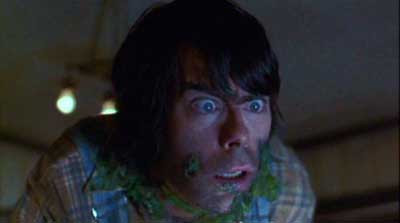 Be that as it may, is there any evidence that pine pollen actually works to make you, um, Stiff Like The Mighty Pine Tree?  The answer seems to be "not much."  I did a fairly intensive search, and found one source that said that I should use it because my "manhood is grumbling with hunger... for nature's invincible transmitter of life energy;" another that said that pine pollen is "adaptogenic, so it will cater to exactly what your body needs and treat any area of distress;" and a third that said that after a pine pollen cocktail, you might radiate so many Sex Vibes that you'll end up having your leg humped for 45 minutes by a female dog.  Although why that's a selling point, I have no idea.

Then, of course, you have your anti-aging cream made from "raspberry plant stem cells," which works because "(p)lant stem cells are equipped with regenerative properties, and can 'self-renew.' They can either form a large reservoir of unspecialized cells, or upon stimulation grow into 'differentiated' plant elements and become a new root, leaf, flower or other part of the plant."  I'm assuming that they're talking in some vague way about parenchyma, the unspecialized tissue that all plants have (and which is usually used for starch storage, as "filler" cells in stems, and for regrowing damaged tissue).  The idea here being, I suppose, that if plants have cells that regenerate organs, if you smear those cells on your face, you'll regenerate youthful skin, or something.

It bears mention that I also looked for any peer-reviewed research that showed any results for either pine pollen or "raspberry plant stem cells," either for or against.  No luck.  My sense is that the people who are selling this stuff are making up the whole thing as they go along.  So, who knows?  Maybe the next big seller will be a kiwi fruit extract for male pattern baldness, I dunno.

So, anyway, that's our modern-day answer to the Doctrine of Signatures.  In today's litigious society, though, sellers of snake oil have to be a little more careful than the people who sold Decoction of Lungwort for bronchitis three hundred years ago.  This is why, on virtually all of these products, you'll see a tiny little label that says "Not intended to treat, cure, diagnose, or prevent any disease or ailment."  Which will protect their asses quite nicely.  No application of Salve of Buttockwort needed.

Okay, I did make that one up.
Posted by Gordon Bonnet at 2:10 AM