Vietnamese mystery rocks, and the fear of admitting ignorance

Yesterday I ran across a story that is mostly remarkable because of the last paragraph.

Entitled "Odd Rock Covered in Unidentified Hieroglyphics Rumored to Cast Spells," the article was written by Dana Newkirk, and appeared in an online compendium of "Forteana" called Who Forted?  (The "Fort" references, for those of you unfamiliar with this peculiar little slice of Americana, come from Charles Fort, an iconic figure in the investigation of the paranormal and "anomalous phenomena" in the early 20th century.)

Anyhow, the story starts off in an ordinary fashion, for this sort of thing.  We hear about a large rock in Vietnam, covered with carvings, that was donated to the Thuong Temple in Phu Tho in 2009.  Of course, as you might expect, it isn't the anthropological or linguistic significance of the artifact that is the point of interest here; there's got to be something weird going on with said rock, and in short order we find out that the residents of Phu Tho think the rock has "the ability to cast a strange enchantment," and are staying away from the temple because they're afraid of it. 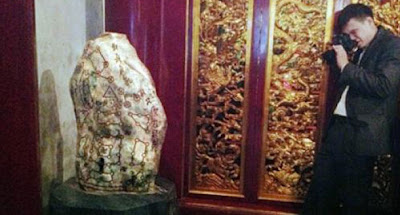 As far as what the carvings mean -- or even how old they are -- that's unknown.  "Unfortunately not much else is known about the strange rock or the ancient symbols covering its entire surface," Newkirk writes.  "Currently the province is compiling a scientific committee with the intention of studying the strange rock with the hopes of finding some answers regarding where it came from and what the strange markings might mean."

Okay.  So far, we've got a mystery rock and some superstitious people in a remote country.  Neither one is a rare commodity, and would certainly not warrant a mention by themselves.  But here's how Newkirk wraps up her article:


So, what the heck is it? A star map? Some kind of tool? Or is it just some really bored guy [sic] a few hundred years ago? We want to know what you think! Share your thoughts with us on our Facebook page, tweet us @WhoForted, or leave a comment below!

I'm pretty sure she meant "was it really just made by some bored guy a few hundred years ago," not that the rock itself was a fossilized person, but even that's not the point.  When I read the last paragraph, my immediate response was, "Why on earth is what I think even remotely relevant?"  I know nothing whatsoever about the "odd rock" except what Newkirk just told me; I can't find any mention of it anywhere except in Who Forted?  I know zilch about Southeast Asian archaeology, history, and linguistics.  My opinion on this topic would be completely worthless.

And yet, I'm sure that Newkirk will be inundated with opinions from ignorant individuals like myself.  Because -- and I have the sense that this problem is especially bad here in the United States -- everyone thinks it's their god-given right to have an opinion about everything, and to trumpet that opinion from the rooftops, regardless of how little in the way of facts they might know about the issue at hand.

I find this whole thing intensely irritating, because I run into it almost on a daily basis.  For example, just a couple of weeks ago, I was asked by a friend, "What do you think the federal government should do about the sequester?"  I responded, "I have no idea.  I don't know nearly enough about economics or politics to weigh in."  My friend frowned and laughed at the same time and said, "Come on.  You must have some kind of opinion."

No, actually I don't.  And if I did, it wouldn't mean anything.  I'm pretty aware of the topics about which I am ignorant, and I try my hardest not to pretend I'm well-informed about them; and I don't have any particular problem with saying, even to my students, "I don't know the answer to that."  (In my classes, I usually follow it up with, "... but I'll look into it and see if I can find an answer for you.")  But I find that a lot of people are acutely uncomfortable with admitting ignorance, and feel the need to have an opinion on topics for which they should simply withhold judgment until they actually know what they're talking about.

I wonder if perhaps this is one of the negative outcomes of living in a representative democracy.  We have a "one person, one vote" system, in which my vote and the vote of the greatest genius in the country have exactly the same weight and the same effect on the outcome.  (Which, honestly, I am all in favor of.)  But this has the untoward consequence of giving people the impression that because every person's vote is worth the same amount, everyone's opinion is worth the same amount.  Which it clearly is not.  To make it even more obvious: if I were to talk to Stephen Hawking, and I were to say, "Professor Hawking, let me tell you what my views are on quantum physics," he would not be obliged to listen to me, and in fact would be well within his rights to tell me to piss off.  Democracy is a lovely model for governance,  but makes no sense at all when it comes to ideas.

Unfortunately, this whole thing pervades our thought processes all the way to the top, and is why we have people like Governor Bobby Jindal of Louisiana and Representative Paul Broun of Georgia blathering on about how evolution is "unproven" and "controversial," even though from their comments it's pretty evident that they haven't the vaguest idea what they're talking about.  And I find this especially appalling given that both men have reasonably decent science backgrounds -- Jindal has a B.S. in biology from Brown University, and Broun a medical degree from the Medical College of Georgia, so they should both know better.  Despite that, in the stories I linked (which you should definitely check out), Jindal says that creationism should be taught in public schools because we want kids exposed to "the best facts" and "the best science."  Broun was even more blunt, calling evolution "lies straight from the pit of hell."

Can anyone tell me why either of these men's opinions is in the least relevant, when they evidently have no knowledge about the topic upon which they are expounding?

So no, I won't tell you my opinion about the sequester, or about the Vietnamese mystery rock.  It wouldn't mean anything if I did.  And I might be prone to a lot of mistakes, but bloviating on a subject about which I am ignorant is one I try my best to avoid.

This always reminds me of the wonderful quote by Isaac Asimov, which seems a fitting way to end this post: 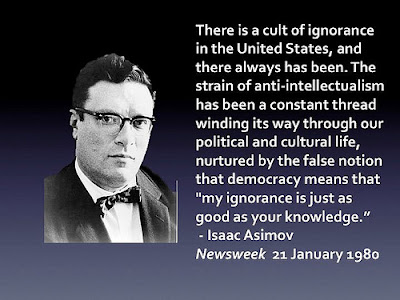