Given my habit of poking fun at the aliens-and-UFOs crowd, it may come as a surprise to you that I think it's very likely that there's intelligent life elsewhere in the universe.  I find the possibility breathtakingly cool -- to think that there are alien organisms out there, on a planet around another star, perhaps looking up into their night sky and wondering the same thing as we do, hoping that they're not alone in the universe.

It really seems pretty routine, forming life.  Many, perhaps most, stars have a planetary system of some kind, a significant fraction of those are small, rocky worlds like the Earth, and the basic building blocks of organic chemistry -- water, and compounds containing carbon, hydrogen, nitrogen, sulfur, and phosphorus -- appear to be abundant.  Once you have those, and some range of temperatures that allows water to be in the liquid state, organic compounds can be created, abiotically, in large quantities.  The first cell-like structures would probably appear post-haste once there are sufficient raw materials.

After that, evolution takes over, and it's only a matter of time.

The thing that fires the imagination most, of course, is contact with an alien race, a possibility that has driven science fiction writers for a hundred years.  The result has varied from the dreamy, benevolent, childlike aliens of Close Encounters of the Third Kind to the horrific killing machines of Alien and Starship Troopers, and everything in between.

The fact is, we don't know anything about what results evolution would have on a different planet.  A few features seem logical as drivers for any evolutionary lineage, anywhere -- having some means of propulsion; having a centralized information-processing organ; having sensory organs near the mouth, and basically pointed in the direction the organism is moving.  It's a little hard to imagine those not being common features for most species, no matter where they originated.

But other than that, they could look like damn near anything.  And how they might perceive the world, how they might think -- and more germane to our discussion, how they might look at us, should we run into one another -- is entirely uncertain.

This is why physicist Stephen Hawking raised some eyebrows a couple of years ago when he said that we should be afraid of alien contact.  In an interview, he said, "We only have to look at ourselves to see how intelligent life might develop into something we wouldn't want to meet.  I imagine they might exist in massive ships, having used up all the resources from their home planet.  Such advanced aliens would perhaps become nomads, looking to conquer and colonise whatever planets they can reach.  If aliens ever visit us, I think the outcome would be much as when Christopher Columbus first landed in America, which didn't turn out very well for the Native Americans."

Hawking isn't the only one who is worried.  In his wonderful book Bad Habits, humor writer Dave Barry also weighed in on the topic when he found out that we had sent what amounts to a welcome message on the exploratory spacecraft Pioneer 10: 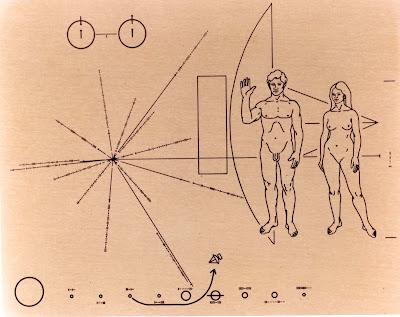 Dave Barry thinks that the plaque, which was the idea of the late great astronomer Carl Sagan, was a colossally bad idea:


(W)hen they decided to send up Pioneer 10, Carl sold the government on the idea that we should attach a plaque to it, so that if the aliens found it they'd be able to locate the Earth.  This is easily the stupidest idea a scientific genius ever sold to the government...  (I)t's all well and good for Carl Sagan to talk about how neat it would be to get in touch with the aliens, but I bet he'd change his mind pronto if they actually started oozing under his front door.  I bet he'd be whapping at them with his golf clubs just like the rest of us.

Dave Barry even thought the choice of the art work on the plaque was ill-advised:


(The plaque) features drawings of... a hydrogen atom and naked people.  To represent the entire Earth!  This is crazy!  Walk the streets of any town on the planet, and the two things you will almost never see are hydrogen atoms and naked people.  Plus, the man on the plaque is clearly deranged.  He's cheerfully waving his arm as if to say, 'Hi!  Look at me!  I'm naked as a jaybird!'  The woman is not waving, because she's clearly embarrassed.  She wishes she'd never let the man talk her into posing naked for this plaque.

Well, for those of you who agree with Stephen Hawking and Dave Barry, let me tell you about something that may allay your fears.

A new Kickstarter project has begun called Your Face in Space, which has as its goal (if they can raise sufficient funds) saving the Earth from alien invasion by launching a satellite into space with a bunch of pictures of people making angry faces.  It will be an "awesome scary satellite," the website proclaims.  "Something that will make aliens think twice about invading us."  They're asking people to send them money, and also jpegs of themselves making mean faces.  (The website has a selection of some of the best they've received thus far.)  Plus, they've reworked the Pioneer 10 plaque into something more, um, off-putting to potential alien conquistadors: 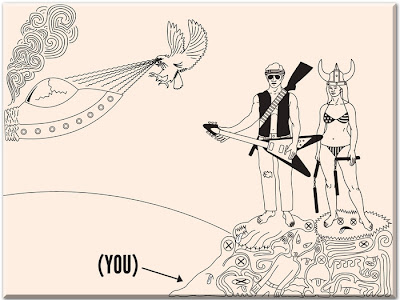 Yes, the woman is wearing a horned Viking helmet and is holding nunchucks, the man has a bandanna, a Rambo vest with no shirt, a machine gun, and a "flying-V" electric guitar, and they're standing on top of a bunch of dead aliens.

And the American eagle is taking down a spaceship by shooting laser beams out of its eyes.

Well, if that doesn't dissuade the aliens from invading Earth, I don't know what would.

So, anyway, as much as I would love to find evidence of alien life, and even have them contact humanity, have to admit that I sympathize with the worries that Hawking, Barry, and the originators of the Your Face in Space project have voiced.  While I would find it incredibly exciting to meet an alien race, I draw the line at letting them land their spaceship in my back yard and use their ray guns to vaporize my pets.  So maybe the Kickstarter project is a good idea.  In any case, I encourage you to donate to their project, or at least send them your photograph making a scary face.

You can't be too careful.
Posted by Gordon Bonnet at 2:42 AM