A shot in the arm

The website of the World Health Organization states it this way: "Immunization is one of the most successful and cost-effective health interventions and prevents between 2 and 3 million deaths every year."  UNICEF places the lives saved at closer to 9 million, and states that "vaccines have brought seven major human diseases under some degree of control - smallpox, diphtheria, tetanus, yellow fever, whooping cough, polio, and measles."

The members of my family understand the impact vaccination has had all too well.  My grandfather's only full sister, and his eldest half-sister, died five days apart of measles at the ages of 22 and 17; and my mother had polio as a child, stunting the growth in one leg and leaving her with a permanent limp.  (Still, my mom was one of the lucky ones; less fortunate polio survivors ended up partially paralyzed and spent the rest of their lives in an iron lung.)

Even with all of this, there's still a scare campaign going on that "Big Pharma" is secretly trying to kill you every time you get a shot.  Just last year, we saw Stephanie Messenger's book Melanie's Marvelous Measles published, and it's still available on Amazon despite 147 (out of 200) one-star reviews: 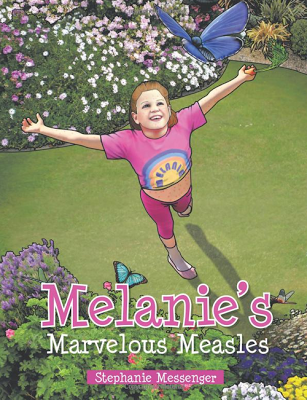 In it, we get to read about little Melanie, who is just delighted to get measles so she can "heal naturally."  The book, Messenger says, "was written to educate children on the benefits of having measles and how you can heal from them naturally and successfully."  Even worse is The Mother magazine, which in its March/April issue had an article that stated that "Measles will only develop in a body that is low on vitamin A," and suggests eating more carrots as a preventative.  We are also told that "people don't die of measles -- they die of medical mismanagement of the fever."

Too bad my Aunt Anne and Aunt Emelie didn't know about all this, isn't it?

Unfortunately, though, the anti-vaxxer nonsense has caught on, based in equal parts on fear, a poor understanding of science, a sneaking sense of suspicion about the ethics of medical/pharmaceutical corporations, and a large dose of the naturalistic fallacy.  Most recently, the whole issue has hit Canada, where just yesterday the British Columbia Medical Journal released, in its May issue, an article stating that Health Canada has just granted license to "homeopathic vaccines" called "nosodes" -- and yes, they are the usual homeopathy bullshit, made from substances diluted past Avogadro's limit, which are therefore pure water.  Nevertheless, Health Canada saw fit to give their stamp of approval to "nosodes" for influenza, measles, pertussis, and polio, despite its stated mission to "(test) products for safety and efficacy before allowing them to enter the market."

So now, we don't just have people avoiding vaccines, we have them taking fake vaccines.

And we're beginning to see the effects of this foolishness.  Wales is still recovering from a measles outbreak that sickened 700 people last month, resulting in at least one death.  Two days ago, the BBC ran a story that states that "Levels of vaccination have been too low in some countries, particularly in rich western European nations...  Experts said it was not too late to hit the target, but 'extraordinary' effort was needed."  The WHO and other medical oversight groups are concerned that in many places, we have dropped below the levels needed for herd immunity, the number of immune individuals needed in a population to prevent the disease from catching hold.  Once that happens, epidemiologists warn, an epidemic is almost certain to occur.

It's hard to combat all of this.  Prominent voices like Andrew Wakefield and Jenny McCarthy have spent enormous amounts of time, energy, and money sowing suspicion and drawing false correlations, and once you've activated the fear module in people's minds it's almost impossible to repair the damage.  Doctors are said to be hand-in-glove with corporate interests; skeptics like me are seen as shills or dupes.  If the government itself forces its citizens' choices -- compulsory vaccination programs for school attendance, for example -- it is claimed to be infringing on rights.  When epidemics occur, as in Wales this year, it causes a brief flurry of activity, but once the survivors recover, most people forget about it.  The fear remains that the anti-vaxxers are right -- perhaps the epidemic would have occurred anyway, even if everyone had been vaccinated, and then maybe there would have been all of these cases of autism to contend with.

Here, have a carrot.

I wish I had a good suggestion regarding what to do about all of this.  While I'm all for personal freedom, I really wish governments would step in and say, "Look, I'm sorry you have fallen for pseudoscientific superstition.  That's unfortunate for you.  Roll up your sleeve, please."  If this happened in enough places, maybe we could eradicate measles and polio, the way we eradicated smallpox in 1980.  While getting rid of diseases like the flu, which affect other mammals as well as humans, is unlikely, we could certainly get further along in stopping or slowing down epidemics.

Think of the human suffering this would eliminate, and the lives it would save.

Maybe it's time to apply some science and rationality, here, and not succumb to fear tactics, fallacious thinking, specious claims, and the "research" of outright frauds.  Wouldn't that be marvelous?
Posted by Gordon Bonnet at 2:54 AM