At the heart of skepticism is a philosophy that says, basically, "question everything."  I would add a few "especiallies:"
I ran into an excellent example of this just yesterday, with an article on The Liberty Digest titled, "U.S. Government Kills 100 Million People -- Deflects All Blame," by Truman Jackson.  My first thought was to wonder how 100 million people could have died without my noticing, but upon opening the link I found that he wasn't talking about something recent.

He was talking about the "Spanish flu." 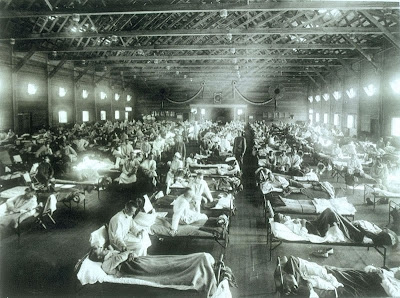 What followed was such a mixture of truth, half truth, and complete bullshit that the author should win some kind of award for Best Example of Journalistic Hash, 2013.  Here's his claim, to which I've added a few annotations of my own:


Consider this a history lesson. At the time, it was an experiment in attrition and public gullibility, and both experiments proved favorable to ‘the powers that be’ as far as the outcome obtained.

It’s referred to as the Great Spanish Flu Pandemic of 1918 in the history books, but there was nothing Spanish about this plague that killed between 20 million and 100 million people world-wide. [True.  It was the worst pandemic in modern history, rivaling or perhaps exceeding the 14th century Black Death.]  It was 100% U.S. Government controlled and engineered.  [Bullshit.]

In a nutshell, while mass troop movements were heading to Europe during WWI, the U.S. Government, through the Department of the Army, was experimenting with this really neat, and new for the time, technology, called vaccines.  [True.]  They were injecting flu vaccine, among others, into soldiers who were on their way to fight in the “war to end all wars.”  [False, and not only false, but impossible.  The first flu vaccines weren't developed until 1931, twelve years after the epidemic, and World War I, both ended.]

As everyone knows, most vaccines have a strain of that of which they are supposed to be preventing, and in this case, a common strain of flu common for the U.S. at least.  [True in essence.]

However, the strain was not common in Europe and the rest of the world and the other people who inhabited those countries had not had a chance for their immune systems to develop any defense against the U.S. flu strain.  [True, but misleading, because this more or less happens every year -- that's why there are epidemics.  If people had a "defense" against a strain, they wouldn't get sick.  It doesn't require some sort of deliberate attempt by the U.S. to spread the disease, the virus is perfectly capable of doing that on its own.]

The result was catastrophic, and some would say diabolical. Nearly 5% of the earth’s surface population at the time was killed by the outbreak of the flu.  ["Diabolical" implies intent, so while the percent mortality is accurate, the implication is not.]

How did Spain get the blame?

The ‘powers that be’ who were involved with the war made sure to keep a tight lid on the story of the flu. They feared world-wide riots should the populace learn the facts behind how far and wide the outbreak had spread. However, Spain was “neutral” during the war, and they openly reported on the havoc the virus was causing in their country. As a result they ended up getting the blame for the outbreak, and nothing could have pleased the ‘powers that be’ more. Remember, no good dead [sic] goes unpunished.  [Bullshit.  Although the author is correct that the identification of Spain as the origin of the epidemic was probably false, no one was trying to "blame Spain" for some sort of geopolitical reason, any more than calling the 1968 "Hong Kong flu" was an attempt to blame China.]

Many experts who have written on the “Spanish” influenza which killed upwards of 100 million people, believe the virus actually originated at an Army base in Kansas.  [Half-truth.  The origins of the virus are still uncertain.  Epidemiologists have proposed France, Austria, and China as alternate explanations, but the fact is, we don't know where it came from.]

So what we have here is the usual conspiracy nonsense, bolstered by people's fears of the side effects of vaccination due to the insidious work of such discredited nutjobs as Andrew Wakefield and Jenny McCarthy.

Of course, the timing of this article is no coincidence; the 2013-2014 flu season is just ramping up, and people are considering whether to get vaccinated.  Anti-vaxx hype is big this year, although studies debunking the supposed horrible side effects of vaccines clearly demonstrate that the risks of vaccination are vastly outweighed by the risks of contracting preventable diseases.  Flu kills thousands of people yearly, and most years the vaccine does a pretty good job of preventing the disease.  (I have to use the qualifiers "most" and "pretty good" because the flu virus is notorious for mutating, and the vaccine is based upon a best-guess of what the strains that year will be.  Every so often, the researchers don't get it right, and there's a strain prevalent that the vaccine doesn't immunize you against.  Even so, they get it right far more often than they get it wrong, and the benefit still far outweighs the risk.)

But no wonder that this article is making the rounds of social media, anti-vaxx websites, anti-government websites, and conspiracy theory websites.  It hits all of my "especiallies;" it caters to preconceived biases and fears, it's sensationalized, it has nothing in the way of data proving its points, and it claims that the reason for the lack of evidence is a conspiracy.

The nice thing about the Internet Age is that we have virtually instantaneous access to information, and with a little bit of training, anyone can learn to sift the truth from the bullshit.  Start, for example, by looking only at sources that are peer-reviewed -- it's not a guarantee of accuracy, but at least you've raised the bar from the kind of tripe published in places like The Liberty Digest.  Ask questions, especially "how does the author know this claim is true?"  Question your own biases and assumptions.

And never, ever accept what someone says without evidence.
Posted by Gordon Bonnet at 2:49 AM