Something I fight continuously, as a teacher, is the idea that the most important thing is THE ANSWER.

It's the fault of the way education is usually conducted, of course.  Whether because teachers were themselves taught that way, or because of expediency, THE ANSWER is always considered to be the critical thing.  It doesn't matter how you got there; process isn't the concern.  As long as you have THE ANSWER in the appropriate space, you get full credit.

The problem is, by the time students get to high school, I'm expecting that they'll be moving beyond that, and it's often a battle.  I've had more than one student say, "Just tell me what to write down," as if somehow that was going to engender understanding.  My frustration on this point is what resulted in the following actual conversation:

In my own defense, I wasn't simply trying to be snarky; it just gets tiring to know that my refrain of "I will not think for you" often falls on deaf ears.

I find myself wondering how deep this inclination goes, and if it's because as a culture, we're taught to expect that there always is a single correct answer.  The biblical maxim of "Ask and ye shall receive" is pretty deeply ingrained.  We're uncomfortable with not knowing.

We're even more uncomfortable where there may be no way to know.

I ran squarely into this with my genealogical pursuits a couple of days ago.  There's a pair of sisters who were amongst the founding mothers of Acadia (as people of French descent call Nova Scotia).  Their names are Catherine and Edmée LeJeune, and they show up in Acadia in the early 1600s.  (I actually descend, on my mother's side of the family, from both of them.)

No one knows where they were born, or who their parents were.  The early records simply aren't complete enough.  This has led to speculation that they may have been Natives -- there are numerous records of early French settlers marrying Native women.  Could it be that the LeJeune sisters were members of the Mi'kmaq, Maliseet, or some other Native tribe of eastern Canada?

The whole thing was a moot point for decades; like I said, the documentation simply does not exist.  This didn't stop rampant speculation on both sides of the question.  Instead of just leaving their origin as "unknown," people seemed to need to fill in the blank with something.

Then, along came mitochondrial DNA analysis.  mtDNA is only inherited through the maternal line, so any matrilineal descendant of either sister should pinpoint their origin.  Matrilineal descendants (several of them) were traced, offered up blood samples, and the results all agreed; Catherine and Edmée were of the haplotype U6a7a, a signature that is characteristic of North African ancestry. 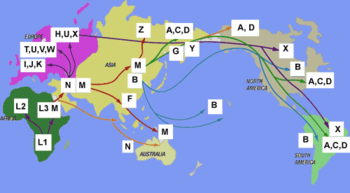 In my mind, this seemed to settle it.  The Moors made significant inroads into southwestern Europe in the Middle Ages, and there are huge numbers of people in Spain, Portugal, and southern France who have North African ancestry.  Catherine and Edmée most likely were born in France.  But that wasn't good enough; the people who had already decided that they were Native weren't content to let it rest.

Enter Dr. Howard Barraclough "Barry" Fell, professional zoologist and amateur archaeologist and linguist, who in 1976 published a book called America B.C.: Ancient Settlers in the New World.  In it, using the cherry-picking lexicography favored by people who aren't actually trained in linguistic analysis, Fell came to the conclusion that the Mi'kmaq orthography, one of the only pre-Columbian North American writing systems, was descended from none other than...

Now I hasten to state that most linguists consider Fell to be a well-meaning but misguided amateur.  (For a particularly insightful take-down of his conclusions, check out this site, courtesy of linguist and scholar Richard Flavin.)  But this hasn't stopped sites like "Mi'kmaq/Ancient Egyptian Connection" from surfacing, wherein we find that the ancient Egyptians made it not only to Nova Scotia, but all the way to Illinois and... Australia!

Now, I know the Egyptians were pretty cool.  But if you're gonna make a claim like that, I'm gonna need something more than a few chance correspondences between words and symbols before I buy in.

But the "have an answer at all costs" crowd wouldn't let it lie, especially once the Mormons got involved, and used Fell's so-called research to support their contention that the Native Americans were descendants of the Ten Lost Tribes of Israel.

Why can't we just say "we don't know?"  Why can't we focus on the reality -- the Mi'kmaq and other Native groups made their way to North America at some unspecified time in the past, and (more specifically) Catherine and Edmée LeJeune had some North African ancestry somewhere -- and consider how awesome the process of knowing is?  We can actually use blood samples from distant descendants of long-dead individuals to determine the movements of groups of people thousands, or tens of thousands, of years ago.

Not cool enough, apparently.  We need THE ANSWER.

Now, let me be clear on this: there's something to be said for having a correct picture of what's going on.  But when there's uncertainty, it's critical to be comfortable with a partial answer, and even more critical to understand the whole context of knowledge within which we are working.  In the long haul, I'm happier knowing about mtDNA and the migration of human groups than I would be just to have a final answer to fill in for my distant foremothers' birthplace.

But unfortunately, I appear to be in the minority.
Posted by Gordon Bonnet at 2:21 AM